Addressing the design issues involved when supplying a low-to-moderate level of regulated current at a higher voltage from a lower-voltage source.


LEDs are current-driven components with a modest voltage drop — under 2 V — so why would you need to worry about high-voltage sources when supplying LEDs? LEDs are current-driven devices, and an individual LED requires between 20 and 50 mA of current, while a high-brightness LED (HB LED) may need 100 mA or more. High voltage is needed because LEDs are often wired in series, parallel, and series/parallel arrays (Figure 1), and the series string of LEDs will require a voltage source that is at a slightly higher potential than the sum of their individual diode drops. 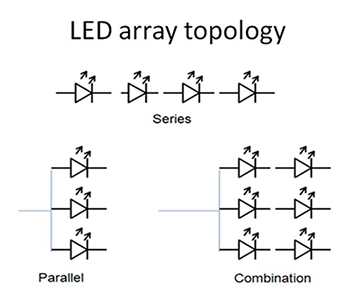 Figure 1: An array of multiple LEDs can be wired in many combinations of series, parallel, and series/parallel configurations; each configuration brings trade-offs in voltage and current requirements, current and color balance, and impact of short-circuit or open-mode LED failure.

Why not just drive the LEDs directly from a low-voltage current source? There are several reasons: As a result, even though LEDs are current-driven, low-voltage loads, you will need to consider the driver’s voltage rating as well. By looking at series-only, parallel-only, and various series/parallel combinations, designers can make different current-versus-voltage trade-offs.

Issues with current sources and voltage drive are not new: industrial and plant/factory engineers have been dealing with it for many years in another context. It is standard practice to use a signal of 4 to 20 mA for sensor and control loops, as the low-impedance current loop has much less sensitivity to noise and EMI that a voltage signal has. The designers of these systems therefore specify “compliance voltage,” which is the maximum voltage that the current loop needed to support at 20 mA (but that terminology has not carried over to LED drive). For example, a 20 mA process-control loop with 500 Ω resistance needs a minimum compliance-voltage rating of 10 V (plus some more for headroom).

In a design that strings 20 LEDs in series, such as in signage, backlighting, or illumination applications, the voltage drop across string with 2 V LEDs will be 20 × 2 V = 40 V. Thus, the LEDs will need a current source that can deliver the LED current of 20 to 50 mA (or perhaps more) at somewhat above 40 V to provide a headroom cushion, such as 50 V. If the supply cannot deliver the required current at this voltage, its output current will “droop”; the LEDs will be starved of current and thus be dim and off-color, or not illuminate at all.

If the LEDs are powered from a supply connected to the AC line, the sourcing problem is fairly straightforward, solved with a converter topology such as the constant-current DLG70PS700-A supply from XP Power (Figure 2). This AC/DC supply operates directly from 90 to 305 VAC, and delivers up to 70 mA at a compliance voltage between 50 and 100 VDC, as long as you stay within the 70 W dissipation rating. This current and voltage rating is sufficient for a variety of LED-array configurations, such as fifty 2 V, 50 mA LEDs in series, or three parallel strings of fifty 20 mA LEDs, and many other combinations. 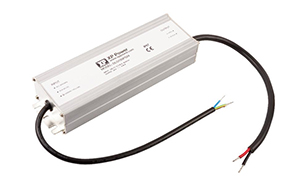 Figure 2: When powering LEDs from an AC line, a standard current-source supply, such as the DLG70PS700-A from XP Power, will handle both technical and regulatory/safety requirements easily.

The more difficult LED-drive challenge comes when the source voltage is at a relatively low value, and must be boosted while also delivering the required current. Fortunately, there are efficient boost-topology ICs that can simplify the design issue.

One example is the LM3492 from Texas Instruments, available in a thermally enhanced, 20-pin, 4.5 × 6.5 mm HTSSOP (Thermally Enhanced Thin Shrink Small-Outline) package (Figure 3). This DC/DC converter provides programmable LED current from 50 mA to 200 mA, for two individually dimmable LED strings. It operates from 4.5 to 65 V, and its output can also reach 65 V, with dissipation of 15 W (a typical configuration is a total 2 × 14 LEDs at 150 mA). It is qualified for automotive design-ins targeting LCD-panel backlighting, which operates from a nominal 12 V source, but which can drop down to 8 V when starting and go as high as 14 V (or more) when charging (plus it must tolerate severe transients on the DC rail).

Another IC that addresses the boost-regulator LED requirement is the Linear Technology LT3599, TSSOP (Thin-Shrink Small Outline), as shown in Figure 4, available in thermally enhanced 32-pin (5 x 5 mm) QFN (Quad Flat No-Lead Plastic) package and 28-pin, 4.4 x 7.8 mm packages. This 2 A step-up (boost) DC/DC converter can drive four strings of LEDs with up 120 mA total from a source ranging from 3.1 to 30 V, with an output that can reach 44 V. Its switching frequency is fixed in operation, and is pre-set by the user via a single resistor from 200 kHz to 2.1 MHz. 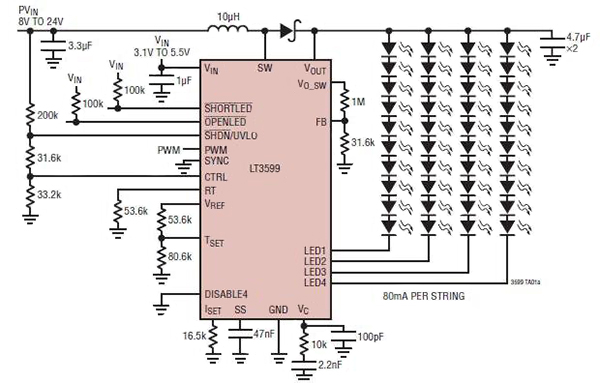 Figure 4: The LT3599 from Linear Technology Corp. can drive up to four LED strings with 120 mA current total, with output voltage up to 44 V; the DC/DC switching frequency is user-set via a single resistor.

As an additional benefit, it automatically regulates and maintains the current sourcing even when the input voltage goes higher than the LED output voltage. This is useful when the input-side DC rail is poorly regulated, or if the engineer wants to use the same part for different designs. The LEDs can be dimmed over a 20:1 range using either an analog voltage on the control pin that decreases the LED current, or with a signal on a PWM (pulse width modulation) pin that implements duty-cycle dimming. The currents through the four strings remain matched to within ±0.5 percent (typical) and ±1.5 percent (maximum) over the -50° to +150°C range, making this device well-suited for automotive and other applications including touchscreen displays in gas pumps and other outdoor installations.

Regardless of vendor and specific device, these boost-regulator devices have efficiency in the 90 percent range. However, they do dissipate more-than-trivial power and their layout must accommodate thermal issues as the EMI-related switching noise that such DC/DC devices can generate. To ease the designer’s task, vendors often suggest PC-board layouts and tips that will manage both issues. For the LT3599, for example, Linear Technology shows a layout that minimizes the length and area of connections to the noise-critical switching-node pin, and places associated components in optimum configurations (Figure 5); they also strongly urge use of a ground-plane layer under the IC and associated components. 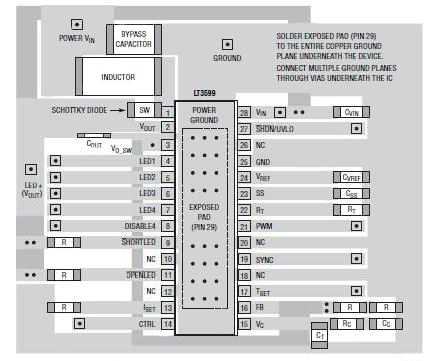 Figure 5: High-current and high-frequency regulator switching mandate careful layout of the IC, associated passives, and use of a ground plane; this diagram from Linear Technology for the LT3599 shows one “known-good” example as a suggestion.

Regardless of the IC or supply you choose, there are two higher-voltage points to keep in mind. First, the design must take regulatory constraints and safety concerns into consideration if the voltage is above 24 to 28 V (that’s where many such regulations begin to take effect). Second, the design must assume that an LED may fail. If the failure is a short, then only the failed LED in the series string will go dark, while the others stay on, and the voltage will decrease by one diode drop — which is no problem. However, if the failure is the more-common “open” mode, all the LEDs will go out and the output voltage or current source may rise to its maximum value, which may be above the 24-to-28 V, so safety will then become an issue; this is true even if the normal operating voltage is far lower.

LEDs are current-driven components with a modest voltage drop — under 2 V — but may need a current source that can deliver the current at a much higher voltage. This is because LEDs are often wired in parallel, series, or combination arrays —for applications spanning backlighting to area illumination— and a series string of LEDs will require a voltage source greater than the sum of the individual drops.

This article has examined design issues involved when supplying a low-to-moderate level of regulated current at a higher voltage (depending on the number of LEDs in the series string) from a lower-voltage source, called boost mode. The issues include basics of power sourcing, some available solutions, regulatory and safety factors, and the impact of LED failure. To meet these challenges, vendors have developed boost-regulator ICs that address the unique needs of multi-LED drive, dimming, and thermal concerns due to regulator dissipation.