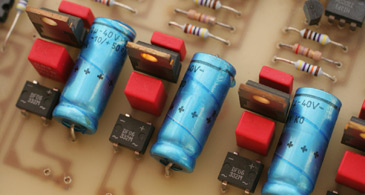 Many semiconductor and component manufacturers said that they expect low single-digit growth in 2012 because of the weak economy and sluggish demand for computers, cell phones, and some consumer electronics equipment. 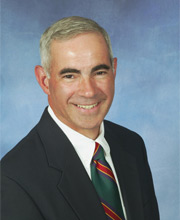 “Automotive continues to be strong. Electronic content in vehicles continues to go up,” said Dave Valletta, executive vice president, worldwide sales for Vishay Intertechnology.Many component makers are pleasantly surprised by demand for components from the auto industry, although some fear the segment may cool off.

“Automotive continues to be strong,” said Dave Valletta, executive vice president, worldwide sales for Vishay Intertechology, a major supplier of passives and discrete semiconductors based in Malvern, Pa. “Electronic content in vehicles continues to go up and we are shipping more systems like sensor systems.”

Automotive has been a bright spot for connector maker FCI, although 70 percent of FCI’s business is driven by computer and communications industries.

"There's just so much more electronics content vehicles today than there was five or ten years ago," noted Peterman.” A lot of content involves infotainment systems and safety systems such as collision avoidance and tire pressure monitoring among others.” 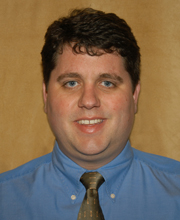 “We are finding that things like bus bars are making their way into vehicles,” said Brent Peterman, vice president and general manager, Americas Electronics Division for FCI.He added that electronics is growing not just "inside the cockpit,” but throughout the whole vehicle, helping drive interconnect sales.

“We are finding things like bus bars finding their way into vehicles. In the past may have been some cabling, but now power cabling and bus bars are showing up all over the place. And it's not just road vehicles, but farm equipment and other motorized vehicles," said Peterman.

Electric vehicles (EV) is a growing segment for some electronics component manufacturers and has potential for others.

“We have a strong position in EV,” said Russell Paik, worldwide director of product management for ITT Interconnect Solutions, headquartered in Santa Ana, Calif. “There’s a lot of opportunity if you look at the macroeconomics that surround EV. Gas prices go up, and the cost of ownership goes up. EV makes sense.”

He added that besides electric cars themselves, there is a huge amount of opportunity developing the infrastructure for EV charging stations. “We are well-positioned for that,” said Paik.

He noted that ITT was the first company to develop a 75-amp rated interconnect solution to the SAE J1772 standard for EVs. 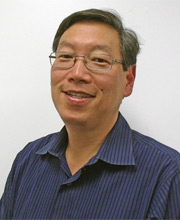 “We have a strong position in electric vehicles. There is a lot of opportunity,” said Russell Paik, worldwide director of product management for ITT Interconnect Solutions.“We are now in the process of launching our second generation solution covering all of the three worldwide standards,” said Paik.

In some cases, the move to more environmentally friendly and energy-efficient equipment is having positive impact on business of some electronic product suppliers. Case in point: Orion Fans, a subsidiary of Knight Electronics, based in Dallas, Texas.

“We are seeing a shift towards more green products. When OEMs do that, they generally buy a new fan rack and a new enclosure,” said John Knight, vice president, vice president and general manager for Knight Electronics. “So our fan trays they are really taking off and doing very well.”

He added that the move to green often means OEMs looking for more energy-efficient smart fans such as the 6-inch AC fan Orion recently developed that reduces power consumption by 30 percent, achieved by increasing or decreasing fan speed according to air temperature.

Up to 25°C, the fan remains idle. Between 25 to 40°C the fan ramps up, hitting full speed at 40°C. By running when the temperatures hits a certain point and, the fan can operate at less power. 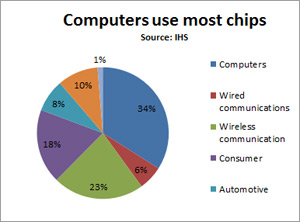 Computers consume the most semiconductors accounting for 34 percent of the chip market.Jim Lieb, vice president of sales for connector manufacturer Conec, based in Garner, N.C., said that demand is strong for high reliability products such as sealed d-subminiature connectors used in harsh environments in industrial and communications applications.

He added that demand is decent from medical equipment manufacturers and from defense contractors for commercial off the shelf connectors.

While most electronics companies may post modest growth in 2012, the companies that will likely do the best are the ones that have a broad range of products that are needed by traditional customer segments as well as new emerging ones.