Supercapacitors offer performance characteristics that are suited for energy-harvesting environments.


Energy-harvesting applications rely on small and irregular energy production from ambient sources, such as light, vibration or radio frequency, and typically require some form of energy storage to meet peak demand. Electrochemical double-layer capacitors (EDLC), or supercapacitors, offer performance characteristics that are suited for energy-harvesting environments. Engineers can select from a broad range of device characteristics and design systems that are able to scavenge power from ambient sources and meet peak power demands required in increasingly sophisticated devices and applications.

Although materials and manufacturing techniques vary, supercapacitors are fabricated from two current-collector substrates coated with porous material, such as carbon suspended in a liquid electrolyte or solid conductive polymer with a thin barrier between (Figure 1). An applied potential causes ions to collect on each collector, while the barrier prevents the charge from moving between them. No chemical reactions occur during energy storage or release, so these processes are reversible, yielding a device that can be charged and discharged for hundreds of thousands of cycles.

Figure 1: Although specific manufacturing methods and materials vary, a typical supercapacitor relies on the electrostatic potential between two collectors suspended in an electrolyte or polymer and separated by a barrier. (Source: Cornell Dubilier Electronics)

Using porous material on the electrodes results in a massive surface area for charge storage, while the charge separation formed across the electrode-electrolyte interface results in a charge separation of molecular dimensions. From basic physics, capacitance is ∞A/d, where A is the plate area and d is the area between the plates. Consequently, with the effective plate area measured in hundreds or thousands of square meters and a nanometer-level separation distance, supercapacitors offer significant specific energy, or capacity. This capacity is only beginning to approach that of batteries. However, supercapacitors offer greater specific power than batteries due to the relatively slow chemical reactions in a battery and because supercapacitors release energy quickly since discharge processes rely strictly on a supercapacitor’s physical characteristics (see Fig. 2). 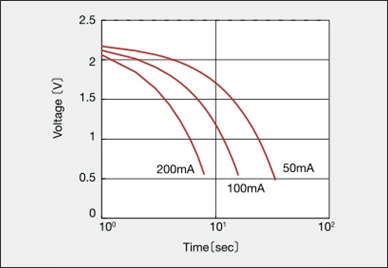 Although supercapacitors can eliminate the need for batteries, the power requirements of a certain application may demand a continuous low-power supply supplemented by peak power demand. For example, wireless sensor nodes require peak power for wireless communication bursts of data collected by sensors over time in low-power mode. In this type of application, supercapacitors are ideal complements to batteries. While the battery provides continuous power, the supercapacitor is available for pulse power demands.

In this paired configuration, supercapacitors extend battery life and reduce the size and cost of the required battery. Pairing supercapacitors with batteries also provides a solution to the cold-boot problem in applications such as energy harvesting. Here, systems face the problem of starting up with no stored energy available or not enough energy to allow the system to complete initialization and recover enough power from alternate energy sources to continue operating normally.

An energy-harvesting application using ambient light might face a similar challenge after coming out of a prolonged state with little or no light energy available. Enough power might be available to begin system boot, but there is not enough power to permit the system to complete startup and begin useful energy harvesting. In the past, a solution has involved using larger solar panels or ambient-energy transducers. Using a supercapacitor, an energy-harvesting design can boot into a mode where it first charges the supercapacitor to supply enough power to safely complete system initialization.

The extended life cycle of supercapacitors and their ability to store and quickly release relatively large amounts of energy make them particularly effective for energy-harvesting applications. Their electrical characteristics make them an ideal match for applications where energy efficiency is paramount. Supercapacitors offer very low leakage current and low equivalent series resistance (ESR) with excellent performance, even at higher frequencies (see Fig. 3), to help ensure that nearly all the energy trickling in from ambient sources remains available to power application circuitry. 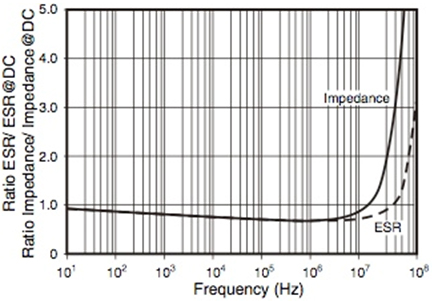 
Available with ESR as low as 0.16 mΩ and capacitance as high as 5,000 F, supercapacitors come in a broad range of packages as small as 3.8 mm in diameter. Although manufacturers also offer supercapacitors targeting power tool and automotive applications with higher voltage requirements, most device families are available at lower voltage ratings for energy-harvesting designs.

Similarly, engineers can find parts with high capacitance and low ESR from a variety of manufacturers. The M Series of supercapacitors from Eaton is available in capacitances ranging from 1.0 to 9.0 F with low ESR throughout the series. The 1.0 F M0810-2R5105-R offers an ESR of 200 mΩ at 1 kHz. Other manufacturers’ 1.0-F devices achieve ESR of the same order of magnitude. In the Elna America DZN Series, the 2.5-V 1.0-F DZN-2R5D105T features a 100-mΩ ESR at 1 kHz, while the 2.3-V 1.0-F PAS0815LR2R3105 from Taiyo Yuden’s LR series achieves a 70 mΩ ESR and uses a doped amorphous structure that can store more ions than conventional EDLC structures, according to the company. For its 2.7-V 3.0-F ESHSR-0003C0-002R7 UltraCap series device, NessCap cites a 61-mΩ ESR at 1 kHz with an 8-µA leakage current after 72 hours.

ESR typically drops as capacity increases, as shown by very large capacitance parts from EPCOS and United Chemi-Con. The EPCOS B49410A2115Q000 Ultracap offers 110 F at a mere 3-mΩ ESR at 1 kHz, while the United Chemi-Con DDLC2R5LGN351KA65S device in the company’s DLCAP series is a 350-F part with only 8-mΩ ESR.

The endurance of supercapacitors, including those mentioned above, is typically many years, but specs vary widely. While many parts are listed with endurance values of 10 years or more, this duration is typically listed at room temperature. Catalog and datasheet specs typically show supercapacitors with endurance of 1,000 hours at 70° or 80°C. Actual expected life cycle will double for each 10 degree reduction in operating temperature and extend proportionally with voltage derating below the rated voltage of each part. With careful packaging and heat management, engineers can expect a supercapacitor’s lifetime to surpass a decade.