Traditional RKE devices such as vehicle key fobs were designed simply to unlock the door and allow use of the metal key to start the engine. Later RKE systems added passive entry (PE) capability, integrating passive LF transponders in key fobs as part of the authorization process to unlock doors, unlock steering, and start the engine without the use of a metal key. With the availability of more highly integrated devices, manufacturers have continued to deliver RKE applications with greatly enhanced functionality that delivers broader convenience functionality and improved security in a growing number of RKE applications including vehicle access, building access, and others. 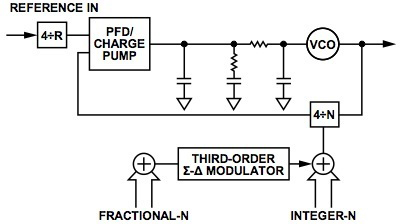 The use of fractional-N PLLs rather than more conventional integer-N PLLs offers greater variation with devices that can be tuned in firmware to different carrier frequencies. Compared to integer-N PLLs, fractional-N PLLs allow very fine step sizes with very high reference frequencies, delivering improved phase noise performance and rapid lock-in times -- all while providing greater flexibility in carrier frequency control. For example, the fractional-N PLL used in the Analog Devices ADF7020 allows the selection of any channel within 868 MHz to 956 MHz (and 433 MHz using divide-by-2) to a resolution of less than 300 Hz.

For most applications using a transceiver based on a fractional-N PLL, engineers would use as high a value of phase frequency detector (PFD) reference frequency as possible to obtain the best possible phase noise performance. Using the highest possible PFD also helps eliminate integer boundary spurs -- a type of spur inherent in fractional-N PLLs. Boundary spurs appear when the VCO/PLL is programmed to frequencies close to harmonic multiples of the PFD reference. At these frequencies, a portion of the nearest integer channel is coupled directly to the RF output. Engineers can reduce this effect by selecting crystal oscillator values that place the desired RF channel away from integer multiples of the PFD reference. Higher PFD frequencies create fewer of these integer channels in the desired band, thereby reducing opportunities for integer boundary spur.

Devices in this class provide engineers with a great deal of flexibility in tuning the devices to specific requirements. Analog's ADF7020 offers multiple programmable features, including receiver linearity, sensitivity, and IF bandwidth, permitting engineers to trade receiver sensitivity and selectivity for improved power consumption, for example. In this device, engineers can program transmitter output power in 0.3 dB steps from −16 dBm to +13 dBm. Furthermore, a simple three-wire interface is all that is needed to program transceiver RF frequency, channel spacing, and modulation. At the same time, these devices help reduce BOM costs. In the ADF7020, engineers can use an inexpensive quartz crystal, and correct for errors programmatically by adjusting the fractional-N value or using the device's automatic frequency control feature.

As with many of these devices, engineers can select multiple modulation techniques including FSK, ASK/OOK, GFSK, and more -- typically doing so just by setting bits in status registers. In the ADF7020, for example, engineers can implement FSK by setting the value for the center frequency, or implement ASK by toggling the on-chip digital-analog converter (DAC) between two values specified in registers.

Devices in this class typically incorporate a successive detection signal chain for determining received signal strength indicator (RSSI) values, which are used internally for ASK demodulation. Besides its use internally, RSSI is often brought out externally and transmitted to the base station for use in determining the relative position of the mobile unit -- much as LF transponders are used in PE/RKE key fobs in automotive access designs.

The Freescale MC33696 sub-GHz transceiver also employs fractional-N PLL and offers additional features for data exchange with a base station or other devices. The device features a strobe oscillator that periodically wakes up the receiver so the device's on-chip data manager can check for incoming messages. Here, the data manager can autonomously decode Manchester-encoded data internally acquired during receive mode -- saving power by eliminating the need to wake a host MCU for this basic task.

Engineers can activate RSSI by setting a bit in the MC33696. During operation, the device measures RSSI at both the LNA output (for input signals in the range -50 dBm to -20 dBm) and at the IF filter output (for signals below -50 dBm), and provides both analog output through an RSSIout pin and digital output through the RSSI register (Figure 2). For high-speed RSSI updates, the device relies on a discharge circuit to reset the measurement and allow detection of new peak values.

Figure 2: The Freescale MC33696 provides both analog RSSI and digital RSSI output across a dynamic range extended by sampling at two different points in the signal chain (Courtesy of Freescale Semiconductor). 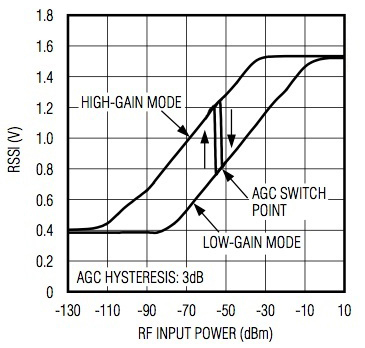 Besides their enhanced RSSI capabilities, Maxim's MAX703x devices employ a hybrid approach, utilizing fractional-N PLLs for transmit frequencies and integer-N PLLs to generate the local oscillator (LO) signal in the receiver stage. Besides eliminating the need for separate transmit and receive crystal reference oscillators, the use of the integer-N PLL helps reduce current drain in the receiver stage.