This article looks at STMicroelectronics EZ-Boards which aid in the design and prototyping of surface mount power devices.


Did you ever build a quick prototype of that nifty idea that has been rolling around in your head? Having the idea is great. Building it for the first time and getting it to work is close to nirvana for folks like me. That really was the fun part of inventing. Making it work.

In the earliest days of semiconductors, building a circuit meant that you had to actually make the transistor. I am glad those days are long gone. The semiconductor industry has seen a lot of change since John Bardeen, Walter Brattain and William Shockley built the first “Crystal Triode” in December 1947. We are building on the shoulders of great men. 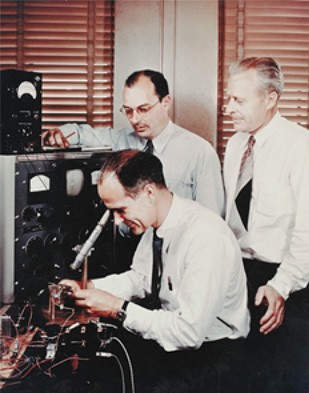 In more recent times, prototyping was a matter of pulling out your white board (or perf-board) and plugging in a quick circuit to verify what you were thinking would actually work. Simulations can really only take you so far. Some time ago, I had designed a simple alternator voltage regulator for a niche aftermarket application. I drew up the schematic, spent hours simulating it, optimizing it, and making it stable. I was proud of my little circuit. It was a simple discrete analog control loop driving a smart high-side driver. In those days, power switches were relatively big leaded components with a tab you could snap a small heatsink onto, or bolt on a big heatsink when needed. The protected high-side switch I used was a VN820 in a 5 leaded TO-220 package.

I built my little invention and verified that it would perform as expected on the bench. That is, with artificial loads and power supplies, no alternator. The circuit provided a PWM duty cycle based on a narrow ~300 mV regulation voltage band around 13.5 V. Essentially, the higher the voltage was, the lower the duty cycle was, within that band. Below the band the duty cycle was 100%. Above the band the VN820 was off completely.

Confident that it should work well, I drove to Toledo where I had access to a big enough alternator test stand to run the new circuit through its paces in a controlled but more complete environment. Verifying an alternator voltage regulator in an alternator took quite a bit of power. The task is to spin an alternator from very low speeds to several thousand RPMs while pushing over 2 kW into resistive loads. Well, my results were not as expected. My little circuit was about as stable as a leaf in the wind. It took prototyping it and messing with the control loop for several hours to find the stability I was looking for.

Because the VN820 was a five-leaded TO-220, I could bend the leads and solder it down to a perf-board easily. Surprisingly, they still make this 13+ year old device. The newer smart switches, with many more features, do not come in those big through-hole packages. Smart high side switches today are a lot smarter and come in very small, surface-mount power packages that are half the size of my pinky nail. If I were to design my little alternator regulator circuit today, I would be stuck with the 13 year old technology if I wanted to do any quick prototyping. These new smart switches cannot be “bent” to solder down to a perf-board.

Let us take a few moments to talk about the pin pitch. In electronics, small is great. We all want to save space. However, attempting to solder one of these down is enough to drive one bonkers. The older I get the finer the pin pitch gets and the worse my eyes are at seeing these little guys. We have a microscope that I use to verify that I have not shorted pins together with a solder bridge. My simple method of soldering one of these guys onto a circuit board: Solder the part down, look in the microscope, resolder, look in the microscope, and repeat until no solder bridges can be seen. Hope that there are no solder bridges from pin to pad that I can’t see. Get my point?

There is no just soldering one of these new high side drivers onto a perf-board, snapping on a clip-on heatsink and driving a real load. Instead of a tab they have on their underbelly an exposed pad for conducting heat into the circuit board. This little pad is all that is left of that nice big tab we could snap a heatsink onto. Sometimes the tab was enough of a fin to dissipate what heat the circuit would generate.

You might be able to circumvent this grief with a socket. If you could find one, let alone one at a reasonable price, there is still no ability to get the heat out of the part. Without directly mounting it to a printed circuit board (PCB), the smart switch has no effective heatsinking.

What it comes down to is that if you wanted to prototype with one of these, you need to spin a PCB. That takes time, effort, and money. That thought can make the nifty idea you had not look so nifty anymore. We really do not want to spend the money and effort to spin a board until we have a better understanding if it is actually going to work. As a result there will be those ideas that are left by the wayside because the cost of just figuring out if it makes sense was too high. 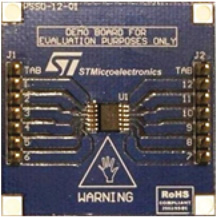 The EZ-Board evaluation board concept allows you to bring that nifty idea into reality with minimal time, effort, energy, or money. The board itself consists of a single device mounted on a simple two sided FR4 circuit board. There are thermal vias under the part that bring the heat to the bottom side of the circuit board providing ample thermal conductivity to handle most any application. Each pin is individually pinned out giving the inventor complete flexibility to construct his/her own application circuit with no limitations. With this concept we are back to being able to build that quick prototype to see if that control circuit is as stable as the simulations (may falsely) predict. 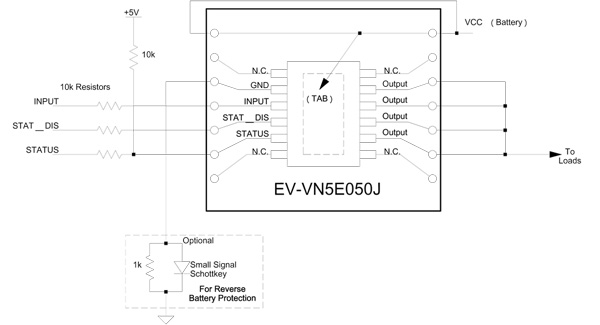 An EZ-Board is simply a single device mounted on a board. There are none of the recommended components that still need to be placed around the device depending on the environment. For instance, if reverse battery is a real possibility then the blocking diode and resistor in the ground leg is important to you. In addition, you may be able to live with variable voltage drop across the ground protection to not need the diode. Then your resistor value would be a bit smaller. Other components like bypass capacitors or I/O resistors are also not on these boards.

What all these components are and why they are needed can be found in ST’s M05 design guide UM1556. This extensive application note provides a great amount of detail on safely designing with ST’s M05 high side drivers. It is a valuable tool in any designer’s toolbox.

For a small cost, anyone can buy one of these boards and plug it into their system and watch it play. Choose from any of seventeen different smart, high-side driver EZ boards from single output 16 mOhm drivers to quad output 160 mOhm drivers. Some are designed for 12 V automotive applications and others that work well up to 36 V. All of the IC’s are automotive grade components. That means ST has designed and tested them to survive in one of the strictest and most demanding environments in the industry. We are adding to the corral of EZ-Boards as they become available.

A short tutorial on the part number decoding

Many IC part numbers are completely disconnected from their functionality. MOSFETs have some hope in determining what it is you have in that you can find voltage breakdown and some hint of current capability (while mounted to a 25°C infinite heatsink). The VIPower™ high side drivers on these boards have a clear part-numbering scheme. Let us take the VND5E025AK-E as an example. We can break down the number into several parts starting with “VN”.

VN is the process family. This is a vertical process much like a discrete MOSFET with some added masks to create some simple control circuitry. V comes from the process name, VIPower or Vertical Integrated Power. N is for N-Channel.

The “D” is for dual. In this case, the driver has two outputs. For single outputs, there is no letter. For quad output devices, you guessed it, there is a “Q”.

The next three numbers represent the on resistance of the output switches at 25?C. In this case, the “025” means the outputs are 25 mOhm switches.

“A” stands for analog current feedback. A current feedback is essentially a small portion of the output current being fed back so that the user can use a reasonable size sense resistor to determine what the output current is. No ”A” means the device has a digital, on/off fault pin. This pin is an open drain configuration where it would pull low when the device is faulted.

Then there is the letter “K”. This letter tells us what the package is. Of all the packages we have for our high side drivers we have the following letter designators:

Lastly, the “–E” this stands for Eco-pack. The devices with “-E” are all RoHS compliant.

So the VND5E025AK-E is a 5th generation enhanced VIPower device with two 25 mOhm outputs in a PSSO24 package providing an analog current sense feedback.

The great news is that you can find all of ST’s smart high side driver EZ-Boards right here at Hotenda. Check one out today!