This article will provide a brief overview of the major standards in the automation field and look at some of the microcontrollers available to implement them.


Automation has long used different forms of data communication as a way to improve the depth of control and the quality of information for the system operator. The different forms have evolved over time, resulting in a plethora of standards, both those developed specifically for automation and others developed elsewhere that have been adopted for automation.

This article will provide a brief overview of the major standards in the field and look at some of the microcontrollers available to implement them, including Atmel’s ATMega128 family with ZigBee and Texas Instruments’ industrial spec TI MSP430BT5190IZQWR for Bluetooth. It will also look at offerings for the mainstream CAN controllers, such as TI’s RM48L952, Silicon Labs’ C8051F58x/59x, Freescale’s MCF51AC256 and Microchip’s PIC32MX57 families.

To make it easier to compare the different approaches, the ISO (International Standards Organization) created the OSI (Open Systems Interconnection) Reference Model. The seven layers of the model (see Figure 1) are an attempt to clarify the different functions that data communications needs, starting from level 1, the physical layer, defining the wires, connectors and the way in which signals travel across the wires (or optical fibers or radio waves.) The layers become increasingly abstract until layer 7, the application layer, which looks at the interface between the network and the communication software. Of course, reality is messier than models and, for example, the familiar TCP/IP protocol crosses multiple layer boundaries. One particular value in the layer approach, however, is that it makes clear that it is possible to separate the way in which different pieces of equipment talk to each other from the physical mechanism that connects them. TCP/IP, for example, now normally runs over Ethernet. 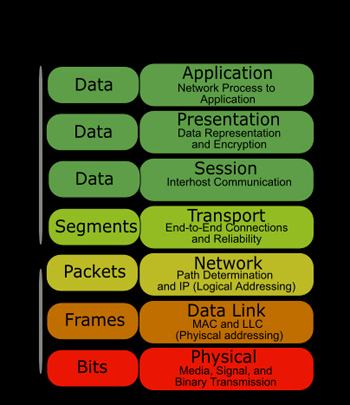 An analogy might be freight containers. The content of the containers varies almost infinitely; the container itself is one of a small number of standard sizes and it can be carried in large quantities on a ship, smaller quantities on a train and single containers can ride on the back of a truck. In comparison, the content of messages varies almost infinitely, messages can be packaged into a different number of formats and they can travel over copper wires, optical fibers, radio waves, or even infrared light.

A typical automation system will be hierarchical with the actual machine carrying out a task at the lowest level. It has sensors, switches, perhaps display lights and possibly a manual override. Above this is the local control intelligence: this will communicate with other local controllers and with some supervisor device, which in turn communicates with a Human Machine Interface (HMI).

The communication for the sensors and switches tends to be fairly simple - classically using UARTs and RS232, although there is some movement towards giving the devices their own IP address and using an Ethernet network even at this low level. Higher-level communication is often through LIN technology. Originally devised for use in vehicles, LIN, the Local Interconnect Network, uses a master node with multiple slaves. Each slave communicates only with the master, either receiving instructions or sending information. LIN slaves are normally separate devices, connecting, for example, to a sensor, although the slave mode may be an option with some microcontrollers. Other options that are being deployed, although in a limited way, include the ZigBee and Bluetooth wireless communications technologies – these are discussed later.

When the signals from the sensors are variable, such as temperature or pressure measurements, the sensor might undertake analog to digital conversion, conversion might be through a dedicated device or, increasingly, microcontrollers are including on-board analog circuits.

The communication between different controllers and between a controller and the HMI, normally uses the higher-level protocols, like MODBYS, PROFIBUS, CAN, and others.

The transmission medium is increasingly Ethernet over wires. However, Ethernet running on wireless LANs (IEEE 802.11x) is also becoming used and other wireless standards, such as ZigBee (IEEE 802.15.4) and its relatives and Bluetooth (IEEE 802.15.1) have a role to play.

The different protocols work in different ways. MODBUS, originally defined by specialist PLC (Programmable Logic Controller) company Modicon in 1979, is an open standard that exists in a variety of formats. Originally implemented over simple serial links, it is now more usually deployed over Ethernet. It is normally implemented as a master-slave configuration, with each slave having a unique address. PROFIBUS was developed in Germany and is a closed standard. It is designed to work in both factory automation and process control and is very widely deployed. Both MODBUS and PROFIBUS normally use dedicated transceivers linked to microcontrollers. 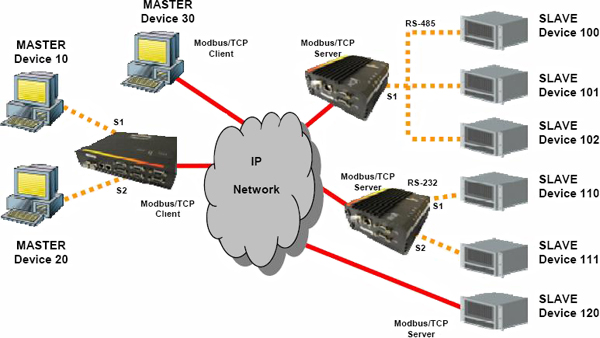 CAN is another automotive standard that has been adopted by automation and is widely used. With CAN, each node is capable of communicating with other nodes on the network. Although when the standard was first promulgated there were dedicated CAN devices, CAN controllers are normally part of the interfacing options for any microcontroller aimed at industrial and automotive applications.

TCP/IP, the common protocol to run over Ethernet for LANS (Local Area Networks) or Wi-Fi for WLANS (Wireless LANS) relies on each node having its own, unique IP address, and communication is between specific addresses. Virtually every microcontroller today will have one or more Ethernet interconnections and will run a TCP/IP software stack to manage communications.

ZigBee was designed as a low power, low-cost networking technology, using wireless connectivity to create a mesh network. ZigBee networks are normally used for simple traffic with the nodes expecting to be in sleep mode until woken to receive a message. There are different flavors of ZigBee, but in general, a specialist ZigBee chip with built in RF capability is normally used to connect to a microcontroller. However, there are some specialist microcontrollers with a ZigBee capability, such as Atmel’s ATMega128 family. This is an 8-bit RISC CPU with an on-chip, low-power 2.4 GHz transceiver. Bluetooth is another wireless communication technology. Originally designed to replace RS232 cables, it has evolved into a more general short-range technology. It uses a master-slave approach, where a master can control up to seven slaves, though normally there are fewer in an ad-hoc network. Bluetooth’s penetration into the industrial market has not been as great as had been predicted, and although there are microcontrollers with Bluetooth capability, they are not normally specified for industrial temperatures. However, the TI MSP430BT5190IZQWR is usable in industrial applications.

Microcontrollers developed for automation applications normally include significant communications facilities. TI has developed the Hercules family of microcontrollers for a wide range of safety-critical applications, and within the family, the RM48L952 is specifically created for automation applications. It has dual ARM Cortex-R4F cores operating in lock step, where each processor executes the program and at each cycle, they compare their status. This is designed to allow the device to be part of systems certified to 61508 SIL 3. It has three CAN controllers, a LIN controller and Ethernet as well as a range of other communication interfaces. It is supported by a range of Real Time Operating Systems, and development tools include a development board carrying a CAN interface. 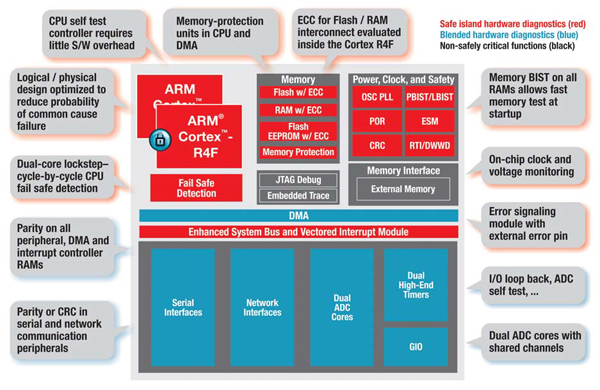 Silicon Labs has a different approach with its 8051-based parts, the C8051F58x/59x families. The venerable 8-bit architecture, with its vast amount of support, is coupled with both analog/mixed signal circuits for better communication with sensors, a wide range of interfacing, including CAN and LIN (both master and slave) as well as the usual range of development support tools including a development board. One of Freescale’s entries to this market is the MCF51AC256 family. This is, in turn, part of their Flexis range of low-end 32-bit controllers, designed and priced to compete with 8-bit and 16-bit devices. It includes the usual full range of interfacing options, with CAN, and supported by development boards and the Code Warrior development environment. 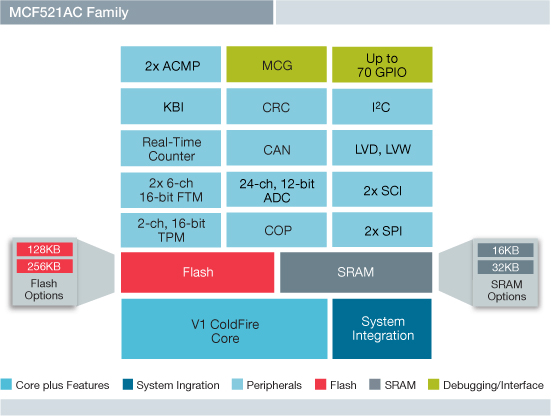 
Microchip has a long history of connectivity in the automation sector, with microcontroller offerings at 8-, 16- and 32-bit levels, as well as dedicated transceivers and a full range of development software and hardware. An example is the PIC32MX575F256L-80V/BG. This uses a MIPS 32-bit core and as well as the usual wide range of interfaces it has an extended temperature range (-40 to +105°C) for demanding environments.

The problem with choosing communications for automation is a problem of too much choice; there is a wide variety of protocols and for each protocol almost as wide a variety of products for interfacing and control. Like all such problems, a systematic analysis of the requirements will go a long way to restricting the initial choices. It should then be possible to match devices to requirements and budgets.