The good news is that even if demand rises there, will be no allocations. 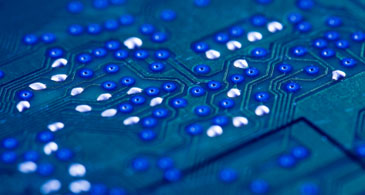 Buyers can expect stable pricing for standard logic through the rest of the year, but leadtimes could stretch as demand picks up in the third quarter.

Researcher IHS forecasts that standard logic leadtimes will stretch to 20 weeks in the next quarter as demand picks up. Leadtimes bottomed out at the beginning of this year to an average of fourteen weeks as supply and demand were in balance, according to IHS.

“Logic suppliers have been very hesitant to rush to bring capacity back on line", so leadtimes are stretching, said Jordan Selburn. senior principal analyst for IHS.

In fact, leadtimes can be quite “elastic”, noted Kristopher Keuser, director of marketing for logic at NXP Semiconductors.

Leadtimes range from four to twelve weeks for most of NXP logic products. However, some products in certain packages have longer leadtimes. For instance, leadtimes are longer for logic in SOT353 packages, according to Keuser.

“Leadtimes for SOT353 are quite extended, and I am told we are longer than our competitors,” said Keuser. “Our capacity has never dropped on that package. We have been in inundated with new orders from existing customers and from new customers,” he said.

Keuser noted that when leadtimes are less than eight weeks, it means a manufacturer has "good supply capability" and probably a lot of inventory on the shelf.

When leadtimes are more than eight weeks, it means the manufacturer does not have excess capacity, but there is no allocation of parts either. “When leadtimes are about twelve weeks, the market is getting tight,” Keuser added. 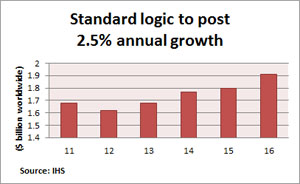 The global standard logic market will grow 2.5 % per year through 2016 when revenue will total $1.9 billion.Keuser said if there is an increase in orders in the third quarter, leadtimes could stretch because of the amount of inventory in the supply chain.

“If there is a slight uptick in demand, leadtimes may go out a couple weeks but we don't expect any allocations,” he added. However, a quick upturn in demand could trigger panic buying.

“If one or two major distributors places of quarter’s worth of orders within two or three days and other distributors do the same, leadtimes would stretch, " Keuser said.

“Since the second half of last year, we have seen normal lead times,” said Alberto DeMarco, general manager for logic at STMicroelectronics’s IMS/AMS - Analog Division. He noted that normal leadtimes for ST logic are six to eight weeks.

“Everyone in the industry is speculating what's going to happen in the second half of this year and next year," said DeMarco. "With the visibility that I have, we might expect some stretching of leadtimes sometime next year." 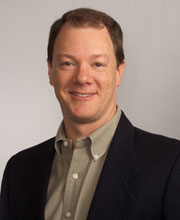 “If there is a slight uptick in demand, leadtimes may go out a couple weeks, but we don't expect any allocations,” said Kristopher Keuser, director of marketing for logic at NXP Semiconductors.If leadtimes increase this year, buyers can expect prices to rise, according to Selburn. “This quarter we are starting to see leadtimes creep up again," he said. IHS forecasts prices will increase 0.3 percent in the second quarter and 0.8 percent in the third.

Suppliers would welcome price increases, but report that prices have declined since last year and are not sure if that will change much this year.

“Price pressure has been there ever since the second half of last year,” said DeMarco. “I think we’re bottoming out on that, and I expect prices heading towards healthier numbers at the end of next year.”

If prices do rise, it is unclear how long the price increases would last because there is “always pressure to reduce pricing,” said Keuser.

“There are times that pricing does increase, especially in the commoditized section of our portfolio," said Keuser. “I still have not met the customer that looks forward to a price increase.”

Keuser added that NXP tries to avoid big swings in prices. “We try not to go too low in difficult markets and we try not to go too high in supplier markets," he said. "We do our best to maintain our customer relationships with the understanding that things change all the time."

However, the average price for standard logic has been flat overall over the past eight or nine years, according to Keuser.

The overall average selling price for the industry since about 2003 “has hovered around eight cents, maybe a little higher or little lower," he said.

"It doesn't mean that the whole portfolio is stagnant,” Keuser added. “We are still lowering prices on certain growth areas and raising prices on legacy parts. Our competitors are doing the same.” 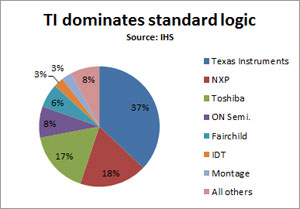 During that period, wireless communications will be a big driver of standard logic demand.

“Wireless is a big area of growth, especially as we see the 4G infrastructure rolling,” said Selburn. “Automotive and industrial also tend to consume a fair amount of standard logic parts."

He added that desktop and laptop computers use a lot of logic. “It tends to be more basic logic, but you will see things like SOT package logic, what we call ‘Little Logic’.

You'll find quite a bit of single gate logic inside laptops and desktops,” said Mather.

He noted there is still worldwide demand for logic for industrial and communications equipment. “Customers use various types of logic in those applications. We will still see some amount of logic in almost every application that comes out,” said Mather. 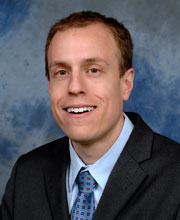 “Logic has been around for a very long time. It is a category that has survived,” said Matt Mather, general Manager for standard linear and logic for Texas Instruments. Automotive will be a growing customer segment for standard logic, according to Keuser of NXP. “Automotive automotive has stable growth. It's never explosive, but it is a good business to be in."

Even if the number of cars ship stays the same, "we will see our numbers go up because of the increased electronics content in vehicles,” he said.

Because of automotive wireless computers, there will continue to be modest growth for standard logic for years, although many in the semiconductor industry have said standard logic would eventually be integrated into other chips.

“Logic has been around for a very long time," said Mather. "We are still running devices from the 1960s, as well as all the devices we've created since then. It is a category that has survived."

He noted that with systems that use a processor, there are multiple components that need “some kind of logic to make it all connect.”

Mather said while logic is a mature product, there are several key trends.

One is the movement to lower voltage logic.

“Several years ago, 5 V logic was dominant. Now you see more companies moving to 3.3 V,” said Mather. “As the voltage trend continues, the need for power efficiency continues and 1.8 V logic will become even more prevalent.”

“That is a trend you'll see across, whether it is Little Logic or some multiple gate logic. You’ll continue to see that push towards lower and lower voltages,” according to Mather.

He added that another key trend is the movement to smaller and smaller packages. As applications and boards get smaller "customers want the very smallest logic device.

He said that TI offers devices in a six-pin micro-QFN package which measures about 1 x 1 mm square. “You get to a point where it becomes very compelling for customers.”