Stadiums are utilizing LED lights because they offer benefits like longer light emission, more uniform lighting, and a wider variety of lighting options.

The improved capabilities of LEDs, coupled with lower cost, are opening up big opportunities in outdoor lighting, particularly for stadium lighting. In these applications LEDs can provide brighter and more uniform light as well as more lighting options compared to traditional light sources. The three big factors for adoption are energy savings, lower maintenance costs, and lighting aesthetics.

Two of the biggest drivers for adoption of outdoor LED lighting are sports events and live concerts. “We’re kind of at the tipping point where some of the enabling technology on the LED side is only about a year or two old so you’re just now starting to see the major players starting to adopt it,” said Paul Scheidt, leader of product marketing, LED Components, Cree Inc.

However, the benefits are not just on the lighting side, including energy savings and lower maintenance costs.  LEDs deliver better lighting for broadcast TV, improving the watching experience on high-definition TVs, and providing better special effects such as slow-motion camera replays.

In addition to the broadcasting requirements, stadiums also are re-evaluating LEDs as a light source due to reliability concerns, said Ray Chock, senior director of business development at Lumileds. “When the lights went out at the 2012 Super Bowl for about 30 or 40 minutes stadium officials not only worried about a delay at one of the largest sporting events, but also the potential liabilities when lights are off for that long. Typically, traditional light sources need to cool off before you can restart them, unlike LEDs,” added Chock.

LED manufacturers are already geared up to meet the high-intensity light requirements of stadiums. Here are a few examples of LEDs that can be used in these applications.

Cree’s XLamp XP-L and XLamp MK-R LEDs are both being used in stadium lighting. The Cree XLamp XP-L high density, introduced last year, achieved a breakthrough efficacy of up to 200 lumens per watt at 350 mA, delivering up to 1226 lumens in a 3.45 mm x 3.45 mm package. It offers a 50 percent increase in performance compared to the XLamp XP-G LEDs. Characterized and binned at 1050 mA, 85°C, the XP-L LED is available with CRIs up to 90 and color temperatures ranging from 2700 K to 8300 K. 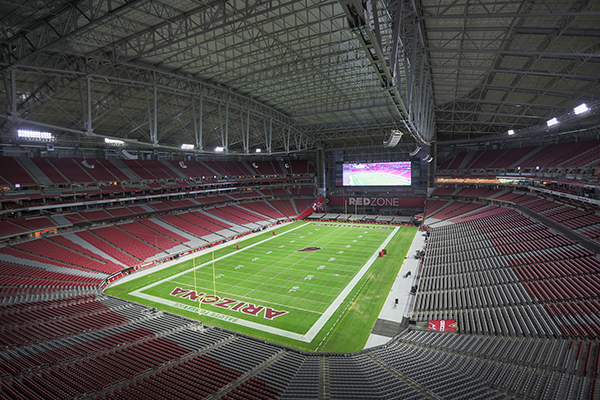 Cree recently launched the XLamp Extreme High-Power (XHP) LEDs, which target the replacement of the MK-R for larger arrays.  The XHP50 and XHP70 LEDs provide twice the lumen output and improved reliability compared to previous LEDs of the same size.

These devices reduce the size and cost of lighting system designs by using fewer LEDs to achieve the same brightness. This also means fewer optics, a smaller PCB, and a smaller housing. The XHP LEDs also achieve longer lifetimes even at higher operating temperatures and currents than previous LED technology, allowing lighting manufacturers to reduce heatsink size and cost without impacting the rated lifetime, said Cree. They can be used in stadium as well as track and high-bay lighting.

There are always going to be trade-offs between the different LED products available in the market. The LED selection will be based on the application and what the light source needs to do. For example, while Cree’s XP-L and XPH70 achieve about the same performance, there is a trade-off in terms of lumens per LED and its effect on optical design. The optics for the XPH70 needs to be larger than the XP-L, but it provides more lumens so it needs less total optics.

A stadium-lighting application is one that requires very-high intensity. These lights have to throw a narrow high-intensity beam of light at a far distance. The three key things that you need to achieve high-intensity light, said Scheidt, are a small optical-source size, high-light output (lumens), and an efficient optic design, which eliminates the need for diffusion or mixing.

However, Cree appears to have solved this challenge with the newest single-die XLamp XP-L High Intensity (XP-L HI) LEDs with a small optical-source size. (Editor’s Note:  The new XP-L HI LEDs are expected to be available at Hotenda as you read this.)

Here are the stats: The XP-L HI is touted as the first single-die LED to deliver more than 100,000 candela with a 50 mm diameter optic at 10 watts (Figure 2). Based on Cree’s SC5 Technology Platform, it more than doubles the candelas of the previous single-die XP-L LED through the same optic. It also features Cree’s new primary optic design that reduces optical source size by more than 50 percent to deliver candela at 185 lumens per watt at one watt. The LED is available in up to 90 CRI and color temperatures ranging from 2700 K to 8300 K, and 6,000 hours of LM-80 long-term testing data is available for the XP-L High-Intensity LED for lighting manufacturers seeking ENERGY STAR qualification. It also leverages the existing 3.45 mm x 3.45 mm XP-L package. 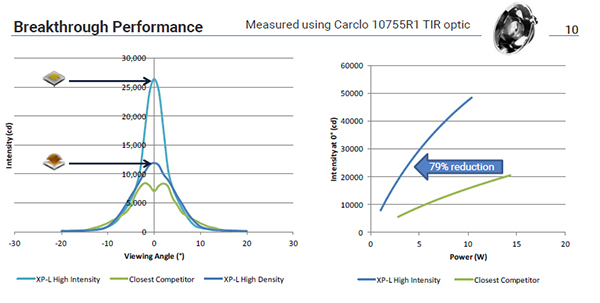 Figure 2: The Cree XLamp XP-L High Intensity is the first single-die LED to deliver more than 100,000 candela with a 50 mm diameter optic at 10 watts, and delivers candela at 185 lumens per watt at one watt. (Courtesy of Cree)

To light a stadium the lighting designer will want more intensity coming straight out of the optic, straight down to the ball field, for example. “It’s not just about the lumens but how you can control these lumens and turn them into candelas,” said Scheidt.

This is where the trade-offs come into play in terms of the size of the die. A larger die offers more lumens but the maximum candela achieved is a little less and it takes more power, said Scheidt. The candela per watt is how efficient the LED is in turning electricity into intensity. That is where you see the advantage to using the smaller source versus a larger one. Cree’s approach is to use a single-die package that makes it much easier and more efficient to put optics on top of it, which should improve cost.

The goal is to reduce system size, power, and cost and the XP-L HI delivers 120 percent more candela than the XP-L high density through secondary optics. It also achieves a 79 percent reduction in power, while achieving the same level of candela, compared to the closest competitor, according to the company.

“This is going to be a major breakthrough in enabling stadium lighting,” said Scheidt. “The candela is what matters when you have to throw a lot of light not lumens. If you can reduce by the amount of four times the power to get light out to centerfield or the middle of a football field, that is a pretty significant savings on heatsinks, drivers, metal, and all items needed for stadium lighting.”

In addition, the source size of the XP-L HI is about the same size as the existing XP-G2 LED, which means it has very good optical compatibility for a big ecosystem of optics that are already available for the XP-G2.

Similarly, Philips Lumileds continues to develop a range of products that meet specific applications like stadium applications. There are three elements of the light that are needed to produce a high-quality fixture for stadium lighting – high lumens per emitter, high efficiency, and color temperature, said Chock.

Lumileds produces products in the 140- to 160-lumens-per-watt range at its rated drive current, which can be used to create a fixture with 100, 110, and 120 lumens-per-watt fixture efficiency. This is at least half or more energy savings versus traditional lighting due to the high efficiency, said Chock.

The LUXEON M, for example, also offers a variety of CCT and CRI options, including products at 90 CRI in the 5700K range, which is specialized for outdoor area and stadium applications (Figure 3). 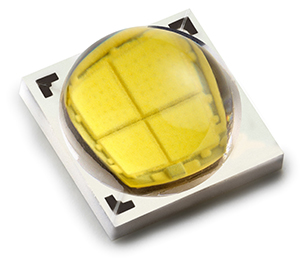 Lumileds also offers an undomed version of the LUXEON M. The LUXEON MZ offers a small source size; it’s about 50 percent smaller than the big brother M. This translates into higher candela hand-in-hand with better beam control so it can throw the light in a very tight beam across the stadium. They offer 900 to 1000 lumens per emitter, which is about 10 to 15 percent below the LUXEON M.

In addition to the LUXEON M and MZ, another Lumileds flagship product, the LUXEON TX, available in the 300 lumen range, can be used for stadium applications. “But for 100,000 or 120,000 lumen stadium lighting, the size requirements are bigger and you’ll need about four times more LEDs than the LUXEON M,” said Chock.

“Some may argue that the LUXEON TX thermally is a better system because the heat is spread out over a larger area versus the LUXEON M,” said Chock. “If you have a very good thermal design, the LUXEON M should be more than adequate to optimize system design and thermal densities.

Although not currently being used for stadium lighting, Chock said its chip-on-board (COB) arrays are another good option because their increments of light are very high (up to 8,000 lumens) with very good lumen-per-watt characteristics.

The decision is in the hands of the luminaire designer. “Although there is a recommended product, there is a case to be made for different architectural approaches for some of these designs that may lead to a different LED choice. However, because Lumileds has such a broad portfolio we can offer customers many different options for the same applications,” said Chock.

“You can fit three Z LEDs in the place of one Rebel Color but you get more color in terms of watts of power from the Rebel Color than the Z,” said Chock.

There are trade-offs between the two, but again, specific applications, such as lighting a specific space or shooting a light across the stage, will dictate the selection.

In summary, stadium lighting is just opening up to the LED industry and is a fairly new area for LED manufacturers. However, many of them are developing products for specific applications, like stadium lighting, that requires high-intensity light. They also meet the requirements of stadium owners for energy savings and lower maintenance costs, while adding more excitement to the event and better home viewing with improved lighting.