Renewable energy can be an expensive endeavor and photovoltaic systems are no exception. Ground and roof-mount frames have to be tough enough to handle weather extremes and conditions, and can be very costly even without tracking.


Renewable energy can be an expensive endeavor and photovoltaic systems are no exception. Ground and roof-mount frames have to be tough enough to handle weather extremes and conditions, and can be very costly even without tracking.

If you use storage batteries, there are large initial expense and the replacement costs every so many years to be considered. On the positive side, 90 percent of the materials in a lead acid battery are completely recyclable. Chargers and inverters are not cheap either.

The panels are the biggest expense. Fortunately, with higher manufacturing capacities coming on line, photovoltaic panel pricing is starting to come down, but not yet to the level of mass deployment.

In 2008, the price of $1000/kg of silicon kept panels at process of three to four dollars per watt. Combining the increase in silicon production capacity with the global slowdown has dropped the price to the $40/kg level meaning we may soon really be at the coveted one dollar per watt price point that many say will make photovoltaic solar on a level playing field with non-renewable energy technologies. We are presently around $1.50 per watt.

To get to that level of high deployment, payback has to be quicker. The lower cost promise of solar panels is one factor for quicker return on investment. The other is the changed architecture of photovoltaic systems stemming from the use of micro inverters.

Either way, the market for the electronics that make use of the solar energy more efficiently is about to explode.

Micro inverters are changing the landscape of renewable energy systems. With a grid tied panel, you can deliver energy to a smart grid and more easily become an energy producer as well as a user.

The greatest attraction to a grid tied panel is that you no longer need to buy, maintain, and use storage battery banks and inverters. Instead, the energy goes right into the grid.

On the downside, if you lose power, you will not have the backup capacity of the battery bank to keep your appliances powered, especially with the highly dynamics and non-consistent nature of sunshine.

With the promise of lowered utility bills with less invested costs, the green movement may have teeth. To accomplish this, electronic circuits capable of extracting as much usable energy as possible from a wide range of solar conditions are needed.

This means that the solar topology is changing. Isolation diodes are no longer the way to combine multiple panels (see Figure 1A), and every Joule of energy extracted improves your coefficients of performance. Now, each panel, or series of panels has its own power conditioning system that independently extracts energy as efficiently as possible in order to feed it to a micro inverter (see Figure 1B). 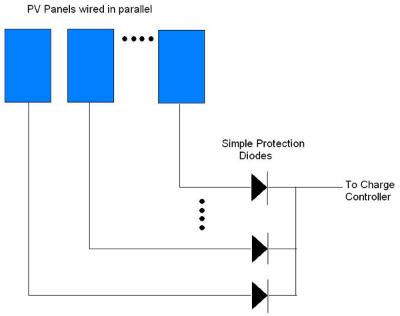 Figure 1A: The older simple yet effective technique of only using a protection diode to gang multiple solar panels is no longer effective. 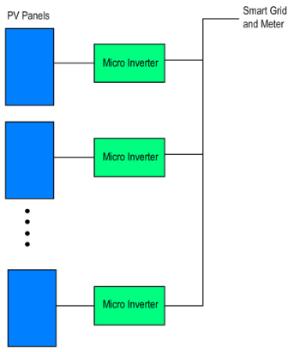 Figure 1B: When each panel or series of panels has its own micro inverter, each solar panel can deliver its maximum energy to the smart grid.

The only way to accomplish this is with switching power supply circuits that operate at high efficiencies for the range of conditions you expect to see from the solar panel or series of panels. As a result, it is a two-step process. The first is to extract the maximum amount of energy from the available solar cell to create an energy ‘pool’. That pool is used to create the grid tied inverter which shifts its phase angle to deliver power to the line.

This article discusses some switching regulator devices that can be used to efficiently extract power from a varying input voltage, such as a solar panel. All parts discussed here are available from the Hotenda website.

The switch is on

For the most part, three types of solar panels are available. These are polycrystalline (many crystals wired together), mono crystalline (a single cascaded crystal), or amorphous (silicon deposited on glass) (see Figure 2). While characteristics, efficiencies, and costs of these choices will vary, they are all just two terminal devices that produce a voltage and a current.

Figure 3: The voltage produced by a photovoltaic cell remains pretty much constant. It is the current that increases with light intensity.

Since solar arrays are made of individual panels that are put in series to get higher voltages and paralleled to get higher current, any capacity cell or system can be formed. Typically, you will see older panels with 12 volt, 18 volt, and 24 volt rated outputs. The current capacities can vary as well from under 100 mA to 20 A or more. This is quite a range.

Newer panels are now typically 48 V or higher. This can improve efficiencies a little since there are less line IIR power losses moving the power from the cell to the energy extractor. This can also lower the cost since the wires needed to connect the cell to the power conditioners can be thinner. This is less important with the use of micro inverters since they are usually in very close proximity to the solar cells.

Since there are varying solar conditions, from dusk and cloudy, to direct sun will change the solar panels output current (as will the incident angle of the sun and the temperature of the solar panel), it is important for the energy extractor to operate at good efficiencies over a wide range of conditions to provide usable power back to the grid, even when very little solar radiation is present. This is where switching regulators shine since linear and low dropout regulators waste too much power.

The amount of power you wish to handle will dictate the available choices for switching regulators. The input voltage limits as well as the output ranges will determine which parts are of interest.

Designed specifically for PV smart junction boxes, solar telecom power supplies, and the 42 volt emerging automotive systems, the SM72485 contains an internal 100 volt N-Channel buck regulator switch transistor. The output voltage is determined by two external programming resistors which feed a regulation comparator with an internal 2.875 volt reference. It uses a variable duty cycle which is inversely proportional to the input voltage and handles short circuit protections as well as thermal and over voltage.

This SM72485 is ideal for taking the energy from the solar cell and creating the mid-level energy pool that can either drive other circuits, or be used to drive a small micro inverter. The output voltage is adjustable from 2.5 volts or more, and the self contained regulator requires very few external components (see Figure 4). 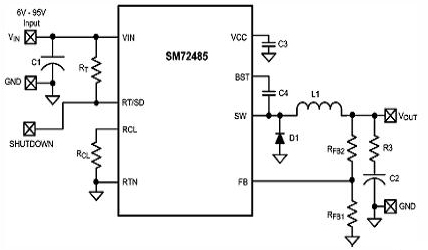 For 12 and 24 volt systems that will need to produce higher output currents, Linear Technology’s LT1270 high efficiency buck converter is a good choice. The input range of 3.5 to 30 volts doesn’t make it suitable for the 36 and 48 volt panels, but the less than eight ampere capacity is not bad for a single chip high efficiency converter. A ten ampere ‘A’ version exists, as well.

The LT1270 uses current mode switching techniques and switches at 60 KHz. It can operate in a buck, boost, or flyback configuration and the high current switch is integrated in the heat-sinkable TO-220-5 pin package. This makes it easy to use.

Another good part to fill your energy pool is the Linear Technology LT3957. With a slightly higher input voltage range of 3 to 40 volts, the LT3957 achieves a 95 percent efficiency rating at higher output current (see Figure 5). 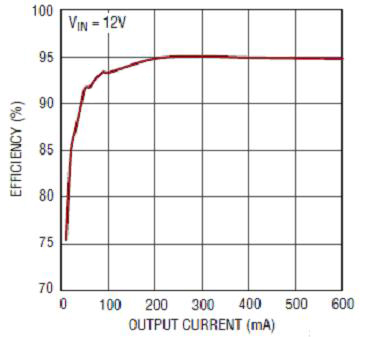 Switching frequencies can be set via external resistors from 100 KHz to 1 MHz. The LT3957 also has a synchronization pin that can help sync this part up with an external clock. An internal N-channel power MOSFET can handle up to 40 volts at 5 amperes providing a good amount of potential power to drive the micro inverter, device, or charger.

The STMicroelectronics L4970A is another high current part that could make a good energy extractor. This 10 ampere output capacity device generates up to 40 volt outputs using a zero to 90 percent switching duty cycle. Featuring an input and output sync pin, the L4970A uses an internal isolated DMOS power transistor mixed with CMOS and bipolar transistors to provide optimum performance.

Check out the data sheet on the Hotenda website to find a test and evaluation reference design that has only 30 mV of ripple at 10 ampere output while maintaining an 83 percent overall efficiency. Thermal protection disables the circuit when the junction temperature rises above 150 degrees Celsius and a hysteresis feature prevents unstable on/off oscillations that can occur. 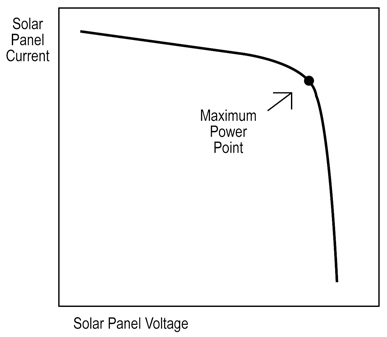 Figure 6: The maximum power point is where the current drawn keeps the voltage almost at peak levels. Any more and the output plummets.

This relatively new technology uses an algorithmic approach to sense the point of maximum power extraction and will control either a charge controller to deliver that power to a battery, or, create an energy pool that can be used by a micro inverter.

The MPPT is more than just a state machine and is typically implemented as a dedicated microcontroller-based system. NXP Semiconductors introduced the MPT612 MPPT IC. This is an ARM®-based processor that is designed to pull up to 98 percent of the energy from a solar panel according to NXP.

The MPT612 uses a patented algorithm which is implemented on the internal ARM7TDMI-STM RISC processor. Running at 70 MHz, it controls the external switching of a regulator for use as either a battery charger or a micro inverter. Fuel cell applications are also supported by this device.

The 32-bit pipeline processing unit has 32 Kbytes of on-chip Flash for firmware and 8 Kbytes of static RAM. The processor uses the standard 16-bit Thumb convention to reduce code and memory requirements.

The MPT612 draws 100 mA using the 1.8 volt core, with 3.3 volt I/Os that are 5 volt tolerant. This chip can only be used with the MPT612 software stack and an API. The context-based reference manual is also available from the company to help deploy and understand its use and operation.

National Semiconductor has an MPPT device called the SM72442MT. This is another SolarMagic class device which claims 99.5 percent efficiency according to National Semiconductor. It uses National’s own proprietary algorithm called Panel Mode which outputs four PWM gate drive signals to create a four switch buck-boost converter. The eight channel 12-bit A/D converters sample the voltage and current to provide a fast 1/100 of a second convergence time which allows the controller to maintain high efficiencies, even under changing solar conditions.

The STMicroelectronics SPV1020 also implements an MPPT. The SPV1020 combines the company’s Perturb and Observe MPPT algorithm and controller with a DC-DC boost converter to also achieve 98 percent efficiency at an operating voltage range from zero to 45 volts.

A nice feature is that the integrated SPV1020 incorporates a power MOSFET on-chip for active synchronous rectification. This reduces the external component count for the fixed frequency (100 KHz) PWM and varies the duty cycle from 5 to 90 percent with 0.2 percent increments. Like other components, over temperature and over voltage shutdowns are built-in. An SPI bus is used to allow the SPV1020 to communicate with a host controller which acts as a master.

STMicroelectronics provides an evaluation board called the STEVAL-ISV005V1 which can function as a demonstration board for a 300 watt panel. It implements three of the SPV1020s with 98 percent efficiency and is an effective tool to learn the four-phase interleaved technology used to optimize power going to an inverter.

More on the horizon

We are at the turning point where photovoltaic solar is reaching mass appeal. With tax incentives and rebates still available, solar is poised to make inroads into the renewable energy landscape we all desire.

Keep your mouse tuned to Hotenda’s website for updated information and product technology as it emerges.