For rapidly growing markets such as the Internet of Things (IoT), energy harvesting can significantly enhance battery life or even enable battery-free designs.

Energy harvesting offers tremendous benefits for applications able to take advantage of ambient-energy sources. Designers have employed energy-harvesting techniques to power applications ranging from motor and engine monitors to railway trackside electronics. Typically, these applications are based on wireless-sensor designs built to transmit sampled data about the environment or events of interest to a controller, aggregator, or other host (Figure 1).

Unlike other energy-harvesting applications, however, wearables and IoT devices share a need for designs that pack substantial functionality into the smallest possible package. Today, designers can take advantage of multiple options for reducing the footprint and overall size of these designs. For example, for a simple IoT localization application, a dynamic NFC/RFID tag, such as the STMicroelectronics M24LR16E could provide much of the required functionality in a package only 4.9 x 6.0 mm in size.

As with typical RFID tags, the M24LR16E powers itself by harvesting RF energy received from the RF reader, or vicinity coupling device (VCD). Unlike most RFID tags, however, the M24LR16E also features an energy-harvesting analog output that can be used to power additional devices such as an MCU. When placed in energy-harvesting mode, the M24LR16E-R outputs the excess energy coming from the RF field out to the Vout analog pin. Furthermore, designers can use the device’s ability to modulate the load on the received carrier to communicate with the VCD at rates up to 53 Kbps—eliminating the need for a separate wireless RF transceiver.

For many IoT applications and most designs targeting wearables, however, engineers need to rely on ambient-energy sources and on conventional wireless connectivity. For these designs, specialized ICs offer complete solutions for key subsystems, including energy harvesting, sensor-data acquisition, and wireless communications. Using highly integrated devices, engineers can shrink energy-harvesting designs with sophisticated functional capability into very compact systems solutions comprising only two or three ICs and a minimal complement of discrete passive components.

At the heart of these solutions, specialized energy-harvesting devices, such as the Linear Technology LTC3588-1 and Maxim Integrated MAX17710 integrate DC/DC converters, power management circuitry, control functionality, and more in ultra-thin low-profile packages only 3 mm x 3 mm in size. Designed to interface easily with MCUs, these devices require only a few external components to provide a complete energy-harvesting power supply for the MCU and other circuits (Figure 2). 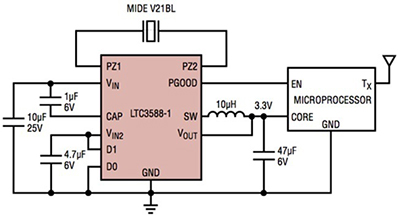 Designed to interface directly to a piezoelectric or other AC power source, the Linear LTC3588-1 combines a low-loss full-wave bridge rectifier with a high-efficiency buck converter. As a result, the device can rectify an AC-voltage waveform, store harvested energy on an external capacitor, and deliver a regulated output voltage. In contrast, the Maxim MAX17710 is designed with a boost-regulator controller to generate power from low-energy sources down to approximately 1 uW. The MAX17710 can also charge an energy storage cell from a source as low as 0.75 V, using an internal regulator to protect the cell from overcharging.

Along with a single-chip energy-harvesting power supply, designers can complete their wearable or IoT design with a range of devices that combine an MCU core with extensive on-chip functionality, including an analog-to-digital converter (ADC) for sensor-data collection. While integrated analog peripherals have become commonplace, a class of wireless MCUs distinguish themselves with on-chip integration of a full RF transceiver for wireless connectivity. Just as important, these devices boast ultra-low-power requirements while providing high-precision data conversion capabilities as well as sufficient TX power and RX sensitivity required for these applications. For example, devices such as the Silicon Laboratories Si1004 wireless MCU combines an 8051-compatible microcontroller core with on-chip flash memory, 10-bit 300 k samples/s ADC, dual comparators, and an on-chip RF transceiver capable of providing maximum transmit output power of +13 or +20 dBm—all in a 5 mm x 7 mm 42-pin LGA package.

As with many of these specialized low-power devices, the Si1004 features multiple low-power operating modes. Devices in the SiLabs Si10xx family feature active-mode power consumption of only 160 µA/MHz and 300 nA in sleep mode with internal RTC operation. Furthermore, the Si1004 includes an internal DC/DC switching boost converter that allows operation down to 0.9 V. Offering a programmable output voltage range of 1.8 to 3.3 V, the internal DC/DC converter can supply other devices in a system with up to 65 mW of regulated power or even up to 100 mW in some applications. This additional supply adds flexibility for interfacing to sensors and other circuits requiring higher supply voltages than available in some energy-harvesting applications.

Wireless MCUs such as the SiLabs Si1004 are designed to simplify connection to an antenna. In fact, the Si1004 can be used in a TX/RX direct-tie configuration without the use of a TX/RX switch (Figure 3). For applications requiring improved performance for dealing with conditions such as multipath fading, designers can take advantage of antenna diversity support integrated into the Si10xx wireless MCU’s on-chip EZRadioPRO® transceiver to improve wireless performance up to 10 dB. 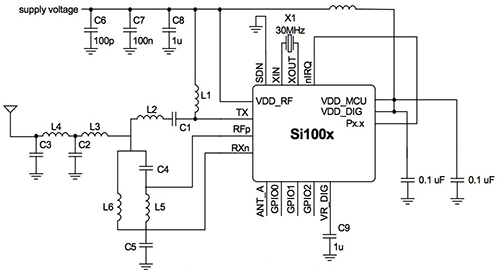 Other devices in this class provide highly sophisticated transceiver capabilities such as the Wi-Fi “Internet-on-a-chip” network processor integrated in the Texas Instruments SimpleLink CC3200. The CC3200 combines this network processor module with a high-performance ARM Cortex-M4 MCU in a compact 9 mm x 9 mm 64-pin device.

Higher performance cores means higher power requirements, but the CC3200 can operate on as little as 120 µA in low-power deep-sleep mode—the dominant state in typical wireless-sensor applications. Designers concerned about power consumption can also turn to wireless MCUs such as the Atmel ATSAMR21E18A, which is based on ARM’s most power-efficient core, the Cortex-M0+.

Wearables and IoT applications require compact designs able to provide sophisticated functionality with minimum power requirements. The availability of specialized energy-harvesting devices enables designers to power their designs from ambient energy without compromising the need for the smallest possible design footprint. Combined with low-power wireless MCUs, highly integrated energy-harvesting ICs allow engineers to squeeze complete wireless sensor designs into tiny systems able to deliver sophisticated functionality while drawing on power from ambient-energy sources. For more information on the parts discussed in this article, use the links provided to access product pages on the Hotenda website.