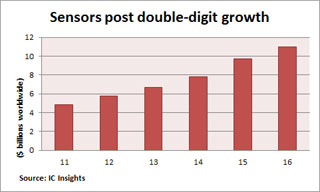 Demand for sensors is growing as more electronic systems are equipped with the ability to automatically control and protect themselves, understand movement, detect changes around them, and support new user interfaces, IC Insights reported.

Within the sensor market, accelerometers and gyroscope devices (acceleration and yaw sensors) continue to be the largest and fastest-growing. Revenue for those devices will post a compound annual growth rate (CAGR) of 20 percent, as revenue rises to $5.9 billion in 2016 from $2.4 billion in 2011, according to IC Insights.

Accelerometers and gyroscope devices, along with most pressure sensors, use micro electromechanical systems (MEMS) structures to measure and detect changes around them.

MEMS-based devices now account for about 70 percent of total sensor revenues compared to 54 percent in 2005.