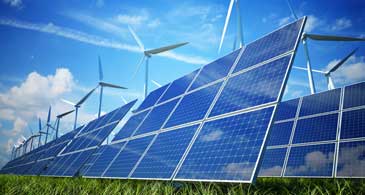 As a growing number of businesses and consumers look to harness the power of alternative energies, electrical and electronic component manufacturers are developing products that help maximize the total energy outputs of these high-efficiency solutions. Some manufacturers are focusing on aesthetics by making products with smaller footprints and others are weaving more advanced materials into their offerings.

On the solar side of the equation, Greg Sheppard, senior director of solar research at global research firm IHS in Englewood, Colorado, says at least some of the innovation is being driven by consumers that want to harvest energy during the day and then use those reserves to power their homes at night.

“That desire is pretty strong in Europe right now,” says Sheppard, “where the incentives for installing solar are in the process of winding down.”

Demand for alternative energy also has been steady in the United States, where the federal renewable electricity production tax credit (PTC)—a per-kilowatt-hour tax credit for electricity generated by qualified energy resources and sold by the taxpayer to an unrelated person during the taxable year—was renewed in January 2013 with the passing of the American Taxpayer Relief Act of 2012.

With technology moving at the speed of light, industry watchers say it just makes sense that solar and wind products are advancing along with it. Sheppard says innovation is taking place on the inverters or junction boxes that are installed on the back of every solar panel and used to convert from DC to AC power.

“We’re not only seeing more micro-inverters and optimizers used in this area,” says Sheppard, “but also more advanced components like gallium nitrite (GAM) and silicone carbide.”

Sheppard says the latter two components provide certain engineering advantages and, as a result, are finding their way into more applications.

Inverter miniaturization is another trend that’s unfolding in the alternative energy space, where homeowners are particularly wary of placing bulky, unsightly equipment on their properties.

“Right now, an inverter is basically a big box that hangs off the side of a house and manages the solar panels,” says Sheppard. “In residential applications we’re moving toward more distributed architecture, which includes a micro-inverter for every panel.”

Scott Franco, director of market development at Cornell Dubilier Electronics, Inc., in Liberty, S.C., says miniaturization is less of an issue on the commercial side of the market—particularly when it comes to the utility sector—where attaching large pieces of equipment to buildings is more common.

“Inverters for commercial utilities are giant cabinets that are filled with components,” says Franco. “There have been some efforts to make these products more compact and efficient, but that’s the general trend across all electronics categories.”

Looking ahead, Sheppard says he expects continued innovation in the components that are used in solar and wind applications, and says a healthy demand-supply balance within the industry should continue to drive demand for such products. The wind picture is equally as bright, with the American Wind Energy Association reporting a record additional 13.1GW of capacity during 2012, making wind the largest source of new power generation.

“We see the solar market continuing to average double-digit growth for the next five years,” says Sheppard.

“Market growth has been up and down over the last couple of years thanks to the presence (or lack of) government subsidies,” says Valletta, “but we see a very good outlook for the market going forward.”