Remote radio units (RRUs) are a mission-critical component of cellular telecommunication systems. Generally installed on towers, they are controlled by electronics inside a closed shelter situated on the ground near the tower. Solar energy is an ideal source of backup power for the RRU and for an entire tower’s associated electronics, including IT equipment that links the tower to enterprise servers.

Solar provides an excellent, low-cost backup energy source but it also poses some interesting engineering challenges. Tower electronics are expected to have long, uninterrupted duty cycles, for example, and they require high quality power in terms of frequency, voltage fluctuation and power factor.

Figure 1 shows two options for implementing a solar powered backup system for a cell tower. The photovoltaic segment of the system can be fairly conventional and is shown to the right with very little detail. From the design perspective, there are two key issues: monitoring the battery pack that stores power and selecting and designing a system to communicate the status of the battery stack to the local server.

Although the more highly integrated solution might seem to be the obvious choice, there are instances in which the two-chip solution can be superior. A design team might have MCU code that it wishes to re-use, for example, but the code cannot be easily ported to the MCU/RF chip. Power efficiency is another example. The radio function consumes the most energy and should be put into a low power mode whenever possible. But if the MCU is being shared by other applications – which is often the case – then it might be impractical to turn the SoC off and on frequently.

Because battery backup systems are connected in parallel with the telecom equipment, they are always online. Under normal conditions, commercial AC power supplies electrical energy to the telecom and server equipment as conditioned DC power. In its standby role, the battery system does not discharge DC energy but it does filter the rectifier output and maintains itself at a fully charged condition by consuming a very small amount of trickle charge DC current.

The batteries that comprise the storage system require continuous monitoring because it is important to have accurate information about a problem in order to diagnose and fix it properly. Lead-acid batteries are notably robust and may not require temperature monitoring, but checking the battery stack’s state of health in terms of voltage and potential is still necessary.

Most telecom backup power systems utilize lead-acid batteries, which are inexpensive and can operate well in extreme temperature conditions. Lead-acid systems are bulky, however, and have relatively low energy density (i.e. a very large battery may be required to achieve the desired run-time). Some installations today are “upgrading” to lithium-ion battery packs because of their higher capacity and smaller size. As a trade-off to their higher performance, however, lithium-ion batteries require dedicated battery monitoring circuits. Fortunately, these circuits are now readily available from multiple sources. Lithium-iron-phosphate (LiFePO4) batteries have improved temperature performance compared to previous types of lithium-ion systems, and are suitable for high discharge rate applications.

Monitoring battery stacks from a remote location using wired media is a tedious and expensive task. Connection mismatch and the cost of implementation make this solution an easy target for replacement by wireless communications. Wireless solutions offer a great deal of flexibility, for example, and are often less expensive.

To minimize corrosion in buried cable, equipment in cell towers (and telecom infrastructure equipment generally) run on voltages that are negative with respect to ground. Telecommunications companies typically use –48 volts. Battery packs are manufactured specifically to meet industry requirements and while many configurations are available, the two most common are either four 12 volt batteries or 24 two volt batteries connected in series to provide the required –48 volts.

It is not trivial to build a monitoring system that can measure and digitize both the condition of individual cells and to estimate the maximum voltage potential of the combined cells. Several solutions are available from semiconductor companies, and, in many instances, the same ICs can be designed into either lead-acid or lithium-based battery systems.

Texas Instruments offers the BQ34z100PWR and the BQ2060A-E619DBQR, for example, and Linear Technology has the LTC6803IG-1#PBF multi-cell battery stack monitor. The LTC6803 is designed to measure total potentials above 60 volts and can survive 75 volt surges. It can be used with lithium cells as well as the traditional –48 volt lead-acid battery stacks. Ideally, the batteries should be monitored by circuitry that is independent of the relative grounding between the batteries and any IT equipment, which makes galvanic isolation desirable.

Although the ADC range for an individual LTC6803 input channel is limited to 5.37 volts, it can still be used to monitor 12 volt lead-acid batteries by spreading each 12 volt battery potential across three channels. Each battery potential is then acquired by adding these three input channel readings. Cell-balancing controls are repurposed to keep voltage dividers activated by setting all DCC configuration bits to one. This results in each channel converting a four volt nominal potential. Figure 2 illustrates a simplified equivalent circuit of one of the four divider sections. 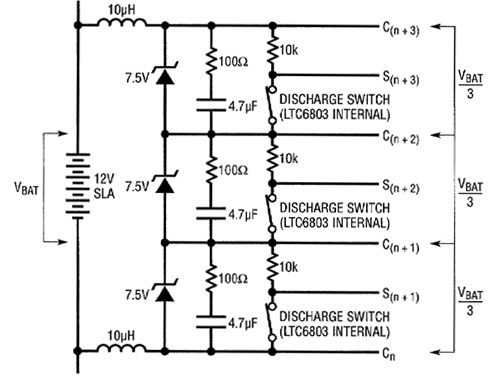 Bypass capacitors (4.7 μF) hold the intermediate voltages as small ADC sampling currents flow, while 100 Ω series resistors and 10 μH inductors provide hot-insert surge limiting. When communication has stopped and the LTC6803 times-out or is set to standby mode, the balancing discharge switches are turned off and the dividers are effectively disconnected so that no appreciable battery drain occurs.

An SPI data isolator must be included to accommodate any grounding differential with respect to the microprocessor that processes the monitoring data. The data isolator also provides isolated DC power rails that can furnish several hundred milliwatts, if needed.

In summary, the 12 volt units are measured by adding the readings of three input channels that have been hardware configured to split the 12 volts into sub-measurements, which achieves an effective full-scale range of 16.1 volts for each battery. Isolation of the data acquisition function from the processor is important for eliminating grounding errors and safety hazards and is provided by the SPI isolator module.

In addition to battery management, another key application in the system is the communications link that communicates battery status to the server (via the MCU), manages the interface between the conventional utility AC power and the backup power, and may even include temperature sensors in its network. In the solution shown in Figure 3, the RF and MCU functions are integrated into a single chip such as Texas Instruments’ CC2510F32RSPR SoC. Alternatively, a two-chip solution can be just as efficient for some design teams, as was previously discussed. A simplified block diagram using TI parts is shown in Figure 3. 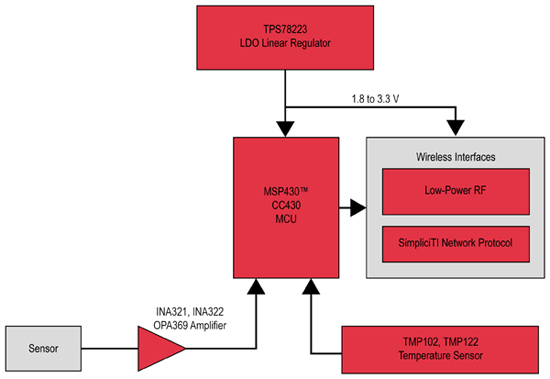 Texas Instruments’ LDO linear regulator TPS78223DDCT (at the top of Figure 3) interfaces with the battery monitoring chip. The interface block on the right communicates wirelessly with the server located in the tower shelter. (For completeness, the network protocol is noted in the wireless interface block.) The SimpliciTI™ protocol is a royalty-free, low-power radio-frequency (RF) protocol targeting small RF networks. Designed for easy implementation with minimal microcontroller resource requirements, SimpliciTI runs out of the box on TI's MSP430™ MCUs and multiple RF transceivers. It is particularly useful for networking applications such as sensor networks that run on batteries and require long battery life.

In addition to receiving voltage data from the battery monitor chip, the MCU also processes data from one or more sensors – typically temperature sensors – that monitor environmental conditions around the battery stack. These sensors are part of a wireless network that includes access points attached to the battery stack – and even the solar panels themselves. When a simple thermistor is used for temperature sensing (left side of Figure 3), the signal requires amplification with an op amp such as Texas Instruments’ OPA369AIDCKR. More sophisticated applications might use an integrated circuit temperature sensor such as TI’s TMP102AIDRLT. Interfacing this type of sensor with the MCU will be the subject of the next section of this article.

Once the data from the solar-powered backup battery system is received and processed by the server, it is relayed to an enterprise server via a WMAX backhaul link.

If the design team opts for a two-chip solution, the key components might be TI’s MSP430F2274 MCU and its CC2500RTKR 2.4 GHz wireless transceiver. Texas Instruments offers an energy harvesting development tool, the eZ430-RF2500-SEH, which is based on these two chips and a solar energy harvester module. The module includes a high-efficiency solar (2.25 x 2.25 inch) panel optimized for operating indoors under low-intensity fluorescent lights, which provides enough power to run a wireless sensor application with no additional batteries. Inputs are also available for external energy harvesters such as thermal, piezoelectric, or another solar panel. For design teams that select the single-chip (MCU/RF) solution, Texas Instruments offers a similar kit, the C2000 Development kit ISO SOLAR MPPT HV.

Temperature sensing of the battery stack is of critical importance to lithium-based backup power systems because overheating may cause thermal runaway and even cell rupture. Lead-acid batteries are more robust but an inexpensive, thermistor-based temperature monitoring is still advised in cell-tower applications.

These measurements are best performed remotely when a wireless network is already in place. There are numerous solutions including the use of discrete transistors, thermistors, and SoCs. When temperature is critically important, an SoC solution is preferred. Texas Instruments’ TMP102, for example, becomes a full-function temperature measurement system when combined with their MSP430 MCU. Power is be supplied by a three volt CR-2032 lithium coin-cell battery and is rated at providing a minimum of 220 mA hours of operation. With the total system average current consumption of 2.45 µA, a complete measurement and display platform capable of continuous operation in excess of 10 years from a single battery becomes a reality. This calculation is given in the following equation:

In order to achieve a low average current, care must be taken to develop the MCU software with a minimum number of active clock cycles. The fast 6 µs wake-up time of the MSP430 DCO and CPU from low-power sleep mode along with the one-shot operation of the TMP102 provides the flexibility to create such a software flow. Figure 4 shows the software flow of the MSP430 through a complete conversion cycle. 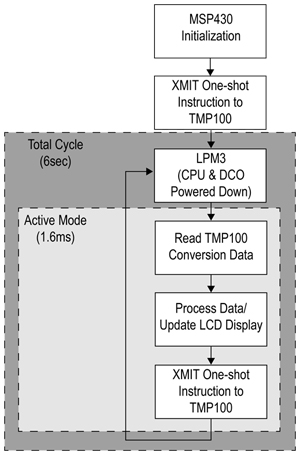 Figure 4: Fast wake-up of the MCU is essential for long battery life (Courtesy of Texas Instruments).

By minimizing the active time of the MSP430 to 1.6 ms per conversion cycle, the total system power consumption can be controlled. The fast wake-up of the CPU and DCO from LPM3 allows the MSP430 to perform the required tasks and re-enter low-power mode as quickly as possible. The CPU then waits for the next timer-generated interrupt and repeats the cycle. Texas Instruments has made additional code optimizations such as straight-line techniques to reduce subroutine calls. For clarity of the software flow, the subroutines are broken out from the main loop.

Cellular tower installations can achieve cost and operational benefits by using solar energy as a backup power source but the batteries that store the solar energy must be monitored for voltage and temperature. Simple, inexpensive wireless networks are ideal for this purpose and can also be used to communicate the sensing information to a local server for analysis and retransmission to an enterprise server. Designing the monitoring and data transmission subsystems has been made easier by semiconductor companies that now offer solutions aimed directly at this application.