Sniffing the Air: Sensors for Monitoring Air Quality and Safety

This article looks at how air pollutants, such as particles and noxious gases known to be harmful to human health can be detected.


Air pollutants such as particles and noxious gases are known to be harmful to human health. In industry, on the other hand, high concentrations of gases such as methane or propane, or carbon monoxide resulting from poor combustion processes, can present an immediate safety risk. To overcome these problems, a wide range of groups such as homeowners, operators of commercial buildings or industrial sites, city councils, and environmental agencies need access to equipment for monitoring air quality and detecting the presence of various gases.

Air pollution, especially pollution by particulate matter (PM), is closely linked to levels of disease and mortality according to the World Health Organization (WHO). Small particles, which may be up to 10 or 25 micron across (referred to as PM10 and PM25), pose the greatest threats to health. Particles of these sizes are emitted by road vehicles and other domestic and industrial activities, and also come from natural sources such as soil or sand. People in either developed and developing nations can be exposed to high levels of PM pollution; a 2012 report by the European Environment Agency found that over 80% of the EU’s urban population is exposed to PM levels above the 2005 WHO Air Quality Guidelines.

City authorities are under pressure to improve air quality. Various transportation-related schemes have been implemented to reduce the effects of vehicle emissions in city centers. Many cities have introduced congestion fees to reduce traffic levels, while other studies and pilots include hydrogen fuel-cell vehicle experimentation by Birmingham and Coventry councils in the UK, and trials of Wireless Electric Vehicle Charging in London, which ultimately aims to establish a practicable infrastructure for widespread use of electric vehicles. Accurate air-quality data will provide vital information enabling authorities to assess the results of such efforts.

As far as indoor air quality (IAQ) is concerned, air purifiers have been available for use in homes and offices for some time. More recently, high-end systems have entered the market incorporating smart sensors to monitor air quality. This information can be displayed to the user via a screen, and can also be used to adjust the purifier for optimum removal of a variety of gases, as well as particles such as small hairs, dust, and tobacco smoke.

One dust sensor, the Sharp GP2Y1010, quantifies the presence of particles in the surrounding environment using an infrared LED and a phototransistor. A sample of the air to be monitored is admitted through a series of holes in the sensor enclosure, located above the IR LED and detector as shown in Figure 1. 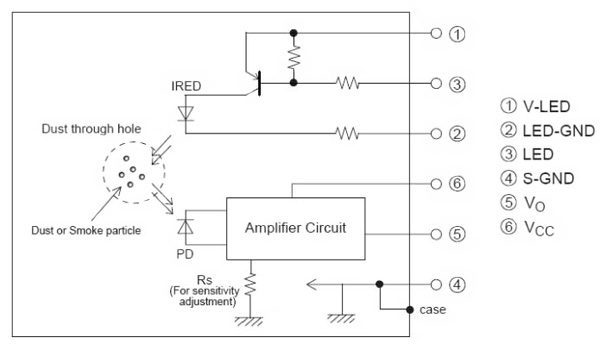 The level of carbon dioxide (CO2) emitted by occupants in a building is also known to have a major influence on air quality, particularly in large commercial premises such as office buildings. Accurate, real-time detection of CO2 provides an effective means of controlling an air-conditioning or ventilation system to optimize air quality and minimize the overall energy consumption of the building. Amphenol Advanced Sensors’ Telaire CO2 sensors, such as the T6613 and T6615, enable HVAC systems to provide Demand-Controlled Ventilation (DCV). In a DCV system, sensors detect rising levels of CO2 when large numbers of occupants are present. The ventilation system is activated only when the level reaches a predetermined threshold, and is turned off again when the level falls to an acceptable level. The system is activated less frequently at times when fewer occupants are in the building, helping avoid over-ventilation of the building. This can reduce the energy consumed by the ventilation system and lower heating costs.

The Telaire sensors detect the concentration of CO2 using Non-Dispersive Infrared (NDIR) technology, which takes advantage of the fact that CO2 molecules absorb a specific wavelength of infrared light. Each sensor incorporates an infrared source, a patented waveguide, custom-designed infrared filters, and a micro-machined thermopile detector to measure the light absorption enabling the CO2 concentration to be calculated. The T6613 sensors use GE’s patented ABC Logic™ self-calibration algorithm, which keeps the sensor calibrated over time with reference to low occupancy levels. The T6615 sensors are dual-channel devices that have separate measurement and reference channels, which enable them to maintain calibration automatically over long periods without using ABC Logic.

In industrial situations, including chemical processing, mining, or manufacturing, leakages of flammable or explosive gases such as propane or methane, or the presence of other potentially hazardous gases like carbon monoxide can present a threat to safety and need to be detected immediately.

The European ATEX directives oblige employers not only to implement explosion-prevention measures in working areas where an explosive environment may be present, but also to provide adequate protection for workers. In particular, Directive 1999/92/EC (on minimum requirements for improving the safety and health protection of workers potentially at risk from explosive atmospheres) states that workers should be given optical and/or acoustic warnings and withdrawn from the area before explosion conditions are reached.

Parallax provides various sensors for use in devices and systems designed to detect hazardous gases, and can be used in either industrial or domestic applications. An example is the Parallax 605-00008 gas sensor, which is suitable for detecting Liquefied Petroleum Gas (LPG), iso-butane, propane, methane, alcohol, or hydrogen, and can also be used for smoke detection. The sensor comprises a miniature alumina (Al2O3) tube, a tin-dioxide (SnO3) sensing layer, a measuring electrode and a heater. The heater maintains the sensing components at their correct operating temperature. When connected into a circuit such as that shown in Figure 2, the resistance of the sensor varies with the concentration of gas detected.

When correctly calibrated, the 605-00008 sensor can be used to trigger an alarm if the concentration exceeds a preset level. Parallax recommends that the detector should be calibrated for 1000 ppm of LPG in air, or 1000 ppm iso-butane, with a load-resistance (RL) between 5 kΩ and 47 kΩ. To achieve an accurate setting, the effects of temperature and humidity should also be taken into account. The gas sensitivity characteristics and temperature/humidity dependency are detailed in the sensor datasheet. 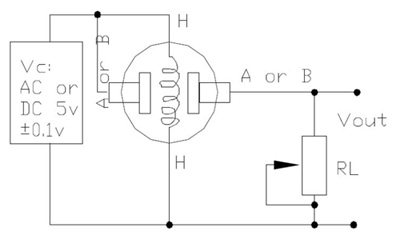 Other applications, for example boiler combustion controllers or oxygen generators used in aircraft, require accurate detection of the flow of oxygen to ensure correct operation of the equipment. An oxygen sensor such as the Honeywell KGZ10 provides a long service life in these types of applications.

The sensor contains two zirconium dioxide (ZrO2) discs with a small hermetically-sealed chamber in between. One of the discs functions as a reversible oxygen pump, which is used to successively fill and empty the chamber. The second disc measures the ratio of the partial pressure difference and generates a corresponding sense voltage. A heating element on the sensor produces the 700°C required for the ZrO2 to achieve its operational temperature. Unlike alternative electrochemical sensors, these zirconia-based sensors require no reference gas, and hence provide greater accuracy and durability.

The KGZ-10 sensor is operated by an electronic measuring circuit that controls the sensor operation and signal processing. Designers can either incorporate this circuit in their own hardware, or use an Oxymac, Elecdit, or DE800 interface board from Honeywell. These interface boards implement all the functions needed to operate and read the sensor, including control circuitry for the heating element, and also support functional testing and calibration. The board’s signal processing section generates a linear output of measured oxygen content in voltage or current format. The DE800 board integrates a power supply for the heater, while Oxymac50 and Elecdit boards require an external heater power supply.

Gas and particle sensors have many important roles in the measurement of air quality for public and personal health purposes, and are vital in industrial safety systems such as hazard warnings and process controllers. Robust sensors for air quality measurement are also effective in helping to reduce the operating costs and environmental footprint of offices or other buildings used by large numbers of people.