This article looks at the integration of sensors into 4-20 mA control loops and field bus implementations in industrial automation applications.

Many sensors are designed specifically for the 4 to 20 mA control loops that are commonly found in industrial process control systems.

A combination of a digital to analog converter (DAC) and an optimized controller, coupled with the clearly defined 4 to 20 mA range, provides a cost effective and reliable sensor network. Using a non-zero output current (4 mA) for the zero point has two key advantages. It allows open-circuit detection at the transmitter, and provides power to the sensor if the current requirement is less than 4 mA. With careful system design, this allows sensors and data acquisition devices to be powered directly by the network and can dramatically simplify the development of industrial automation equipment.

Figure 1 shows a 4 to 20 mA output smart sensor that is completely powered by the loop power supply. In order for this to work, the sum total of all the circuits under loop power can be no more than 4 mA. The heart of the circuit is the AD421 loop-powered 16-bit DAC from Analog Devices. The internal 4 to 20 mA DAC current, as well as the rest of the return current from the AD421 and the other circuits under loop power, flows through the RSENSE resistor. The sensing circuit compensates for the additional return current and ensures that the actual loop return current corresponds to that required by the digital code applied to the DAC through the microcontroller. The sensor output is digitized by a sigma-delta ADC.

Figure 1: A 4 to 20 mA output smart sensor that is completely powered by the loop power supply using the Analog Devices AD421.

The AD421 contains a regulator circuit that controls the gate of the external DMOS FET and regulates the loop voltage to 3 V, 3.3 V, or 5 V to power the loop circuits. In this way, the maximum loop supply voltage is limited only by the breakdown voltage of the DMOS FET.

One of the most common 4 to 20 mA control loop protocols in industrial applications is HART. This uses a frequency shift keying (FSK) technique to superimpose digital communication on to the 4 to 20 mA current loop connecting the control room to the sensor in the field. Two different frequencies, 1200 Hz and 2200 Hz, are used to represent binary 1 and 0, respectively. These sine wave tones are superimposed on the DC signal at a low level with the average value of the sine wave being zero. This allows simultaneous analog and digital communications. This also means no DC component is added to the existing 4 to 20 mA signal regardless of the digital data being sent over the line.

As the phase of the digital FSK signal is continuous, there are no high frequency components injected onto the 4 to 20 mA loop. This allows existing analog instruments to continue to work in systems that use HART with the addition of a simple low-pass filter. A single pole, 10 Hz low-pass filter effectively reduces the communication signal to a ripple of about ±0.01% of the full-scale signal.

The HART protocol specifies that master devices like a host control system transmit a voltage signal, whereas a slave or field device transmits a current signal. The current signal is converted into a corresponding voltage by the loop load resistor in the control room.

The XTR117 from Texas Instruments is a fundamental building block of smart sensors using 4 to 20 mA current transmission and highlights the need to consider the thermal and power dissipation issues of the control loop.

The precision current output converter is designed to transmit analog 4 to 20 mA signals over an industry-standard current loop. It provides accurate current scaling and output current limit functions and the on-chip 5 V voltage regulator can be used to power external circuitry. A current return pin (IRET) senses any current used in external circuitry to assure an accurate control of the output current.

External input circuitry connected to the XTR117 can be powered from VREG and current drawn from these terminals must be returned to IRET as the local ground.

The external transistor, Q1, conducts the majority of the full-scale output current as the power dissipation can approach 0.8 W with high loop voltage (40 V) and 20 mA output current. As a result, the XTR117 is designed to use an external transistor to avoid on-chip, thermal-induced errors. Heat produced by Q1 will still cause ambient temperature changes that can influence the XTR117 performance and to minimize these effects it is important to locate Q1 away from sensitive analog circuitry, including the XTR117 itself.

The XTR117 is designed to use virtually any NPN transistor with sufficient voltage, current and power rating, but the case style and thermal mounting considerations often influence the choice for any given application. A MOSFET transistor will not improve the accuracy of the XTR117 and is not recommended.

However, the current loop can be used as a more powerful and flexible tool for sensor networks. The HCPL-4200 optocoupler from Avago Technologies is designed to operate as a receiver in equipment using the 20 mA current Loop. 20 mA current loop systems conventionally signal a logic high state by transmitting 20 mA of loop current, and signal a logic low state by allowing no more than a few milliamperes of loop current. Optical coupling of the signal from the 20 mA current loop to the logic output breaks ground loops and provides for a very high common-mode rejection. The HCPL-4200 aids in the design process by providing guaranteed thresholds for logic high state and logic low state for the current loop, providing an LSTTL, TTL, or CMOS compatible logic interface to the sensor, and providing guaranteed common mode rejection.

The buffer circuit on the current loop side of the HCPL-4200 provides typically 0.8 mA of hysteresis, which increases the immunity to common-mode and differential-mode noise. The buffer also provides a controlled amount of LED drive current, which takes into account any LED light output degradation. The internal shield allows guaranteed 1000 V/μs common-mode transient immunity.

Data transfer between equipment that employs current-loop circuits can be accomplished via one of three configurations: simplex, half-duplex or full-duplex communication. These all support point-to-point and multidrop arrangements, but the configuration depends upon data rate, number of sensors, number and length of lines, direction of data flow, protocol, current source location and voltage compliance value.

The simplex configuration, whether point-to-point or multidrop, gives unidirectional data flow from transmitter to receiver(s). This is the simplest configuration for use in long-line two-wire systems for high-data-rate and low-current source compliance level applications.

A combination of Avago current loop optocouplers, HCPL-4100 transmitter and HCPL-4200 receiver, can be used at the isolated end of current loops to reduce cross talk and common mode coupling. The full-duplex data rate is limited by the non-isolated active receiver current loop.

The half-duplex configuration, whether point-to-point or multidrop, gives non-simultaneous, bi-directional data flow from transmitters to sensors. This configuration allows the use of two wires to carry data back and forth between local and remote units. However, a protocol must be used to determine which specific transmitter can operate at any given time. Maximum data rate for a half duplex system is limited by the loop current charging time.

HART is just one of many standards that can be used for current loops to connect up smart sensors. Most industrial networks run independently of analog 4 to 20 mA lines, but many are intended to interface (directly or indirectly) with smart sensors.

Networks such as ASI-bus, CAN and HART provide power to smart sensors on the same lines that carry serial data. This has led to the development of the IEEE1451.2 smart sensor interface standard, as well as controllers that are optimized for such systems. This is an extension of the simple 4 to 20 mA control loop to bring key benefits to sensor system development.

In this standard, the smart sensor is referred to as a STIM (Smart Transducer Interface Module). It contains one or more sensors alongside signal conditioning and A/D or D/A conversion required to link to a microcontroller. The microcontroller also has access to nonvolatile memory that contains a “TEDS” field (or Transducer Electronic Data Sheet), which stores sensor specifications that can be read via the industrial network. The NCAP (Network Capable Application Processor) provides the node on the network to which a STIM can be connected.

At the heart of the IEEE1451.2 is a standardized 10-wire serial interface between the sensor and the NCAP, called the TII (or Transducer Independent Interface). In an environment with multiple networks, the TII allows any STIM to be plugged into any NCAP node on any network. When the STIM is first connected to the new NCAP, the STIM’s digital information (including its TEDS) is made available to the network. This identifies what type of sensor or actuator has just been connected and indicates what input and output data are available, the units of input and output data (cubic meters per second, degrees Kelvin, kilopascals, etc.), the specified accuracy of the sensor (±2°C, etc.), and other information about the sensor. This eliminates the software configuration steps involved in replacing or adding a sensor, thereby allowing true ‘plug and play’ performance with network independence.

These elements are now being integrated into a single chip with high-resolution analog-to-digital and digital-to-analog conversion, non-volatile FLASH EEPROM for program and data storage, and a microcontroller.

The highest resolution MicroConverter from Analog Devices is the ADuC816. The analog front end consists of two separate ADC converters with a flexible multiplexing scheme to access its two differential input channels (Figure 4).

The primary channel ADC is a 24-bit sigma-delta converter that offers better than 16-bit signal-to-noise ratio. This primary channel also features a programmable gain amplifier (PGA), allowing direct conversion of low-level signals such as thermocouples, RTDs, strain gages, etc. Two ‘burn out’ current sources can be configured to force a very small current through the sensor to detect open circuit conditions when the sensor may have been disconnected or ‘burned out’. The primary channel ADC can be multiplexed to convert both of the differential input channels, or the second differential input can be routed to the ‘auxiliary channel’ ADC, which is a 16-bit converter with better than 14-bits of signal-to-noise ratio. This auxiliary channel can also be used to read the on-chip temperature sensor. A pair of 200 μA current sources (IEXC1 and IEXC2) can be used to provide excitation for sensors such as RTDs. Both ADCs as well as the DAC can be operated with the internal 2.5 V bandgap reference, or with an external reference. 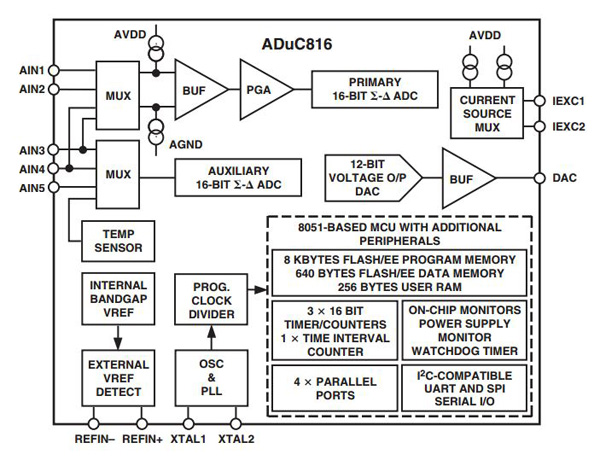 For designs that require the added power of full in-circuit emulation, or the added ease of C coding with mixed-mode debugging, third party development tools, endorsed by Analog Devices, are fully compatible with the MicroConverter devices. These allow the code for the controller core to be developed, compiled and debugged.

The 4 to 20 mA current loop is a key part of an industrial automation system. Connecting sensors with the transceivers and optocouplers is the start, but adding smart controllers turns basic sensors into an intelligent network. The IEEE1451.2 standard extends the use of the 4 to 20 mA control loop with a more complex connection. This allows a microcontroller to be integrated with the data capture and memory storage to allow sensors to be configured automatically over the network. This dramatically simplifies the development of 4 to 20 mA sensor networks, allowing developers to focus on the key requirements of the sensors themselves.