The change in the lighting marketplace from simple manually-operated control switches to smart automated environments has brought a fundamental design shift to the industrial control of lighting.


The change in the lighting marketplace from simple manually-operated control switches to smart automated environments has brought a fundamental design shift to the industrial control of lighting. The integrated use of sensors and distributed microcontrollers communicating through a wired or wireless network is the current norm for retrofit and new designs. Hotenda enables these system developments by stocking specialized microcontrollers and sensors for the lighting control market. These include full hardware and software development environments for both board-level and FPGA-based solutions.

What is lighting automation?

Most lighting automation has been targeted at industrial complexes and high rise office buildings. The primary control was setting the ON/OFF state of the lights. Initially the control was manual – when you would enter a room you would turn on the lights and then turn them off when you left, except in some key areas where the lights were always on for security purposes. The major advancement in the early 1980s was the motion sensor, which changed the ON/OFF function to a “hands-free” function by using simple motion detectors to tell if someone entered the room, in which case it would turn on the light. This simple technology has now filtered down and is an installation/building “code” requirement for residential buildings in light traffic areas.

Lighting automation now has a number of functions to manage since there are multiple types of lighting (incandescent, CFL, LED, OLED). The management functions include status, state (ON, OFF, dim), lifecycle for replacement and repair, power management for the room, sensor feedback, power adjustment (blackout, brownout, load shedding , peak usage control), integration with HVAC, and integration with event and security control. In order to interface with these automation systems, the lighting needs intelligence – distributed information from embedded controllers and sensors that communicate to a centralized management hub through both wired and wireless networks. The key for lighting control in modern automation systems is passive/non-invasive monitoring and active management of the lighting system in the context of the overall energy use and light delivery plan.

Lighting automation also includes traditional DMX512 interface stage and presentation lighting control systems. This is a common fixed-voltage interoperable lighting control standard that lets a program guide timing, movement, brightness, and color controls to 2- and 3-axis performance/presentation lighting. The DMX512 standard defines the communication protocol, commands, and actions possible for the lighting control. Since this standard has been in place for a long time, demonstration and evaluation boards such as those available from STMicroelectronics (the STEVAL-ILL030V1) allow the system developer to create a program and test it with the lighting sets prior to installation. This board uses an ARM® 32-bit Cortex-M3TM microcontroller; the MCU communicates through an RS-485 transceiver and a USB interface and has an STCS1A LED driver. 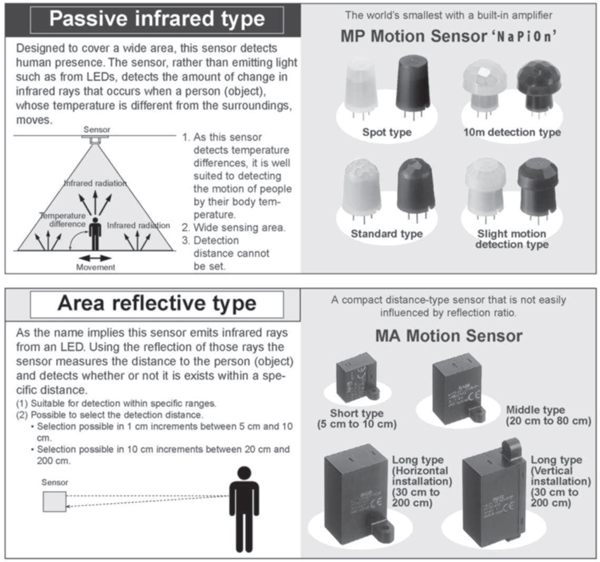 
MP motion sensors work by detecting if people are present in an area. The sensor measures the change in the amount of infrared rays that are in an area when a person’s body temperature “moves” with respect to the surroundings. These sensors do not emit any infrared light; rather they look at the amount of infrared energy that is in their viewing paths. As a result, they have very wide viewing angles and are not distance dependent. The block diagram of a complete MP sensor system is shown in Figure 2. 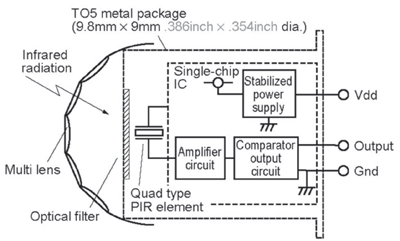 
An MA sensor works by sending out an infrared beam and measuring the amount of reflected light that returns. The sensors control a switch that determines when something comes within a given distance range. They cannot differentiate between people and other objects that may cross into the sensing area, only that something has entered the area and is IR reflective. An operational block diagram of a complete MA sensor system is shown in Figure 3.


MP and MA sensors are separated in design from factory automation (FA) sensors by two constraints. FA sensors are placed in known well-controlled light conditions so that the infrared detectors do not have to handle as large a range of signals when operating. These sensors have a higher sensitivity and shorter response time due to a reduced operating scope. They are also exposed to larger amounts of background electrical noise and thus have a higher noise rejection specification. 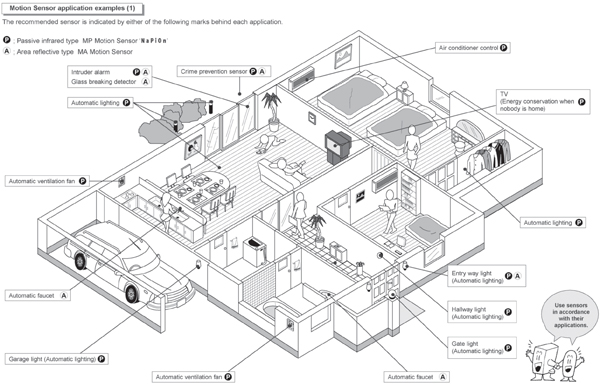 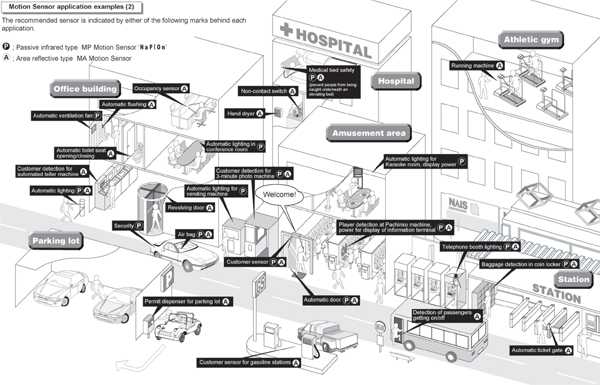 
A more advanced example – assuming there is a microcontroller-based system and a central data analysis/store – is a proactive lighting structure for an office. Assuming that the offices and conference rooms have windows, blinds, lights, HVAC control, temperature sensors, motion sensors, and a computerized conference room scheduling system, an intelligent automation system can do the following:
An important aspect of this scenario is the environmental management that is associated with the lighting of the room. Current fluorescent lighting is responsible for about half of the heat generated in an open office space environment. For this reason, in the winter the lights are left on longer to reduce the cost of heating the area. However in warmer seasons the heat generated and lost in lighting creates a large energy expense for cooling. Florescent lights, ballasts, and their CFL equivalents also have a moderately short life span. These technologies do not adapt well to dimming, and adjustment in room lighting is in “integer” units of lights – two lights with two switches only give you four possible lighting combinations.

As LED lighting makes inroads into the office and residential lighting spaces, temperature management of the lights and the ambient environment is integral to their usability. Temperature sensors such as those found in the Microchip Linear and Interface Selector Guide are available in three classes of output: a simple logic 1/0 if you exceeded a threshold level; an analog voltage output that relates to the temperature; and a serial digital code stream that relates to the temperature. 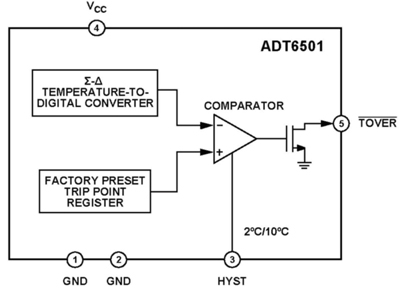 
Analog output devices, such as Microchip Technologies’MCP9700 Low Power Linear Active Thermistor™, have outputs that track ambient temperature. For each of these devices, the voltage output pin can be directly connected to the ADC input of a microcontroller. The temperature coefficients on the MCP9700 can be scaled to provide a 1°C/bit resolution for an 8-bit ADC. This allows the device to keep active track of the room temperature with lights ON/OFF, blinds open or closed, and people in and out of the room. Other devices have integrated data converters and send a serial bit stream out directly to the microcontroller.

Since a typical control environment has a number of sensor inputs, which mandates the need for multiple data channels and data converters, a large number of lighting automation systems are being integrated into FPGAs. FPGAs may incorporate integrated microcontrollers (ARM, MIPS, etc.) and may even allow for multiple independent and dependent cores to exist in one chip. The use of the analog interfaces on current Xilinx and Altera FPGAs simplifies the partitioning of environmental control systems that require lighting to be handled by one active component.

A key element of these control designs is power management. While sensors are standalone circuit elements, they need to be integrated into a closed-loop feedback control system. The control systems end up interfacing with systems that may operate from 3 volts to 480 volts. As a result, it is necessary to monitor the availability of power in order to implement lighting and HVAC control. Since lighting requires active power and it is expensive to operate on backup systems, it is desirable to include automation logistics such as automatic control of window and skylight blinds during brownouts and blackouts. Devices such as the Analog Devices AD5601 single-chip nanoDAC® (see Figure 7) can be used to monitor available power. These devices have internal control logic to guarantee a power-on reset (POR) to zero volts with brownout detection circuitry. The output of this block can be sensed by a microcontroller in order to identify a brownout condition and adjust the lighting accordingly. 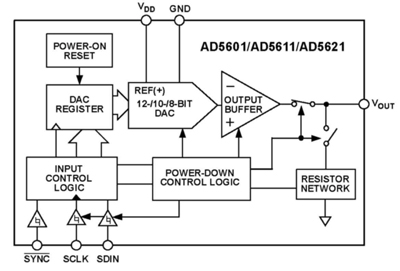 
All of these automation controls require communication between the sensors, control systems, and multiple microcontrollers. Since most industrial environments are a retrofit situation, the lighting and HVAC systems are not wired for control. In order to keep the sensor and control data off of the normal IT system, these groups do not generally use wireless communication protocols. Instead they tend to use power line modems that place a carrier signal containing data over an existing power line; or they may use Power over Ethernet (PoE), which provides power over a standard data line. While most engineers have heard of power line modems and understand how they communicate, the PoE system is new. There is an on-line tutorial from SL Power Electronics on the Hotenda website that explains the technology and how to use it properly.

Automation systems for lighting need a combination of sensors, microcontrollers, and software/driver electronics. The proper use and placement of sensors is important to make these systems functional and cost effective. These products, as well as full datasheets, product training modules, and support, are directly available from Hotenda.