Smart Houses Are Getting Closer as Wireless Solutions Provide Connectivity

The smart and connected home of the future, one that can control all the appliances, provide communications, sense an occupant’s presence, control entry and exit points, and much more, is getting closer.


The smart and connected home of the future, one that can control all the appliances, provide communications, sense an occupant’s presence, control entry and exit points, and much more, is getting closer. Although a complete solution is still years away, bits and pieces of the smart/connected home have started to appear, wireless networks let users move audio and video content, connect their computers to the Internet and to each other, link-in various appliances, and monitor the house when they are away. More and more appliances and security products are also gaining network interfaces, among them lights, curtains, cameras, and door locks, as well as heating and cooling systems.

Unfortunately, there seem to be as many connectivity solutions as there are devices to connect. Various wireless technologies now in the home consist of various varieties of Wi-Fi (802.11 a, b, g, n, and ac), Bluetooth and Bluetooth Low Energy, Z-Wave, ZigBee, WiGig (802.11ad), and several proprietary wireless interfaces. Additionally, although the MOCA (multimedia over coax alliance) protocol as well as G.hn and HomePNA use wires, they do not actually add any new wires to the house; rather, they use existing coax cables from the cable TV system or the home’s existing powerlines to transfer media content or control commands. Simple adapters provide a bridge between the coax or power line and the wireless or wired Ethernet network that is basically the backbone network in the home.

The connectivity choices available to designers span multiple technologies, and each technology has different characteristics that can be leveraged. Therefore, a smart home does not need to be a “unified” system that uses only a single standard, but can be built using multiple wireless technologies that complement each other rather than compete with each other.

Table 1 summarizes ranges of various network interfaces, as well as some of the limitations and synergies that the most popular connectivity options provide. For example, in a large house, Wi-Fi signals may not be able to reach from one end to the other, so either a signal booster/repeater will be needed. By using either MOCA or powerline adapters, data can be sent over the powerline or coax cable and then, in the remote location, a small adapter can siphon the data signal off the coax cable or powerline and convert it back into a Wi-Fi (or other standard wireless) signal. The two technologies become synergistic and do not necessarily compete with each other.

The same synergy exists between other wireless technologies. Wireless control standards such as Z-Wave or ZigBee can link through a gateway to the Wi-Fi signal or directly to the Internet. ZigBee is already in widespread use by utility companies in electric and other utility meters so that meter readings can be done without entering the property. Meters can also leverage data over powerline approach to send usage data back to the utility company with no human interaction. Additionally, large appliances such as dishwashers, refrigerators, washing machines, and others, when outfitted with ZigBee or Z-Wave interfaces that tie into a gateway from the utility company, can be remotely disabled (with the homeowner’s consent) during daytime hours when demand on the power grid is highest, and then turned back on in the evening once the power demand drops. Not only does the utility reduce the need to build additional generating capacity, but also homeowners can save on their utility bills since evening rates are often lower than daytime rates.

Smart wireless sensors, Wi-Fi-capable cameras, thermostats, Z-Wave-based door locks, ZigBee control modules for dishwashers and washing machines, and many other products with communication interfaces are all vying for use in the smart home. All these devices can be linked together via some form of network gateway, which in turn ties into the Internet. An application running on a PC, a tablet, or a smartphone can then remotely control the appliances, monitor energy usage, or collect statistics to create an energy profile of the home. The Z-Wave solution offered by Sigma Designs employs a mesh network that automatically routes the RF signal from one Z-Wave node to the next, around obstacles and radio dead spots, resulting in high reliability and assured whole home coverage. The ability to also use the Z-Wave protocol over IP (Internet Protocol) networks allows Z-Wave enabled products to connect seamlessly using the wireless mesh network, the home network, and the Internet.

Sigma Designs recently released its fourth-generation of Z-Wave node controller, the ZM4101 (Figure 1) and a version that contains a subset of the ZM4101’s features, the ZM4102. The ZM4101module is a complete RF transceiver and controller, all housed in a 56-contact quad-sided flat package. It offers a 2.5-times improvement (up to 100 kbits/s) in the data transmission rate versus the company’s previous Z-Wave controller, the ZM3102 (40 kbits/s), and includes new features such as IR generation and learning (for remote controls), a larger internal memory, a 128-key matrix scanner, a USB port, an AES128 security engine, and still other enhancements. 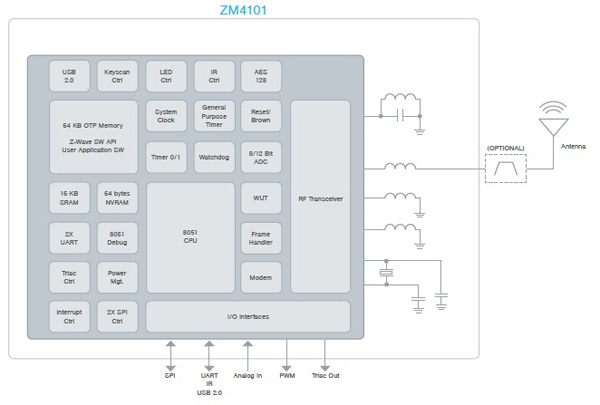 Figure 1: A system-in-a-package is the integrated solution for Z-Wave offered by Sigma Designs. The ZM4101 is housed in a 56-contact quad-sided package and includes the RF transceiver, an 8-bit 8051 processor core, and lots of peripheral support functions (Courtesy of Sigma Designs). 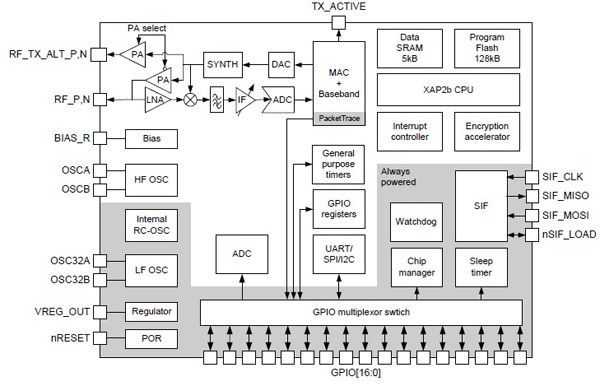 There is no single wireless solution that meets all the design and cost requirements for the smart/connected home. However, by leveraging each technology’s strong points, and employing the appropriate bridging technologies, designers will enable elements of each, and then complete the smart home of the future (and relatively soon).