Push or pull? Likely if that's the action, and the field is electronics, a force sensor is involved. Simply put, force sensors are transducers that convert mechanical force input into an electrical output signal.


Push or pull? Likely if that’s the action, and the field is electronics, a force sensor is involved. Simply put, force sensors are transducers that convert mechanical force input into an electrical output signal. Piezoelectric force sensors are used for such measurements as impact, high-speed compression, oscillation, and tension.

Force applied to a sensing element affects the atomic structure of the material, causing a separation of charges and the output signal. Force sensors are used in a variety of automotive applications such as brakes, air bags, speed control, suspension, and transmission. They have a wide range of medical, gaming, industrial, and aerospace uses.

Piezoelectric crystal force transducers are used with a charge amplifier to integrate the electric charges formed on a crystal surface to a given and measurable signal proportional to the force applied. These sensors are unique in that they are active sensors that do not require a power supply, and signals are easily generated without causing geometric changes to the force measurement route. They have a high-frequency response capability that makes them suitable for dynamic measurement, but because of leakage of charge from the charge amplifier, also called drift, they cannot perform static measurements accurately. They have small dimensions and can operate well within a wide temperature range, and are typically used to measure oscillation, impact, and high-speed tension and compression.

Measurement of force through pressure is accomplished by means of hydraulic load cells or pneumatic load cells. In the first case, the hydraulic load cells are typically filled with oil that already has a specific preload pressure. Fluid pressure is increased by applying force to the loading member so that a result is measured or displayed on a pressure gauge dial. Given their self-contained nature and that they do not need external power, they can be used in potentially explosive environments. In comparison, a pneumatic load cell is similar to its hydraulic load cousin, except that force is applied to one side of a diaphragm of flexible material (or piston), and the force is balanced by pneumatic pressure on the other side. Here, air pressure is applied to a chamber and it builds until it is equal to the force on a close-fitting cap on the chamber. Increased pressure lifts the cap and air escapes until pressure equilibrium is present. The pressure in the chamber at equilibrium indicates the force on the cap, and the results are read on a pneumatic pressure dial.

There are several examples of force sensors today that have features that were not typically found in their predecessors. For example, in the past, a piezoresistive load cell was extremely expensive. Today, however, cost and performance breakthroughs by parts such as the Measurement Specialities FC22 compression load cell sensor (Figure 1) have opened up new markets and applications. 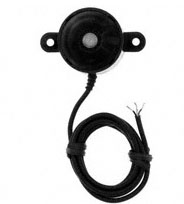 The Parallax FlexiForce 30056 sensor (Figure 2) features an active sensing area that is a 0.375-in. diameter circle at the end of the sensor. Conductive leads are easy to connect to a breadboard or through-hole area and it has an ideal output for A/D conversion whereby 0 V is no force and 4.2 V is 100 lbs. 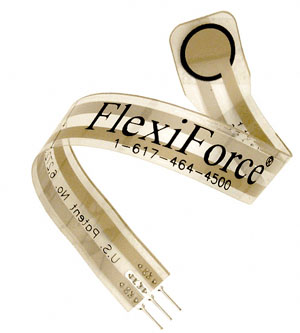 
Particularly beneficial is the range of applications it targets including industrial automation where it can be used from robotic grip forces to compression moldings and automotive products including airbag force and seatbelt tensioners. Medical applications include forceps closure and bandage/cast pressure, and other uses include alarm systems, joystick handles, touch pads, and weather seals and strips.


The sensor concentrates force from the application through the stainless-steel ball, directly to the silicon sensing element; the amount of resistance changes in proportion to the amount of force applied. The package design uses elastomeric technology and engineered molded plastics for load excitation capacities of 4.5/5.5 kg over force. The stainless-steel ball is adaptable to a variety of applications including medical infusion pumps, occlusion detection, kidney dialysis machines, variable tensions control, and robotic end-effectors.

Interlink’s FSR 400 series (Figure 4) is composed of single-zone force-sensing-resistor (FSR) polymer thick-film (PTF) devices that yield a decrease in resistance with an increase in force applied to the sensor’s surface. The sensitivity of the device is optimized for use in human touch control of such electronic devices as automotive electronics, medical systems, industrial applications, robotics, and even musical instruments.


At 0.35 mm, the sensor is ultrathin, and it has a 7.62-mm diameter. It features an actuation force as low as 0.1 N and a sensitivity range to 10 N. Its highly repeatable force reading is as low as 2 percent of initial reading. The family is also offered in a wide range of custom sizes. We’ve explored just a sampling of the large number of force sensor products announced recently Advances can be seen in biomedical sensing where wearable force plate systems are designed using small, tri-axial force sensors, robotics applications to determine exoskeleton motion, and innovative uses of force control in tactile sensing. The affordability and performance of these devices are both increasing dramatically, and force sensors are being employed well beyond their historical uses for repetitive tasks and in rugged environments.