In part 3 of the disposable radios series, single-chip radio transceivers that embed a microcontroller alongside the radio for higher performance are examined.

In Parts 1 and 2 of this series we examined low-cost and small-size narrow-band AM-, FM-, FSK-, and PSK-style radios for specialized and disposable purposes. While many distributed sensor and control systems can take advantage of the lower cost and simpler nature of these types of throw-away radios, many cannot and require a microcontroller to monitor, acquire, process, format, compress, log, encrypt, and send the data.

Many high-performance, low-cost single-chip radios are peripheral style, using serial protocols and requiring external digital controllers. This means an external embedded microcontroller, which may not be an issue if space and cost parameters are within reach.

However, this embedded intelligence can also come on the radio chip itself. One approach device manufacturers have used is to take a general-purpose micro and dedicate it to radio operations, while leaving space for user apps. This allows a small, low-cost and low-power solution to be available that still carriers with it the benefits of modern digital protocols supporting point-to-point, broadcast, peer-to-peer, ad-hoc, and mesh types of architectures that can utilize the “cloud.”

This article will examine single-chip radio transceivers that embed a microcontroller alongside the radio to achieve higher levels of performance. All parts, data sheets, tutorials, and development systems referenced here can be found on the Hotenda website.

A hop in time

A key benefit of modern RF protocols such as Wi-Fi, Bluetooth, ZigBee, RF4CE, 6LowPAN, and others is that they can hop frequencies. The partitioning of the available bandwidth means that even while staying within the ISM 2.4 GHz band, several devices can be operating simultaneously, mostly without hits or errors.

DSSS has higher capacities and operates over wider bands but can be sensitive to environmental factors like reflections. Point-to-point or short-distance hops are good applications for DSSS technology, which is typically used for wireless LANs in office buildings, between buildings, or even Point of Presence (PoP) to base-station links in cellular systems. 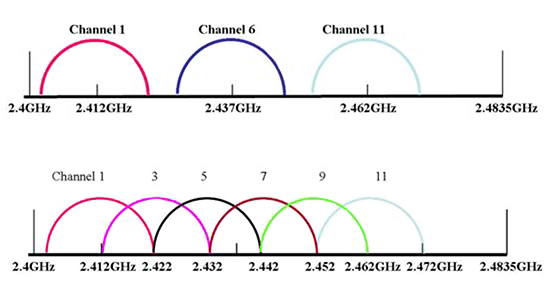 Figure 1A (top): When channels do not overlap, designers can count on higher throughput and, overall, more highly reliable links when there is no competing traffic. When channels overlap (Figure 1B, bottom), throughputs can be pretty good, but more elasticity needs to be designed into buffers since collisions, retries, and malformed packets will need to have data re-sent using Structured Data Protocols (STP).

FHSS uses narrow-band signals located around different carrier frequencies and is not as influenced by noise, plus – in general – it is a more robust technology. A key benefit with FHSS is that more devices can be operating simultaneously within a geographic area. These “collocated systems” let FHSS systems cover wider areas with large numbers of nodes.

While narrow-band transmission schemes limit transmit power to 1 mW levels, up to 1 W (1,000 times more power) can be burst out at any one time with many of the spread-spectrum ISM band protocols. FHSS systems can offer higher bursts of power within their assigned non-overlapping bands (Figure 2). This is significantly higher than fixed narrow band and even better than DSSS. This makes the technology ideal for both line-of-sight sensor systems such as environmental sensors in fixed locations, as well as animal tracking sensors that migrate. Fixed location sensors like seismographs, oceanic sensors, and volcanic gas sensors can take advantages of directional antennas to further boost performance.

System designers can also use time-division multiplexed techniques coded into these large numbers of sensors to further allow increased throughput based on each sensor’s internal real-time clock. If comprehensive energy harvesting is designed in, these remote sensors can operate indefinitely.

One of the disadvantages of modern 2.4 and 5 GHz ISM band networks is the inability to penetrate surfaces like walls and partitions. The lower frequencies typically do a much better job of transmitting through barriers and obstructions. If an application is line-of-sight or relatively unobstructed by solid surfaces, this is not a concern.

Encryption may be key

Unmanned Aerial Vehicles (UAVs, aka drones) are a good example of an application where secured, disposable high-end radios are employed, either as war machines that are actively targeted, or as remote-controlled vehicles sent into dangerous situations, such as a burning building. In many cases, high reliability, redundancy, and the expectation that the equipment may not make it home are all tied together into the designer’s calculations. Here, encryption is key, especially with regard to control.

One factor to look for when selecting a single-chip micro and radio is the type of encryption solution used. Hardware accelerated portions of the micro can speed this task up significantly over more software-intensive approaches. This can let the processor be used in burst mode, then sleep to save energy.

Another key decision to make is the distribution or singularity of processing resources. Many single-chip micro and radio solutions contain processors with enough horsepower to control the radio as well as run a user application program or two. Using a single processor instead of turning the embedded process on the radio chip into a dedicated radio-controller peripheral saves space, time, money, and a second code development project.

Both chip- and module-makers support this approach but it is up to the designer to choose a processor/radio combo with enough resources and performance. Fortunately, many suppliers offer free stack software for the embedded micro that reduces the radio functionality to API calls. This coupled with comprehensive development systems and application support can be a big time saver.

Embedded processors and radio-combo chips range from 8-bit to 32-bit architectures using Von Newman-, Harvard-, RISC-, and CISC-type processors. Each has their place and applications where they are ideal. Both small size and low cost may be factors, as can be familiarity with a specific architecture. Surprisingly, there are many good 8-bit contenders.

Evidence of this is shown with the Atmel AVR architecture, which takes advantage of a high-performance advanced RISC 8-bit processor that can deliver up to 16 MIPS at 1.8 Volts. The ATMEGA128RFA1-ZU, for example, is housed in a fairly small 64-pin VFQFN package and data rates up to 2 Mbit/sec can be achieved using this ATMEGA Series part.

Note that in addition to the mesh-based ZigBee protocol, this part handles 6LoWPAN, RF4CE, SP100, IPV6, WirelessHart, and other ISM-style protocols and supports 800-900 MHz, as well as 2.4 GHz radios.

Ideal for telemetry and remote-data acquisition, this part has 10-bit A/D converters with 330 K samples/sec rates, as well as on-chip temp sensors and AES security in hardware. Very few external components allow small-sized PC boards, and you can use real-time-clock 32.768 KHz crystals as a low-power oscillator while preserving real time.

User programs are loaded via Jtag and development system support is available for the AVR for ZigBee (with the ATAVR128RFA1-EK1) and for RF4CE (with the ATRF4CE-EK). Several online Product Training Modules are available including an introduction to ZigBee Low Power Apps.

Another powerful 8-bit solution is available from Cypress with its CYRF69303-40LTXC, based on the popular M8C core. A nice feature here is a dynamic data-rate receiver that automatically sets itself up for the right baud rates. This can be useful to fall back to a lower data rate if RF conditions are noisy. It also has a nice 250 Kbit/sec DSSS mode and up to a 1 Mbit/sec GFSK mode which is ideal for bursting small blocks of data.

Texas Instruments has an interesting player in this field. Using the Bluetooth protocol, the company offers the popular 8051-based CC2541F128RHAT that supports both classic streaming mode, as well as Version 4.0 Low-Energy mode. Overcoming the older limitation of cycles per instruction helps boost performance and 256 K Flash provides a lot of space for user code. The 8 K of RAM is enough for buffers and many applications with nice data rates up to 2 Mbits/sec.

While many would think this little 8-bit core would run out of horsepower, it’s not so. The TI solution offers nice features like programmable output-power levels, auto-address decoding, 12-bit A/D converters, AES security, and DMA. Enhanced USARTs are included which can handle seven serial protocols.

Like most other single-chip micro/radio combinations, both primary crystals and 32.768 KHz real-time clock crystals can be used to drive the processor. Code selectibility allows for lower power sleep modes. Also like other single-chip combos, very little external circuitry is needed, freeing up a lot of I/O (Figure 3). 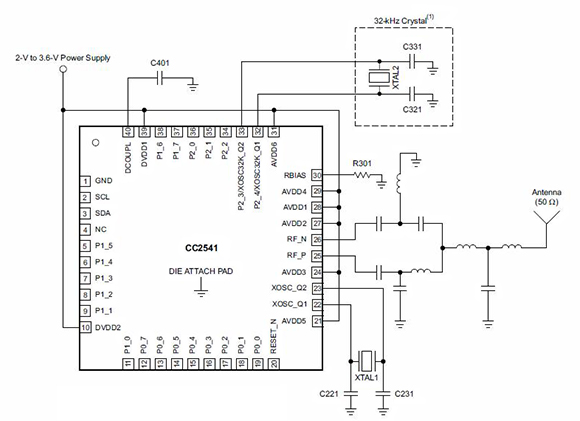 Figure 3: When microcontrollers and radio systems can coexist on a single chip, typically very few external components are needed to implement the wireless data link. This leaves plentiful digital and analog I/O for the task at hand.

While many 8- and 16-bit processors are adequate for most remote data gathering and often disposable operation, sometimes a little more horsepower is required to allow a micro to wake up, acquire, process, and send as quickly as possible to save and preserve power reserves. As such, most modern, high-end and higher-throughput ISM-band radios are using 32-bit generic architecture processors like the ARM families.

For example, the Silicon Labs 32-bit ARM Cortex -M3 EM3582-RTR is a meatier and higher-end microcontroller and radio chip combo. Designed to handle the more process- and resource-intensive ZigBee Mesh protocol, it provides developers with significantly more resources for customization and programming, including 512 Kbytes of Flash and 64 Kbytes of RAM.

A nice feature of these parts is that they are designed to specifically co-exist with Bluetooth and Wi-Fi networks. This means data is more likely to get through in a highly trafficked area. The data rate of 921.6 Kbits/sec is pretty good, too.

Just because a radio link will be disposed of or never heard from again after its intended purpose has been fulfilled, does not mean it has to be feature-limited, unreliable, and hard to develop. As we have seen, several heavy hitters in the industry have stepped up to the plate and they could be smacking home runs for you.