Combining the operation of a boost regulator and a negative voltage converter can generate a negative supply from a single low-voltage supply. The circuit in Figure 1 shows a standard application circuit for a +20 V supply along with two op amps, two diodes and two capacitors to generate the – 20 V supply. This article will discuss the basic operation of a boost converter to generate a larger positive supply voltage. Equations are derived to determine the minimum inductor value to maintain a safe peak inductor current, and a maximum inductor value to maintain continuous conduction mode (CCM) operation. The article will then discuss the generation of a negative supply and the restrictions of the design.

Before we add the additional circuitry to generate the negative supply, it is important to understand how the boost convertor produces an output voltage that is always greater than the input voltage. In order to do this, we analyze the boost circuits in Figure 1 and the current waveforms in Figure 2. For this analysis, we account for all the losses in the charging and discharging loops in our equations. This should help to give a complete understanding of the circuit.

However, the output voltage is not dependent upon any losses in the circuit. This is because all the losses are inside the circuit’s feedback loop of the ISL97701—which we will use as an example here—and are automatically accounted for. The output voltage is defined from the feedback resistor network shown in Figure 1 and calculated in Equation 1, where VrefFB is the internal reference voltage of the ISL97701.

Figure 1a shows the basic boost converter circuit. During one switching cycle, the transistor Q1 turns on and turns off. During the time Q1 is on, the inductor L1 is placed in series with the VIN supply through the ISL97701’s integrated boost FET (Q1). The diode D1 is reverse biased and the circuit reduces to that shown in Figure 1b. The voltage across the boost inductor (L1) is equal to VIN – (VDS + IL1 x RL1) and the current ramps up linearly in inductor L1 to a peak value at time DT. The peak inductor current (ΔIL1) is calculated in Equation 3 and shown graphically in Figure 1b. Any load requirements during this phase are supplied by the output capacitor C1.

When Q1 turns off, because the current in an inductor cannot change instantaneously, the voltage in L1 reverses and the circuit becomes that shown in Figure 1c. Now the no-dot end of L1 is positive with respect to the dot end and D1 becomes forward biased. Because the dot end is at VIN, L1 delivers its stored energy to C1 and charges it up to a higher voltage than VIN. This energy supplies the load current and replenishes the charge drained away from C1. During this time, energy is also supplied to the load from VIN. The voltage applied to the dot end of the inductor is (VIN – IL1 x RL1). The voltage applied to the no-dot end of L1 is now the output voltage (VO) plus the diode forward voltage (VD). The voltage across the inductor during the off-state is ((VO + VD1 + IL1 x RL1) – VIN). The inductor current during the off-time of the switch (T-DT) is calculated in Equation 4 and shown graphically in Figure 1c.

In steady-state conditions, the current increases during the on-time of the switch and decreases during the off-time of the switch (Figure 2). Both on-time and off-time currents are equal to prevent the inductor core from saturating. Setting both currents equal to each other and solving for VO results in the continuous conduction mode boost voltage shown in Equation 5. 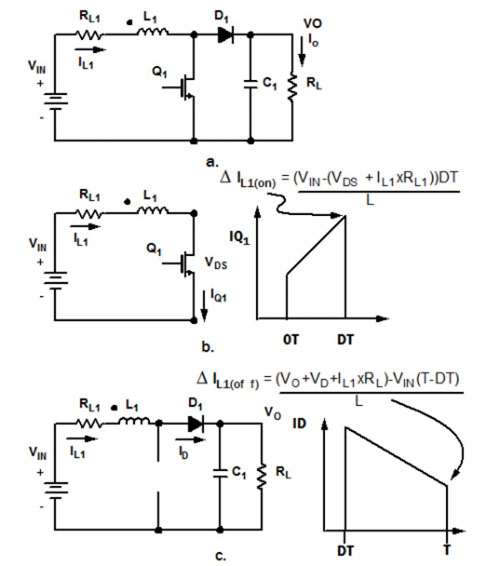 Figure 1: Portions of standard application circuit for a +20 V supply to generate a – 20 V supply. 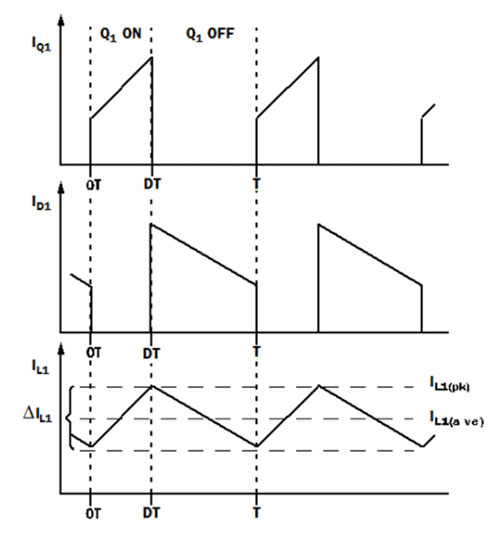 The inductor selection determines the output ripple voltage, transient response, output current capability and efficiency. Its selection depends on the input voltage, peak inductor current, output voltage, switching frequency and maximum output current. When choosing an inductor, make sure the saturation current of the inductor is greater than the IPEAK of the circuit. Likewise, the transistor should be able to handle peak current greater than IPEAK. The peak inductor current is shown in Figure 3 and can be calculated using Equation 8.

By rearranging the terms in Equation 11, we can solve for the inductor value using Equation 12.

Equation 12 is useful for determining the minimum value of L that the circuit can handle without exceeding the peak current through the inductor, and therefore the switch Q1. The maximum peak current (IPEAK) allowed through Q1 for safe operation is given in the electrical table as 1.2 A.

Equation 12 gives us the boundary condition for the smallest inductor we can have to ensure the peak current through Q1 is less than the max limit of 1.2 A. Plugging all these numbers into Equation 12 (see Equation 13) results in the minimum inductor value for the given conditions to be 1.94 μH.

Rearranging terms and solving for L results in Equation 15.

To maintain continuous conduction mode operation for the given circuit design conditions above, the value of L has to be greater than 7.96 μH (Equation 16).

It should be noted that when there is a light load, the circuit can slip into discontinuous conduction mode, where the inductor becomes fully discharged of its current each cycle. This operation will reduce the overall efficiency of the supply. Using Equation 15 and making the value of the inductor large enough for a given minimum output current will ensure continuous conduction mode operation.

Low ESR capacitors should be used to minimize the output voltage ripple. Multilayer ceramic capacitors (X5R and X7R) are preferred for the output capacitors because of their lower ESR and small packages. Tantalum capacitors with higher ESR can also be used. The output ripple can be calculated in Equation 17:

For noise sensitive applications, a 0.1 µF placed in parallel with the larger output capacitor is recommended to reduce the switching noise.

The operation of the negative supply is best understood by considering Figure 5. We will start our analysis under steady state conditions (the inductor operating in continuous conduction mode and C1 is equal to the voltage calculated in Equation 1).

When Q1 turns off, the inductor voltage flies up turning on D1 and D3. Diode D2 is blocking current flow from C3. The inductor current now charges both capacitors C1 and C2 with the polarity shown in Figure 5. The voltage on C2 is equal to the voltage on C1 plus the forward voltage drop of D1.

When Q1 turns on, Diodes D1 and D3 are blocking and capacitor C2 is now in parallel with capacitor C3 through D2 (which is now on), reference Figure 4. This connection results in a negative voltage being transferred on to C3. The voltage transferred to C3 is equal to the voltage on C1 as shown in Figure 4 and Equation 18. 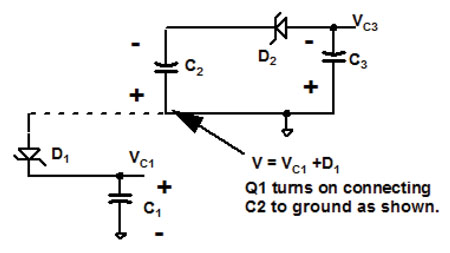 The efficiency of the charge transfer between the two capacitors is related to the energy lost during this process. ENERGY IS LOST ONLY IN THE TRANSFER OF CHARGE BETWEEN CAPACITORS IF A CHANGE IN VOLTAGE OCCURS. The energy lost is defined in Equation 19:

Where V1 and V2 are the voltages on C2 during the charging and transfer cycles. If the impedances of C2 and C3 are relatively high at the 1MHz frequency compared to the value of RL, there will be substantial difference in the voltages V1 and V2. Therefore it is not only desirable to make C3 as large as possible to eliminate output voltage ripple, but also to employ a correspondingly large value for C2 in order to achieve maximum operation efficiency.

The final output voltage regulation is accomplished using the ISL28208 Dual Opamp. The voltage developed by the boost converter powers the amplifiers and the output voltage is calculated using Equations 20 and 21.

The ISL97701 is optimized to work best for a small range of inductors. The slope compensation ramp generator, inside the ISL97701, is optimized for inductor values between the range of 4.7 μH to 15 μH and output currents between 25 mA and 125 mA. The circuit will work perfectly fine outside these ranges, as long as the maximum IPEAK current is not exceeded (Equation 11). The only drawback will be a reduction in the efficiency of the circuit. The percent efficiency could drop from the 80s to the 60s as the operation goes from continuous conduction mode to discontinuous conduction mode. Reference the ISL97701 data sheet for additional information on performance.

Figure 5: Standard application circuit for a +20 V supply to generate a – 20 V supply.