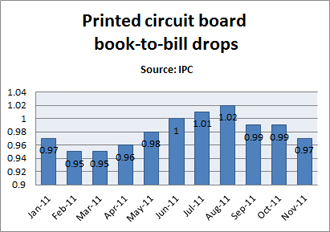 However, shipments and new orders for rigid boards and flexible circuits in November decreased from November 2010. Shipments in November 2011 fell 6.2 percent, while orders booked declined 5.6 percent compared to the same month last year, according to IPC.

Year to date, combined industry shipments were down 1.6 percent and bookings were down 8.5 percent.

The combined (rigid and flex) industry book-to-bill ratio in November 2011 declined to 0.97 from 0.99 in October, the IPC reported. That means board suppliers received only $97 worth of new orders for every $100 of boards and flexible circuits that they shipped in November. A ratio of more than 1.00 suggests that demand is ahead of supply, which usually means sales growth for the next two or three months, according to IPC.

“North American PCB sales in November increased over the prior month, which is consistent with seasonal patterns,” said Sharon Starr, IPC market research director. “Sales this year continue to lag behind sales in the same months of 2010. Orders are up in the flexible circuit segment, but weak in the rigid segment.”