The three-month average of worldwide bookings (new orders) in November 2011 was $973.3 million, five percent more than the final October 2011 level of $926.8 million. However, bookings were 35.7 percent lower than the $1.51 billion in orders posted in November 2010, SEMI reported.

The three-month average of worldwide billings (shipments) in November 2011 was $1.17 billion, 6.7 percent less than October 2011 when shipments totaled $1.26 billion. Billings were also 25.1 percent lower than the November 2010 billings level of $1.57 billion, according to SEMI. 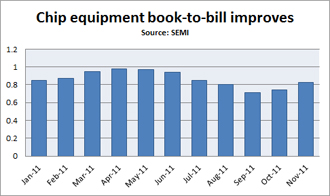 “We see improvement in the book-to-bill ratio due to a slight increase in bookings as we approach the end of 2011,” said Denny McGuirk, president and CEO of SEMI. “The industry waits for definitive signs of stability in the worldwide economy, which will improve end market demand and help solidify investment plans for 2012.”

The SEMI book-to-bill is a ratio of three-month moving averages of worldwide bookings and billings for North American-based semiconductor equipment manufacturers.