Shipments of Boards and Flexible Circuits Fell in July

The seasonal slowdown in the electronics industry resulted in fewer shipments and declining new orders for rigid printed circuit boards and flexible circuits. 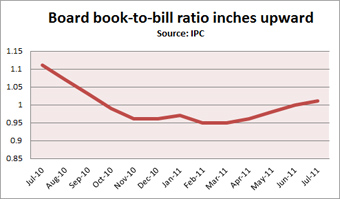 New orders for PCBs and flexible circuits decreased 16 percent in July compared to the same month last year. Year to date combined industry shipments were up 2.4 percent, while bookings were down 8.5 percent, reported the IPC.

Compared to June 2011, combined rigid board and flexible circuit shipments in July decreased 24.2 percent and bookings decreased 20.8 percent. The combined industry book-to-bill ratio in July increased to 1.01 from 1.00 in June, according to the IPC. A book-to-bill ratio of 1.01 means that board manufacturers received $101 of new orders for every $100 of boards that they shipped. A ratio of more than 1.00 suggests that current demand is ahead of supply.

IPC President and CEO Denny McGuirk noted that July is typically a slower month than June for the PCB industry. “Negative year-on-year growth rates in North American PCB sales and orders for July reflect slowing growth compared to the height of the recovery one year ago,” he added.

McGuirk said the book-to-bill ratio was above parity, “largely due to the continued strength of flexible circuit orders.”

Rigid board shipments decreased 24.8 percent in July compared to June, while new orders decreased 19 percent. The book-to-bill ratio for the North American rigid PCB industry in July was 0.99, according to the IPC.

The combined book-to-bill ratio is heavily affected by the rigid PCB segment. Rigid PCBs represent an estimated 89 percent of the PCB industry in North America, the IPC noted.

Flexible circuit sales include value-added services such as assembly, in addition to bare circuits. In July, the flexible circuit manufacturers in IPC’s survey indicated that bare circuits accounted for about 48 percent of their shipment value reported for the month.