Sensor fusion somponents and technologies help create contextual awareness for a variety of applications including smartphones and industrial applications.

Sensor fusion can enable context awareness, which has huge potential within the Internet of Things (IoT).  Context has many definitions and involves many aspects, including location, time of day, temperature, emotional state of the user, orientation, and even the preferences or identities of people within an environment. All of this data can be useful, if it can be accurately obtained and analyzed. The information involved in context awareness needs to be located, described, measured, and analyzed on the fly, which, of course, is the bailiwick of sensors, and in particular  of sensor fusion.

Still, this entails more than just installing and combining multi-axis sensors as even advanced sensor fusion technology can have difficulty meeting context-sensing requirements for several reasons: 1) because computation and analysis must be made in a mobile environment; 2) available sensors are often widely distributed; and 3) for the context-based system to be commercially successful, the employed sensors must be inexpensive.  To meet these goals, highly complex algorithms are required to optimize sensor outputs and integrate with other technologies (such as GPS, Wi-Fi, and Bluetooth) to provide the necessary picture of the physical world that can enable a variety of (IoT) applications, including search, mapping and directional assistance, mobile advertising, and e-commerce  (for this last application enhancing the customer experience by engaging them in real time through their mobile devices and providing timely offers and relevant information depending on their current location and preferences).

Cell phones are ubiquitous and a truly context-aware phone could move from one profile to the next as a user drives a car, enters a store, or arrives at home. When the device is fully context aware, it is technologically easy to apply rules that produce smart behavior in the device.

The sensors that would make up this context-aware smartphone would need to rely on certain sensor elements being true. For example, they all need to comparatively low power. Also required is a precision three-axis accelerometer.  The 834M1 Accelerometer by Measurement Specialties, for example, is a low-cost, board-mountable tri-axial accelerometer designed for use in high-amplitude embedded applications and wake-up switch applications. The accelerometer features a maximum current consumption of 22 micro-amps and incorporates full power and signal conditioning.

Other sensors that are involved when adding contextual awareness to mobile devices include IR tag readers and IR active tags that identify indoor locations and that recognize the user’s circumstances, such as sitting in a meeting room, sitting in the driver’s seat of a car, etc., microphone sensors that recognize the user’s voice, and GPS receivers that provide outdoor location information.

For example, integration of GPS capabilities can include such technology as found in the Xsens MTi 100 series MEMS-based inertial navigation system (INS), vertical reference unit (VRU) and inertial measurement unit (IMU). Based on a sensor fusion algorithm that exceeds the capabilities of Kalman filtering, MTi 100-series devices are tuned for performance under vibration and magnetic distortion and feature state-of-the-art tracking performance, a motion processing core for multiple sensor inputs and data sources, a comprehensive SDK, and straightforward system integration.

Not all IoT applications need be consumer oriented, however. The Industrial Internet of Things (IIoT) is using contextual awareness to open new frontiers for improving processes. Industries such as chemical production are installing Internet-connected sensors to bring greater granularity to monitoring. These sensors feed data to process control systems (and sometimes to the cloud) after which the data is analyzed and signals are sent to actuators that adjust and optimize processes, for example by modifying ingredient mixtures, temperatures, or pressures. Sensors and actuators are also being used to change the position of a physical object as it moves down an assembly line, ensuring that it arrives at, for instance, a lathe station in an optimum position.  When multiplied hundreds of times during an entire process, positional accuracy can result in major reductions in material waste, energy costs, and human intervention.

Position sensors in IIoT applications provide access to location.  A rotary-position sensor, for example, translates an angular mechanical position to an electrical signal and is used in applications where it is necessary to control a variable output such as frequency and speed. The ams AS5600 12-bit Programmable Contactless Potentiometer is an easy-to-program magnetic rotary-position sensor with a high-resolution 12-bit analog or PWM output (Figure 2). It measures the absolute angle of a diametric magnetized on-axis magnet. 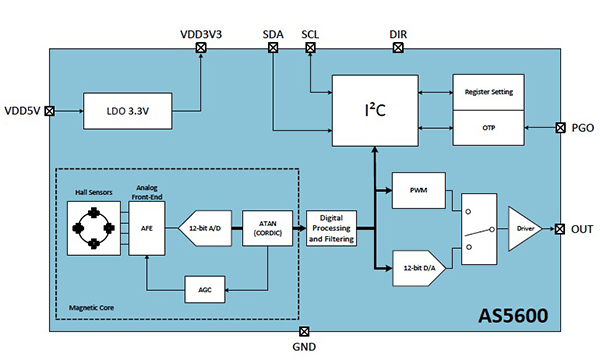 Designed for contactless potentiometer applications, the IC interface supports simple user programming of non-volatile parameters without the need for a dedicated programmer. Output of the device represents a range from 0 to 360 degrees. The AS5600 is also equipped with a smart, low-power mode feature to automatically reduce power consumption.

Given that smartphones are popular tools, expanding their business, recreation, and emergency communications capabilities so that users can tap into ever greater services within constantly changing environments makes sense.  As such, for IoT applications emphasis will remain on developing small, lightweight, low-power and inexpensive sensor components to add greater context awareness capabilities to smartphones.