Despite growing demand, prices and leadtimes for sensors will be mostly steady. 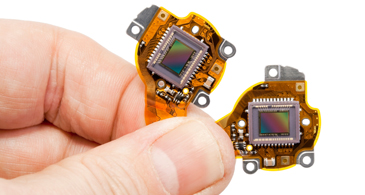 Sensors were one of the few bright spots for the semiconductor industry in 2012, as sales increased a healthy 12 percent, driven by strong demand from automotive systems, smartphones, media tablets, and medical equipment. The overall semiconductor market declined 3 to 4 percent in 2012.

The good news for buyers is that while sensor demand has been robust, prices and leadtimes have been mostly steady and will likely be stable in 2013.

Researcher IC Insights said demand was strong for all sensors in 2012, including image, accelerometer/yaw, pressure, and magnetic field sensors, among others. 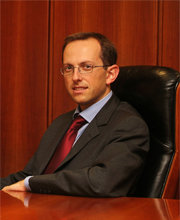 “The sensor market has grown faster than the overall chip market because the penetration of sensors is still relatively low,” said Benedetto Vigna, executive vice president and general manager, analog, MEMS & sensors group, industrial & multisegment sector for STMicroelectronics.CMOS image sensor revenue will end 2012 growing 21 percent to a record $7.1 billion, according to IC Insights, which does not include image sensors in the same sensor category as pressure, acceleration/yaw, and magnetic field sensors. Total image sensor revenue, including CMOS sensors and CCDs, will total $9.5 billion in 2012, the researcher reported.

Pressure sensors will post 15 percent growth this year as revenue pushes to a record $1.1 billion, according to the researcher. They are used in automotive systems for automated tire pressure gauges, stability control, and airbags. Some pressure sensors are even used in microphones, said Lineback.

Acceleration/yaw sensors will end 2012 growing 11 percent to $2.6 billion. “They are placed in cell phones to detect movements and to do navigation,” Lineback noted. Magnetic field sensor revenue is up 12 percent to a record $1.4 billion. These sensors are used in motor control and automation.

All sensor segments are strong because of efforts to “improve the efficiency and manufacturing and also to automate self-control and calibration and monitoring in portable devices,” said Lineback.

He added that sensors are being designed into systems that did not include sensors in the past.

“More and more sensors are being packed into cell phones and just about everything, including consumer electronics,” said Lineback. They are needed to improve power consumption and to have some greater levels of intelligence in devices.

“Tablets are loaded with sensors,” he added. “Apple made a big effort to put a lot of sensors into the iPhone and the iPad. The devices have a lot of system control. That's why the screen rotates automatically because it has a sensor in detecting gravity using accelerometers and gyroscopes.” 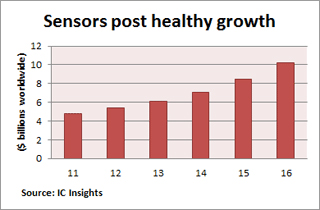 Automotive sensors will post strong growth because of increasing government mandates for safety features in vehicles, such as tire pressure monitoring.

Other government mandates will also result in greater sensor demand, according to suppliers.

“One of the things that is driving our sensor business is a new mandate that vehicles in North America must have a stability control system,” said Max Liberman, product marketing manager at Analog Devices, headquartered in Norwood, Mass. Such systems require a gyroscope and low-G accelerometer.

He added that China, Korea and Taiwan are working towards a similar mandate in the future.

“There is growth in demand for systems that monitor o stability on taking turns,” said Liberman. “There is a rollover sensing and roll stability sensing. There's pitch sensing and tilt sensing.”

Liberman noted that more sensors will be placed on the periphery of cars and eventually more will be put in the back of a vehicle as well.

Sensors will also be used in self-park and "super-cruise control," systems, which combine cruise control with lane centering technology.

Whether in vehicles or media tablets, sensors are also driving use of other chips. “For every sensor you have, you need to have some processing to get the information to make some use of it. Often microcontrollers are used,” said Lineback. 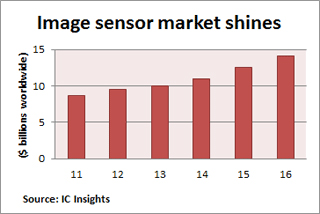 Growing use of image sensors in cell phones, media tablets, and other devices will drive image sensor revenue past the $14 billion mark in 2016.Sensor demand will remain robust for years. IC Insights expects the sensor market to grow from $5.4 billion in 2012 to $10.2 billion in 2016.

Despite strong demand, there will not be much change sensor prices in 2013, according to Lineback. Sensor production and demand is in balance and suppliers “are keeping up with demand fairly well.”

Suppliers have invested in capacity. For instance, STMicroelectronics this year has “increased capacity in assembly and test to meet growing customer demand,” said Vigna.

Prices should remain stable, at least in the short term. In fact, some sensor tags will decrease.

Some chipmakers are focusing more on sensors because of this growth. “There have been cases where suppliers have been involved with one type of sensor and they moved into other areas of sensors,” said Lineback. “Perhaps they were into acceleration gyroscopes and they then moved into pressure sensors.”

One key technology trend buyers should watch is sensor integration.

Lineback noted that there is a trend toward multichip packaging, combining different sensors together to create a multi-sensing device. The sensors are placed “into a portable device that has the capabilities of pressure, temperature, motion and other functions. It is a kind of a multidimensional sensor,” he said.

Some are packaging sensors in inertial measurement units. “There are quite a few companies doing that, including STMicroelectronics, Toyocom, and Freescale,” Lineback added.