This article looks at the challenges of developing sensor systems for unmanned aerial vehicles (UAVs), from pressure to vibration and position sensing.


This article looks at the challenges of developing sensor systems for unmanned aerial vehicles (UAVs), from pressure to vibration and position sensing. The aircraft environment presents different sets of challenges, from the sensor node architecture to power and weight management.

A new generation of unmanned aerial vehicles (UAVs) is being developed to enhance monitoring of many kinds of systems. From tracking bush fires in Australia to monitoring traffic in the US, these UAVs are making the most of the latest sensor technology in various ways. For example, infrared cameras can track missing people at night, while laser spectroscopy is used to monitor pollution in the air.

Having airborne sensors can significantly enhance the quality of data that is acquired by giving more flexibility to move around and faster response times. This is coupled with a move from remotely piloted aircraft to autonomous systems that need inertial navigation sensors, combining accelerometers and magnetometers with GPS systems. All of this requires more focus on the integration of sensor systems in an aerial application that is severely constrained in power and weight.

Changing the sensor architecture can even take the control sensors out entirely, allowing the size of the UAV to reduce dramatically. This has created a new class of ultra-small UAV.

In the meantime, researchers are using handheld UAVs to develop and test their sensor systems. Phastball-0 was developed at West Virginia University (WVU) in the US for traffic congestion, safety, and environmental impact studies. The hand-launched UAV has a 96 inch wingspan and a takeoff weight of 21 lb, including 7 lb of remote-sensing payload. The aircraft is piloted remotely with a 9-channel R/C radio system and is powered with a pair of brushless electric ducted fans. The use of an electric propulsion system simplifies the flight operations and reduces vibrations on the on-board sensors.

Researchers at Goethe University in Frankfurt, Germany, are using a UAV to bridge the data gap between satellite photographs to monitor soil erosion in Morocco. A fixed-wing Sirius I UAV developed by MAVinci in Germany has been equipped with a Panasonic digital system camera, and surveys are conducted over different study sites with varying extents and flying heights in order to provide both very-high-resolution, site-specific data and lower-resolution overviews. Image processing coupled with GPA data enables the creation of Digital Terrain Models (DTMs) and image mosaics with very high resolution, quantifying erosion in 2D and 3D. It also facilitates analysis of the surrounding areas and landscape development.

While the business case has UAVs monitoring the external situation, the aircraft themselves also have to be monitored. Internal sensors are a vital part of the development of UAV systems to ensure that the aircraft are operating correctly and safely, and here sensors such as strain gauges can be used to monitor the condition of the airframe and avoid problems in flight. These need to be connected to an ADC data converter and then linked to a microcontroller via an SPI interface. This data can then be stored for later analysis, analyzed within the aircraft, or transmitted back to the ground for monitoring the UAV performance.

As there is no human input, the ability to collect and process data about the UAV is vital, and the weight and size constraints make this a key challenge for the designer.

The power available for sensors and the wireless sensor network is also severely constrained. The 2.5 meter Green Falcon developed at the Queensland University of Technology in Australia is powered by twenty-eight monocrystalline solar cells. These generate 0.5 W for the on-board cameras and sensors to track the progression of bushfires. 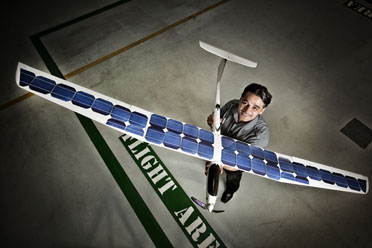 Figure 1: The Green Falcon UAV from Australia generates just 0.5 W from its solar cells to power its sensors.

Larger UAVs use their increased surface area to generate more power from solar cells, allowing more sensor systems to be used. The Solara 50 for example is 15.5 meters (54 ft.) long and can carry a payload of 32 kg (70 lb). The craft is powered by 3000 solar cells across the upper wing, elevator, and horizontal stabilizer to provide up to 7 kW, storing the excess in lithium-ion batteries in the wing. This provides enough power to keep the UAV in the air for up to five years at 65 mph and a cruising altitude of 20 km (65,000 feet) as an airborne monitoring station. A larger version, the Solara 60, will be 60 meters (197 feet) across and can carry up to 100 kg (250 lb). 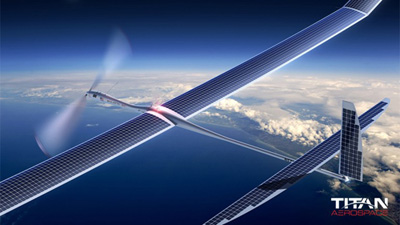 Figure 2: The 7 kW of power generated for the Solara 50 will allow it to power its sensors for up to five years.

Some of the sensors used are integral to the operation of the UAV, with gyroscopes and accelerometers used to monitor the position and orientation of the aircraft. The Solara 50 also has a variety of onboard sensors in the payload with high-speed radio links that transmit telemetry data back to the ground station.

Similarly, the UAV research group at the University of Minnesota is using hobbyist remote-controlled aircraft such as the Ultra Stick 120 to develop a low-cost, open-source, small UAV flight research facility. The goal is to support research activities within the department including control, navigation and guidance algorithms, embedded fault detection methods, and system identification tools.

The group uses three sizes of the Ultra Stick aircraft family: the 120, 25e, and Mini, and has installed a variety of sensor subsystems. The inertial measurement unit (IMU) uses the Analog Devices iSensor® ADIS16405 while the GPS system uses the Sirf III chipset. 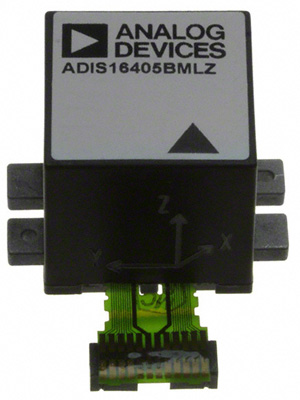 The team used the Semtech SX8724C Zooming ADC that gives up to 16-bit resolution as the primary ADC to interface to pressure sensors from Honeywell. This data acquisition system is based on Semtech's low-power Zooming ADC technology and directly connects most types of miniature sensors with a general-purpose microcontroller.

With three differential inputs, it can adapt to multiple sensor systems. Its digital outputs are used to bias or reset the sensing elements. The acquisition chain is an input multiplexer, three programmable gain amplifiers, and an over-sampled A/D converter. The reference voltage can be selected on two different channels, and two offset compensation amplifiers allow for a wide offset compensation range. The programmable gain and offset allow the application to zoom-in on a small portion of the reference-voltage-defined input range.

An eight-input multiplexer is used to select the analog inputs, while the reference input is selected between two differential channels. However, as the input amplifier is always operating in differential mode with both positive and negative input selected through the multiplexer, only seven acquisition channels (including the VREF) are available in the single-ended configuration.

The core of the zooming section is three differential programmable amplifiers (PGA). After selection of an input and reference signals VIN and VREF combination, the input voltage is modulated and amplified through stages 1 to 3. Fine gain programming up to 1000 V/V matches the resolution to the sensor. The final two stages provide programmable offset and, if needed, each amplifier can be bypassed. The output of the cascade of the PGA is then directly fed to the analog-to-digital converter (ADC), which converts the signal into a digital stream for the microcontroller. This data can then be stored or packetized and transmitted wirelessly to the ground.

The ADIS16405 iSensor from Analog Devices is a complete inertial system that includes a triaxal gyroscope, accelerometer, and magnetometer. The system combines iMEMS micro-machined technology with signal conditioning that optimizes dynamic performance. CMOS technology is employed to reduce both the size and cost of the sensor and power consumption. Each sensor is characterized in the factory for sensitivity, bias, alignment, and linear acceleration to tackle the gyroscope bias. As a result, each has its own dynamic compensation for correction formulas that provide accurate measurements from −40°C to +85°C. The magnetometers have a self-correction function to provide accurate bias performance over temperature. Tackling the temperature variations that occur in sensors used in UAVs is a key element in ensuring that the data received is accurate and usable. 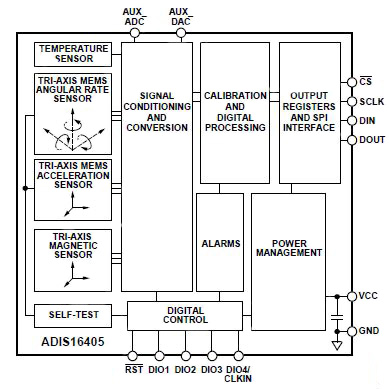 Figure 4: The block diagram of the ADIS16405 iSensor from Analog Devices.

Compared to discrete designs, the ADIS16400 provides a simple, cost-effective method for integrating accurate, multi-axis inertial sensing. System integration time is minimized because testing and calibration are part of the production process at the factory; and in navigation systems, tight orthogonal alignment simplifies inertial frame alignment. An improved serial peripheral interface (SPI) and register structure provide faster data collection and configuration control, and by using a compatible pin-out and the same package as the ADIS1635x and ADIS1636x families, upgrading to the ADIS16400 requires only firmware changes to accommodate additional sensors and register map updates.

Although the ADIS16400 produces data independently, it can also operate as SPI slave devices that communicate with system (master) processors. The SPI operates in full duplex mode, which means that the master processor can read the output data from DOUT while using the same SCLK pulses to transmit the next target address on DIN.

Unmanned aircraft are especially useful in penetrating areas that may be too dangerous for manned aircraft. This requires a wider array of sensors. The National Oceanic and Atmospheric Administration (NOAA) in the US is using the Aerosonde UAV as a hurricane hunter, measuring wind speeds and pressure drops with absolute pressure sensors. The UAV, built by AAI of Australia, provides near-real-time data directly to the National Hurricane Center in Florida. It provides measurements much nearer the water’s surface than earlier systems, in addition to standard barometric pressure and temperature readings. UK UAV maker UAVSI also has a version of its Vigilant 20 kg system designed specifically for scientific research in severe climates such as the Antarctic.

The sensor architecture is becoming increasingly important, whether the sensors are on the UAV or on the ground makes a huge difference to the design. While this might sound strange, the US DARPA research agency has been working with experienced mobile app developers on the ADAPT Adaptable Sensor System. This is a flexible sensor framework that can be used in various settings, but will focus on intelligence, surveillance, and reconnaissance (ISR) designs using a customized build of the Android operating system.

In DARPA’s test, a simple quadcopter uses the ADAPT sensor to automatically track its distance from the ground. The unattended ground sensor (UGS), which is built on an ADAPT core, relays the flight instructions to the UAV and so allows the ‘copter to be much smaller. DARPA believes that ADAPT could lead to faster and more efficient deployment of technology in the military, but the sensors could find their way into consumer electronics at some point as well, such as the Crazyflie from Bitcraze. This is a 9 cm x 9 cm quadcopter that weighs just 19 grams and comes in two versions, differentiated by the onboard sensors. The quadcopter can fly for up to seven minutes, and the lithium polymer battery takes around 20 minutes to charge through a standard USB dock. 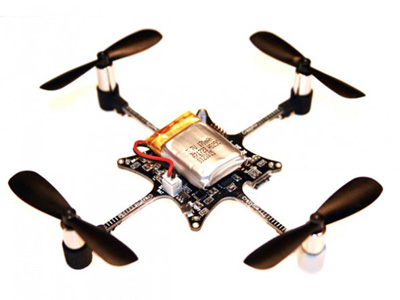 All manners of sensors are being integrated into UAVs for both internal and external use, but the power supply and weight constraints still limit what can be added to such a system. Infrared and traditional digital still and video cameras and even laser spectroscopy systems are being used in UAVs to provide a vast range of measurements. However, the sensors themselves are also needed for controlling the UAV. The more sophisticated inertial measurement and GPS tracking systems used make use of the latest silicon technology to reduce power and weight. Micromachined sensors provide the rugged accelerometers that can be used effectively in UAV systems with highly-integrated data processing to further reduce the power consumption and size.

By thinking in different ways about the sensors architecture, UAVs can be made dramatically smaller and used in new and different ways.