Sensors Bring Light to the Office

The industrial lighting space is one where well-defined light types and colors are used for specific tasks.


The industrial lighting space is one where well-defined light types and colors are used for specific tasks. As a result, both object- and photon-based sensors are heavily employed to ensure both performance and conformance of lighting in a given situation. These situations include ambient environment lighting and high power lighting that is embedded in machines as part of machine vision systems. The sensors involved in such systems generally provide not only go/no-go determinations for the lighting control, but also value-metric data associated with the light. This information is used for both monitoring and control of the lighting using custom mixing of the light patterns. In advanced applications, these sensors may be part of a control loop that includes DMX-based light sequencing and manipulation (on, off, dimming, etc.)

The industrial lighting market is different from the residential market in that most of the locations for lighting solutions for industrial lighting are either difficult or costly to control. Most utility type lighting is left on at all times in garages, stairwells, basements, and storage areas. Since their utilization is random and unscheduled, it is not cost effective to hire staff to manually control the lights. These areas are also large, so the localized automation that was historically available is not practical to support the lighting control function.

Other types of industrial lighting are difficult to control due to location. In machine lighting, movable lighting (either standalone or tethered to equipment), and tall facility lighting, manual control is a challenge. The issue with automation is the speed, reliability, and the ability to discriminate between situations, which, if mastered, can enable active control rather than leaving the lights on at all times.

A connected “smart” sensor approach addresses a number of these issues by using the proper combination of sensors and sensor types, and high-speed actuators as well as wired, optical, and wireless communication to identify the context of an industrial situation and determine the best course of action based on a decision matrix. This capability is possible on either a remote or local basis due to the capabilities of the embedded processors and the speeds of the internal state machines for sensor processing.

The most common application for lighting control involves turning on the lights when it is dark, made possible by an ambient light sensor. Products such as the Panasonic Electric Works AMS104W (Figure 1) are used to determine the amount of light in an area. This product has a linear output in response to the amount of light detected by the sensor, which responds to the same spectral frequencies as the human eye. For this reason, the unit is used to control the amount of dimming that is used for surveillance camera lights in order to provide an even image from dusk through the night and in passageway/staircase lighting that varies through the course of the day. The analog output is typically sent to a data converter and then processed, which is then used to construct a systematic table of actions from which the processor can drive the lighting control block. 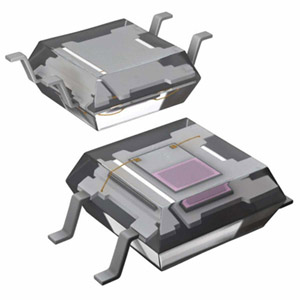 Vishay makes an ambient light sensor – the 1206 SMD family – which focuses on a slightly different wavelength. This sensor can be used to set the dimming level of the light, but it can also be used for full on/off control for simple day/night operation. Figure 2 shows the range of sensitivity for the sensor. Since the output is linear, it can be used in mobile devices and display screens to help set the brightness of an LCD screen. These simple sensors are now being integrated into multiple sensor units such as Vishay’s VCNL4010-GS08, which incorporates a fully integrated proximity sensor, an ambient light sensor with infrared emitter, an I2C interface, and an interrupt function. This unit not only contains the sensor, but also all of the processing logic. 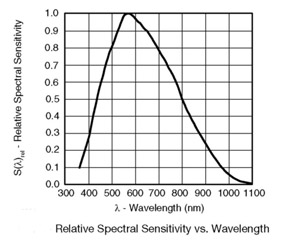 These integrated units are becoming popular in electronic control lighting, edge-lit dimming for LED displays, and keyboard backlighting for mobile and control devices. The advantage of the integrated system is that the systems developer only needs to be concerned with the rate of the proximity sensing (1.95 to 250 measurements per second) and the rate of ambient light measurements (one to ten samples per second); the system then provides the quantitative results directly to the I2C bus. Figure 3 shows the simplified system block diagram and test setup for the device. These systems include auto offset compensation to enable mobile devices and industrial lighting to create differential lighting levels rather than absolute levels.

Programmable control for measurement levels is essential in an industrial environment, where there are different load speeds and operational levels of the equipment on the factory floor. It also makes a difference in facilities with defined work hours. For example, an on/off control for stairwell and garage entry lighting may be stepped up to six to eight samples per second during the arrival and departure times for employees but stepped back down to the one sample per second level at night when there are very few people around (a proximity sensor in conjunction with an ambient light sensor also works).

Additional product training and solutions for ambient light sensors from vendors such as ROHM Semiconductor, Intersil, Maxim, and Vishay can be found on Hotenda’s website.

The advent of high-speed embedded signal processors and DSPs has brought a new level of lighting control to the industrial marketplace. Image sensing, using mid-speed products such as the OmniVision Technologies’ OVM7690 fully integrated camera module, is gaining in popularity as a supplement to other sensor information. These standalone modules (see Figure 4) incorporate an imaging CCD, signal processing logic, and an output interface in order to provide a full-color VGA image at 30 fps. This level is adequate for cell phones, but is also finding its way into surveillance, webcams, and automotive applications. A typical application for lighting control would be a motion sensing device used in conjunction with an ambient light sensor for primary control of access area lighting. The addition of an image processing module would allow for determining if it was a person, an animal, or a delivery truck entering the area. With this additional information, the system can determine whether it should turn on the light to scare away an animal; turn it on to a mid-level for a person entering the area; or turn it on brightly for a material delivery. 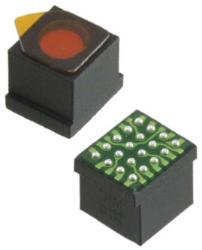 All of these systems need to convey digital information to the lighting control blocks. When the control environments are a long distance from the control modules, or if the location is electrically noisy, machine connections can also use fiber optic interconnects, which are immune to electrical and magnetic noise. While there are very high speed communication-level fiber optics, it is also easy to install, manage, and replace data links using a low-cost 1,000 μm plastic fiber optic cable. These connectors do not require any special tools to assemble. You just cut the cable flat with a razor or single blade knife; insert the cable into the connector; put the cable flush against the micro lens; and then screw down the connector locking nut to hold the cable in place.

Industrial Fiber Optics’ IF-E91D fiber optic IR LED module (see Figure 6) can be used for low-cost digital links up to 100 Mbps at distances of ten meters. They are used to create local networks and pass sensor data in audio systems, robotic and automotive communications, and electronic gaming applications in situations where standard copper wire is not appropriate. The flexibility and low weight of fiber optic solutions make them a key interconnect technology for sensor interfaces. 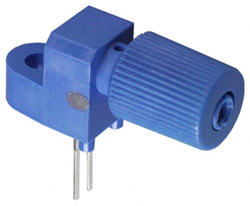 The integration of sensors into the lighting flow to determine the correct type and amount of lighting is heavily based on a distributed signal processing environment. Smart sensors with local processing are often used along with traditional single-function sensors to determine the correct lighting action. This distributed processing enables a smaller and lower cost central processing solution to drive the whole lighting system. In the industrial sector, the entire flow –including the office, the factory, parking, access and exterior lighting – is managed in one place.

The common denominator in all of these systems for the lighting control is on/off switching and dimming. Imaging systems can use a simple on/off function controlling multicolored lights to maintain uniformity of the color spectrum in an area. Ambient light sensors are actually tuned to various wavelengths of light, typically 500 to 660 nm and/or the 940 nm spectrums. With the addition of colored LED lamps such as TT Electronics’ OVM18F4x7 blue LED module, control systems can balance the color of ambient light. Color-specific LED modules are used in embedded directional signage, overhead lighting, and graphics wall applications.

Graphics wall applications and multicolor lighting solutions are generally managed from a DMX interface. The DMX control system is an outbound language that allows situational timing and multiple light unit control. For large complexes such as parking garages and factory floors, you can build a motion tracking system that follows vehicles, materials, and people with location-specific lighting. This can create a huge energy savings by enabling other lighting units to be turned off, with sensors for motion, proximity, and ambient light tracking movement and adjusting the lighting accordingly. This use of lighting coordinates well with facilities security, resulting in a reduction of product losses, at the same time increasing personnel safety, all under autonomous control.

The industrial lightning application space is one with minimum operator control. This requires the sensor interface to monitor and control the lighting environment for the ambient area around equipment, as well as non-operator accessible areas inside the factory. With the advent of optical inspection and photonics-based metrology for the manufacturing process, lighting control can contribute substantially to cost effective operation of a factory floor. The use of quantitative sensors in this application enables the autonomous lighting system to be both adaptive and operate for an extended period, alerting the system only when there is a need for operator intervention.