Part 1 of a multi-part series, this article describes the many different sensors that convert real world physical/analog values into an electrical signal.


Part 1 of a multi-part series, this article describes the many different sensors that convert real world physical/analog values into an electrical signal. The steps a designer must take toward the various ways to condition the sensor – that is, amplify, filter, and error-correct that signal – will be discussed first from an analog perspective (because, obviously, all the world is analog) and then touch upon conversion to a digital signal with methods of digital signal processing typically integrated into the sensor.

Piezo-resistivity, directly translated, means pressure resistance. The root word “piezo” is derived from the Greek word “piezein,” meaning to press tight or squeeze. The balance of the term is resistance. Put the two together and we arrive at squeezed resistance. So piezoresistive materials, when squeezed or moved under pressure, will vary in resistivity. Lord Kelvin discovered this phenomenon in 1856.

Piezoresistive sensors can measure various physical dimensions, but the most often used are pressure and acceleration (The Measurement Specialties’ US300 series or Freescale’s MPX10 series, in a bridge format, are piezoresistive bridges). The main difference in working principle between pressure and acceleration types is the way the forces are applied to the sensing element. In a pressure or force sensor a thin membrane is used to guide the force to the piezo elements. In accelerometers the forces are applied by an attached seismic mass which loads the piezo elements according to Newton’s second law of motion F=ma. Since a great many accelerometers are capacitive bridges such as Analog Devices’ ADXL345, we will discuss these separately in another article.

Finally, the discrete sensors we will discuss in this article involve four piezoresistive semiconductors in a closed Wheatstone bridge configuration (see Figure 1) such as Honeywell/Microswitch’s 24PC or SX series (There are other configurations such as single-ended outputs, open bridges or half-bridges but these will not be discussed in detail in this article). There are a myriad of models to choose from on the Hotenda website from Bosch, EPCOS, Freescale, Honeywell, Measurement Specialties, Omron, SMC and SSI.

In a full bridge all legs respond to pressure and in a half bridge only two legs respond to pressure.1 When pressure is applied to an active- bridge (see Figure 1) the resistances of the diagonally opposed legs changed equally and in the same direction. As the resistances in one set of diagonally opposed legs increase with pressure, the resistances in the other set decrease, and vice-versa. The bridge is typically ratiometric which means the V0 changes in a ratio to VCC which is also known as excitation voltage VE.1 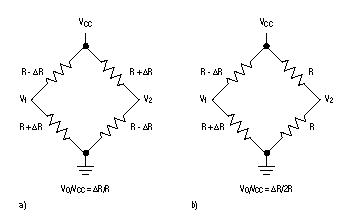 If the designer selects a sensor that is fully integrated with signal conditioning circuitry and digital conversion such as Honeywell’s ASDX series, then one need go no further. Your job is done since this is a self-contained and complete solution. However, if you want to customize a solution with a discrete design, then read on.

Now let’s get on to the sensor conditioning design process which can calibrate, compensate for temperature variations, linearize and scale the sensor output. First, we need an analog amplifier to convert and linearize the signal from a non-amplified sensor (This will typically be a relatively high impedance output sensor). We can typically get 11- to 16-bit resolution with this fast and low-cost method. Later, in another article, we will discuss the digital technique which can be more precise, yielding up to 24 bits of resolution at moderate speeds. In the analog arena we can have an operational amplifier (op amp), a difference amplifier (diff amp) or even an instrumentation amplifier (in-amp) as the first stage of conditioning the sensor (see Figures 2, 3, and 4).

When sensing a pressure signal, the bridge resistor values shift and cause a change in differential voltage across the bridge. Let’s see how each amplifier configuration performs with this type of sensor.

In general, a typical op-amp configuration has the closed loop gain set by external feedback resistors connected between the input and output terminals. The input impedance seen looking into the inverting input through the gain resistors will be equal to the input resistor R1 (shown grounded in Figure 2, but if we lifted the ground and looked into that point through R1 we will see an impedance of R1), so typically 1-kΩ to 1-MΩ impedance is seen. If we look into the non-inverting input of the op amp we see 106 to 1012 Ω. The bridge differential voltage signal is not handled too well in an op amp especially with higher bridge impedance (op amps have poor common-mode rejection, since an op amp amplifies the dc, noise and any other common-mode voltages---not good for extracting weak signals buried in the noise).

Figure 2: Op amp in non-inverting mode, this very same high impedance architecture is what is at both inputs of an in-amp, giving it improved high impedance and balanced inputs.

Lo and behold, if we look into both inputs of the in-amp, they are each exactly a non-inverting input of an op amp (see Fig. 4, amplifiers one and two are non-inverting op amps). This gives us the balanced high impedances on both in-amp inputs, perfect for the differential signal coming off the pressure bridge.

The diff amp may have four internal, ratio metrically matched resistors but typically these will not provide very high input impedance thus possibly loading down the bridge outputs (see Figure 3). The diff amp has common-mode rejection in the order of 80 dB due to difficulty in maintaining equal source resistances due to its input resistor configurations. You may well ask, “Since the limitations of the diff amp are input resistance related, can’t we put a buffer amplifier on the inputs to solve these problems?” The answer is, “Yes!” In fact, that’s the whole idea behind the three op amp instrumentation amplifier. Not only will we resolve the diff amp limitations and achieve very high input and balanced impedance which greatly improves the sensor signal loading issue, these input buffer amplifiers can also provide voltage gain3. (See Figure 4, amplifier 3 configuration is a diff amp). 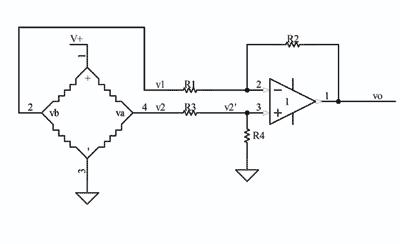 Figure 3: Sensor and difference amplifier configuration, which can load down the bridge outputs and have common-mode degradation.

The in-amp has an internal feedback resistor network setting the gain that is isolated from its signal input terminals with matched high input impedance and low bias currents. The in-amp is most ideal for a differential bridge output and has more than 120 dB common-mode rejection (The amazing feat of computerized resistor laser trimming and matching at the semiconductor level and the work of the internal diff amp). The in-amp will be much more capable of measuring low level bridge voltages and currents without loading down the signal source due to the very high value and closely matched input impedances and relatively low bias currents. In-amps have 109 to 1012 Ω or greater on both balanced inputs (see Figure 4). 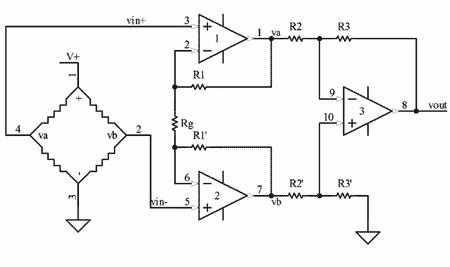 Also, as you might have noticed in the diagrams above, we will need to provide an excitation to the transducer in the form of a voltage. Most transducers such as the 24PC from Honeywell/Microswitch are less sensitive to temperature variations when excited by current excitation (see Figure 5). 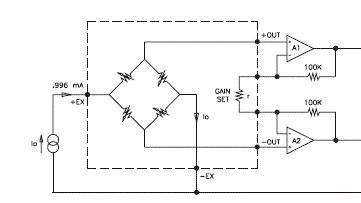 Development kits are excellent for streamlining your designs. They are fully tested layouts that work well with sensors and even include digitizing the analog signals in many cases. These are readily available on Hotenda’s website.

Bosch Sensortech has a great Shuttle Board and Development kit available from Hotenda complete with Microcontroller, GUI and PC software for easy development.

Freescale has a “Sensor Toolbox” as a low cost demo and development hardware platform with GUI, software, plug-and-play for accelerometers, pressure and proximity sensors. There is also a starter kit with all of the previously mentioned sensors.

VTI Technologies has a very wide variety of development boards for accelerometers and inclinometers.

VTI Technologies has their SCP1000 line with ASIC and full digitizing on board with an I²C or SPI serial interfaces which can easily link up to an external microcontroller. Measurement Specialties has the Ultrastable 600 which has a 4-20 mA output that can send the signal longer distances to a Microcontroller via twisted pair.