Sensors and Safety: From the Car to the Playing Field, New Solutions Protect Participants

Sensors - MEMS devices in particular - have gained traction in the last 15 years by demonstrating an ability to increase vehicle efficiency, reduce emissions, and enable a higher level of passenger safety.

Sensors – MEMS devices in particular– have gained traction in the last 15 years by demonstrating an ability to increase vehicle efficiency, reduce emissions, and enable a higher level of passenger safety. Sensors are now used in cars to monitor temperatures, gases, voltages/currents, torque, brake wear, and tire pressure. as well as to enable life-saving devices such as ABS and airbags, to name just two. Going forward, as more advanced controls are designed into automobiles, much of the new functionality will stem from enhanced sensor capabilities.

Inside the car, for example, the latest wave of sensor-based safety systems employs the use of voice and gestures to control activities and functions that remove the distraction of hands-on movements such as turning knobs and pushing buttons or the necessity of the driver taking his or her eyes off the road. With the wave of a hand, a movement of a foot, or the monitoring of eyelids to detect drowsiness in drivers, sensor use is finding its way into applications focused on enhancing safety.

Outside the family car, sensors are moving into real-life activities. While we’re used to sensors being a part of video-based games, they are finding their way into the helmets of football players, ice hockey players, and race car drivers in an attempt to reduce or prevent brain injury.

This article will focus on two rapidly growing uses of sensor systems: providing safety by means of added convenience (in the automotive arena) and added awareness (both in the military and in contact sports). All parts mentioned in the article are available on the Hotenda website.

Hyundai recently indicated that it will soon incorporate 3D gesture control in its vehicles to enable drivers to operate audio systems, air conditioning settings, and displays with a mere wave of the hand. As an added benefit to the car company, not only will 3D gesture controls provide product differentiation, there should also be a very short learning curve, given that most consumers use motion sensors and gesture control to mimic body motions in the video games they already play.

Using state-of-the-art driver eye-tracking and 3D hand-gesture recognition, the HCD-14 Genesis “concept car” can recognize driver commands free from the distractions associated with manual controls. Once a specific feature is selected via eye-tracking, thumb controls or gesture recognition can be used to select navigation, infotainment, audio, HVAC, and even smartphone connectivity functions. This intuitive interface provides the driver with complete control while keeping his or her eyes safely above the dashboard, using a windshield heads-up display (HUD) for minimal driving distraction.

An example of how 3D sensing technology works can be found in the Panasonic D-Imager (Figure 1), which targets gesture- controlled applications. The actual camera output from this technology is shown in Figure 2. The D-Imager operates on the time-of-flight measurement principle. Built-in infrared LEDs emit light that reflects off a target and then is received by a CCD element. The image size is 160 pixels horizontally by 120 pixels vertically and the field of view is 60 degrees horizontal by 44 degrees vertical. 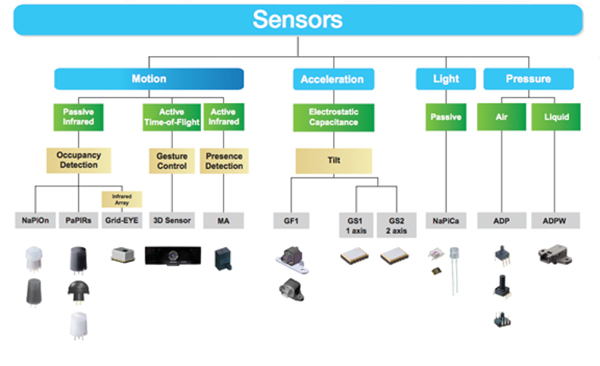 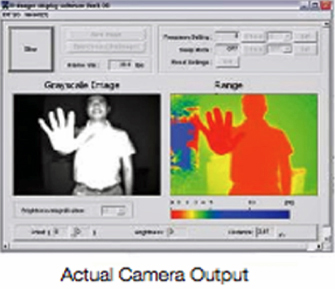 Panasonic offers a Product Training Module on its D-Imager on the Hotenda website.

Lexus luxury sedans are now equipped with infrared cameras that map a driver’s face to find signs of distraction or fatigue. Sensors pick up head tilting as well as eye closing. The system works with a radar-based capability that detects objects in the path of the vehicle, and takes over the braking system and the seat belts in order to brace the driver for a crash.

Within this automotive environment, sensors also provide safety indirectly by means of more precise comfort measurements. Take, for example the TMP006 and TMP006B infrared thermopile sensors from Texas Instruments (Figure 3). The temperature sensors measure the temperature of an object without the need to make direct contact. The sensor uses a thermopile to absorb infrared energy and uses the change in thermopile voltage to determine the object temperature. The device can be used for comfort index measurement as well as motor case temperature.

Soldiers involved in blast events are often unaware they may have sustained a concussion and frequently continue on with their mission rather than seek medical attention. Several manufacturers have come up with sensor-based systems to better ensure that the blast-injured soldier gets the proper medical care. For example, a Diversified Technical Systems (DTS) product called HEADS comprises a data recorder and sensors inside the soldiers’ helmet. These devices remain dormant until the helmet is subjected to a blow. At that time, acceleration is measured and results downloaded for study as to what happened at impact.

The HEADS sensors are designed to record only data exceeding a predetermined threshold – what might occur with a roadside bomb, for example. Once that threshold is reached, a visual LED display on the sensor is triggered, alerting the soldier of a potential head injury. The data within the sensor is easily downloaded via a USB device or summary data through a wireless connection. This is an extremely valuable solution for data download. Antennas can readily scan all available HEADS sensors in a Forward Operating Base and send the data to a computer, identifying any soldier who may have been involved in a blast or explosion, triggering the sensor.

Impact-sensing military helmets have also been revamped for sports use, especially given the lack of accurate diagnosis of concussions, which are particularly dangerous when undiagnosed, often the case in contact sports such as football and ice hockey. In one of the numerous studies done on the impact of head trauma in contact sports¹, instrumented helmets contained six single axis microelectromechanical system (MEMS) accelerometers from Analog Devices, along with data acquisition electronics, 128 Kbytes of memory capable of storing data for up to 100 impacts, and an RF transceiver.

These experiments led Ottawa, Ontario, Canada startup Shockbox to the development by of a helmet sensor designed to detect head injuries and send alerts when medical attention is required. The flexible rubber device, which works with Android, iOS, and Blackberry smartphones, can fit inside any helmet with space between the padding the exterior; besides football, it can be used in such contact sports as hockey, lacrosse, skiing, snowboarding, mountain biking, and other extreme sports.

Here’s how it works: If the player has been hit too hard, the sensor will send a color-coded alert to a mobile device via Bluetooth; an orange alert will be sent for hits over 50 G, and a red alert is sent for hits over 90 G. A free app interprets the Shockbox data.

A popular accelerometer for use in sports ad health devices is the ADXL335 three-axis accelerometer from Analog Devices (Figure 4). The ADXL335 is a small, thin, low power, complete three-axis accelerometer with signal conditioned voltage outputs. The product measures acceleration with a minimum full-scale range of ±3 g and can measure the static acceleration of gravity in tilt-sensing applications, as well as dynamic acceleration resulting from motion, shock, or vibration. The user selects the bandwidth of the accelerometer to suit the application with a range of 0.5 to 1,600 Hz for the x and y-axes, and a range of 0.5 to 550 Hz for the z axis. The ADXL335 is available in a small, low-profile, 4 × 4 × 1.45 mm, 16-lead, plastic lead-frame chip-scale package (LFCSP_LQ). 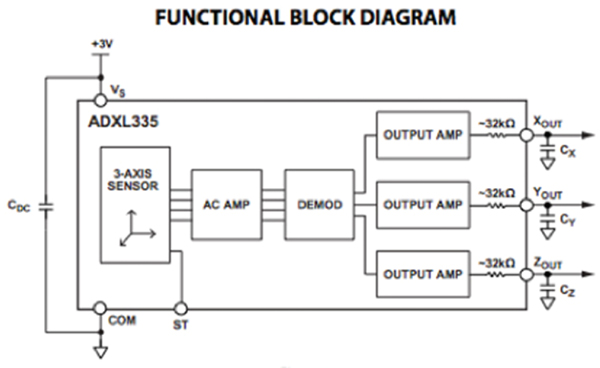 Sensor technology has dominated the automotive industry and has also driven the success of both the Nintendo Wii and Apple iPhone. Taking advantage of the arrival of combination sensors, sensor fusion techniques and new MEMS devices, future sensor development efforts both inside and outside the automotive realm are increasingly being focused on safety related systems.

So the next time you climb into your car or your son (or daughter) runs out onto the battlefield or the gridiron, consider that (1) sensor technology is generating new, previously unavailable data and (2) that data will not only improve and fine-tune various life experiences but may possibly also prove to be life-saving.