Wearable steady progress from fitness monitoring into demanding tasks such as industrial and defense applications.

In the past, many have scoffed at the strange, almost alien look of Google Glasses and the fad-like nature of wristband fitness gadgets. The possibility that wearables could take on important roles in factory/industrial settings was considered unlikely. However, as wearables continue to make steady progress from fitness monitoring into increasingly more serious and demanding tasks, the advantages and benefits of this technology have become clearer for such applications as warehouse and field services, where almost all of the employees are wearing safety glasses anyway so to add a wearable computer should not upset traditional working practices.

As a result, wearable technology revenue potential now is expected to grow impressively not only for general consumer applications but also for the industrial segment. A recent Allied Markets research report broke down top industry segments by percentages to include lifestyle and fitness at 38 percent of the overall market, with industrial and defense at a healthy 22 percent of overall wearable applications.

If it is to become a multi-tasking enabler, wearable-computing technology requires a constant and smooth interaction between humans and machines. It must allow users to perform tasks while executing commands simultaneously and it has to be functional in situations where tasks must be performed at a distance from traditional desktop computing. In the field, for example, sensors can accurately measure, assess, and report on distance and safety. And, given the very nature of various sensors, they can prevent industrial accidents involving dangerous particulate inhalation or potential electrocution. In a field-service, maintenance, and trouble-shooting role, wearables can be used to deliver information on installed equipment and diagnose problems, eliminating the need for service engineers to go on calls that end up being trivial “fixes.”

Field and warehouse employees will be among the early adopters for wearable technologies aimed at increasing productivity and safety while reducing employee errors. Recently, Vuzix Corporation, a supplier of video eyewear and smart glasses products in the consumer, commercial, and entertainment markets, announced that SAP has released two new augmented reality applications for Vuzix’ M100 Smart Glasses; the  SAP AR Warehouse Picker, and the SAP AR Service Technician, both of which offer a hands-free working experience.

As its name suggests, the SAP AR Warehouse Picker is designed for the warehouse picker, allowing hands-free mobility using visualization and voice recognition to receive instructions via the M100 Smart Glasses to complete daily tasks without a handheld scanning device. Functions include barcode scanning for handling units, locations, products, stations, and any other required scans, as well as voice input for quantity confirmation. With secure authentication on the user’s SAP System through QR-Code identity scans, the user experience is enhanced through the elimination of the need to enter a username, password, or login code.

Similarly, the SAP Service Technician application allows the field-service technician to have access to 3D-Visual-Enterprise models of their workplace with instructions anywhere in a hands-free experience, allowing them to perform the necessary operations. The application features voice recognition and enables the use of an expert calling feature which allows a remote expert to give directions to a colleague while seeing what the field technician is seeing through their M100 Smart Glasses or Head Mounted Display.

Among the many drivers behind the recent appreciation of wearables for industrial use include ongoing and substantial size and cost reduction in sensors, the successful integration of sensors into work-a-day apps, the evolving use of mobile technology in industrial settings, and a technology push by such giants as Google, Apple, and Microsoft to work with top sensor manufacturers such as InvenSense, Analog Devices, Bosch Sensortec, STMicroelectronics, Texas Instruments, and Freescale Semiconductor. 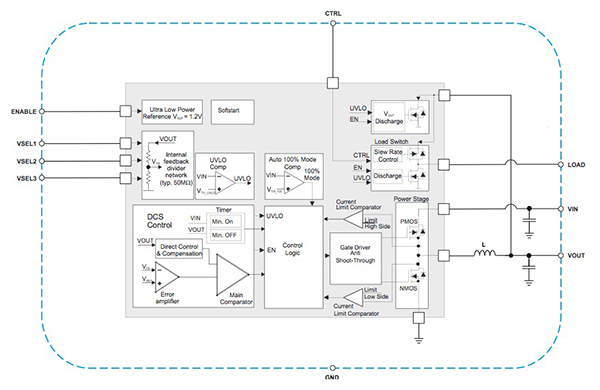 The tiny modules rely on a fully integrated, 9-bump MicroSiP package that is 75 percent smaller than discrete solutions, even while incorporating a switching regulator, inductor, and input/output capacitors. It comes in at a solution size of only 6.7 mm2.

Head-mounted displays (HMDs) are becoming more streamlined and ergonomically appropriate compared to the bulky ones that were available in the recent past. They are also getting closer to the price point necessary for widespread adoption. Next-generation OLED micro displays and retinal displays are expected to spur adoption as they solve a myriad of uses. Costs have plummeted in video-camera technologies, too, especially in the glasses segment. There are near-eye 2D/3D video see-through displays and video-recording capabilities resident in an eyeglass frame based on gyro and acceleration sensors.

Accompanying these developments are advances in proximity and ambient light sensors (Figure 2) – the latter being a technology that adjusts the brightness of a screen’s backlight according to the surrounding light level to improve the battery life and ease of use of wearables.

Consider, for example, devices such as the 6-pin SMD Panasonic PNJ4K01F ambient light sensor. The device features a built-in photodiode and current amplifier circuit that controls display luminosity depending on ambient brightness and so is ideal for low-power mobile applications.

The PNJ4K01F features wavelength characteristics close to human relative spectral sensitivity, enabling control that is close to human-eye response and optimal human sensitivity. This feature, combined with a small-package size and low-power consumption down to 1.4 V min., makes it ideal for applications in small mobile and wearable electronics applications.

Another part series worth noting is the Silicon Labs Si1141, Si1142, and Si1143 proximity/ambient-light sensors with I2C interface (Figure 3). This is a touchless, low-power, reflectance-based, infrared proximity and ambient-light sensor IC featuring a programmable-event interrupt output and including an analog-to-digital converter, integrated high-sensitivity visible and infrared photodiodes, a digital-signal processor, and one, two, or three integrated infrared LED drivers with fifteen selectable drive levels. 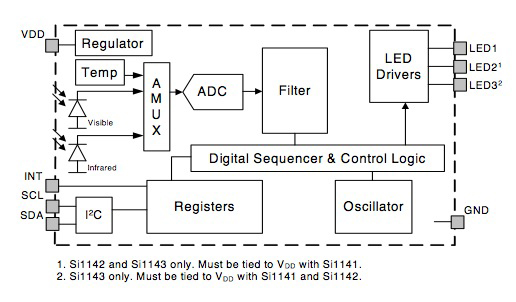 The sensor yields high performance under a wide dynamic range and a variety of light sources, including direct sunlight, but it can also work under dark-glass covers. It supports multiple-axis proximity motion detection and operates from 1.71 to 3.6 V over a –40 to +85°C temperature range.

The photodiode response and associated digital-conversion circuitry provide excellent immunity to artificial-light flicker noise and natural-light flutter noise. With two or more LEDs, the Si1142/43 is capable of supporting multiple-axis proximity motion detection. The Si1141/42/43 devices are provided in a 10-lead 2 x 2 mm QFN package and are capable of operation from 1.71 to 3.6 V over the –40 to +85°C temperature range

While advances are impressive and the use of wearable technology has truly moved from consumer fad to the factory floor, all is not completely rosy. There are still challenges including security, standards development, interoperability, and power issues. Input and sensing devices that are extensions of mobile phones, such as wrist-worn keyboards, are relatively low in cost and can be practical alternatives to stand-alone wearables.

Potential solutions now on the drawing boards may solve these issues and with the high volumes promised by broader use in industrial applications the price tag of factory floor wearables and their associated sensors will come down to where they may no longer inhibit widespread usage in industrial settings.