This article looks at the different types of accelerometers used for industrial applications, ranging from the latest micro-machined capacitive devices to traditional rugged piezo electric crystals.


There are many different types of accelerometers for industrial applications, ranging from the latest micro-machined capacitive devices to traditional rugged piezo electric crystals. The boom in portable devices and the advantages of knowing the position and orientation of the equipment, as well as the increased use of accelerometers in vehicle air bags, has led to an explosion in the different types of devices in recent years. All of this is to the advantage of the engineer who can use the wide range of devices for different applications, from monitoring to position measurement.

There are two basic classes of accelerometer: those with an AC response and those with DC response.

An AC-response accelerometer cannot be used to measure static acceleration such as gravity or constant centrifugal acceleration, only dynamic events, while a DC response device can handle measurements down to zero hertz.

The majority of accelerometers measure the acceleration, but this also provides data on the velocity and position of the equipment by integrating the acceleration curve, and here the AC response devices can struggle as small changes or errors in the measurement can be amplified over time.

There are two types of piezoelectric accelerometers available: those using charge outputs or those using voltage outputs. The charge mode accelerometer, one of the most durable sensors, is linked to a charge amplifier. This gives a wide dynamic range of over 120 dB and a wide temperature range and so is often seen in applications such as monitoring turbine engines.

The other type of AC accelerometer integrates the charge amplifier directly to produce the voltage output on a two or three wire interface. Because the voltage mode device includes an electronic circuit, this limits the operating temperature of the device to the maximum operating temperature of the electronics, usually +125°C. These devices also have their full scale range pre-determined by the internal amplifier at the factory.

Because the piezoresistive sensor output is differential and purely resistive, signal to noise performance is generally outstanding; its dynamic range is limited only by the quality of the DC bridge amplifier. However, the output is generally sensitive to temperature variation and so needs temperature compensation, often through an external ASIC that also handles the signal conditioning.

The bandwidth of these piezoresistive accelerometers can reach upwards of 5000 Hz and for very high g shock measurements. Some piezoresistive designs can handle acceleration levels well above 10,000 g and are used in automotive and military equipment testing.

However, by far the most common accelerometer is the micro-machined capacitive sensor. Different suppliers use a wide range of different micro-structures to provide a capacitive change when the device moves, and the quality and responsiveness of the output depends on the different structures that are used in the sensor. The bandwidth of capacitive accelerometers is mostly limited to a few hundred hertz, mainly from its physical geometry, and these devices typically have a range within 100 g, which is sufficient for many applications.

Zero-g level offset describes the deviation of an actual output signal from the ideal output signal if no acceleration is present. A sensor in a steady state on a horizontal surface will measure 0 g in X-axis and 0 g in Y-axis, whereas the Z-axis will measure 1 g. The output is ideally in the middle of the dynamic range of the sensor, and any deviation from the ideal value is called the Zero-g offset. Offset is to some extent a result of stress to the MEMS sensor and therefore the offset can slightly change after mounting the sensor onto a printed circuit board or exposing it to extensive mechanical stress.

STMicroelectronics is one of the major suppliers of MEMS accelerometers, having dedicated a fab in Italy to the production of the devices. The STEVAL-MKI089V1 is an adapter board designed to facilitate the evaluation of MEMS devices in the LIS331DLH product family. The board offers an effective solution for fast system prototyping and device evaluation directly within the user’s own application, as it can be plugged into a standard dual in-line DIL 24 socket. The adapter provides the complete LIS331DLH pinout and comes ready to use with the required decoupling capacitors on the VDD power supply line. 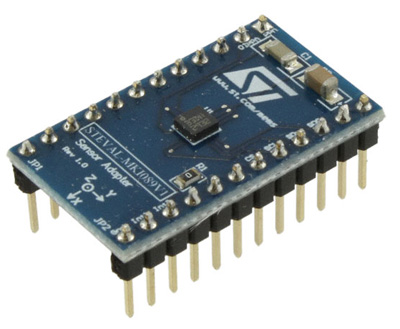 Figure 1: The STEVAL-MKI089V1 MEMs evaluation board in a DIL package.


The pinout of the adapter is fully compatible with all other available adapter boards, making it possible to easily switch from one sensor to another during device evaluation without the need for board redesign.

The LIS331DLH itself is an ultra-low power high-performance three-axis linear accelerometer belonging to the ‘nano’ family, with digital I²C/SPI serial interface standard output. A proprietary process is used to create a surface micro-machined accelerometer where suspended silicon structures are attached to the substrate in a few anchor points, leaving them free to move in the direction of the sensed acceleration. To be compatible with the traditional packaging techniques, a cap is placed on top of the sensing element to avoid blocking the moving parts during the molding phase of the plastic encapsulation.

A “sleep to wake-up” function, in conjunction with low-power mode, allows the system power consumption to be further reduced to open up new smart applications. The LIS331DLH can be set in a low-power operating mode, characterized by lower data rate refreshments. In this way the device, even if sleeping, keeps on sensing acceleration and generating interrupt requests.


When the function is activated, LIS331DLH is able to automatically wake up as soon as the interrupt event has been detected, increasing the output data rate and bandwidth. With this feature, the system may be efficiently switched from low-power mode to full performance depending on user-selectable positioning and acceleration events, ensuring power saving and flexibility.

The LIS331DLH features a Data-Ready signal (RDY), which indicates when a new set of measured acceleration data is available, thus simplifying data synchronization in the digital system that uses the device. It can also be configured to generate an inertial Wake-Up and Free-Fall interrupt signal according to a programmed acceleration event along the enabled axes. Both Free-Fall and Wake-Up can be available simultaneously on two different pins.

Analog Devices is another company that has led the way in developing MEMS accelerometers over many years. Like ST, its background in analog and mixed signal process technology maps very well to both the process for building the MEMS devices and also integrating the electronics alongside to provide a single chip. The ADXL325 is a small, low power, complete 3-axis accelerometer with signal conditioned voltage outputs. The product measures acceleration with a minimum full-scale range of ±5 g and can measure the static acceleration of gravity in tilt-sensing applications, as well as dynamic acceleration, resulting from motion, shock, or vibration. 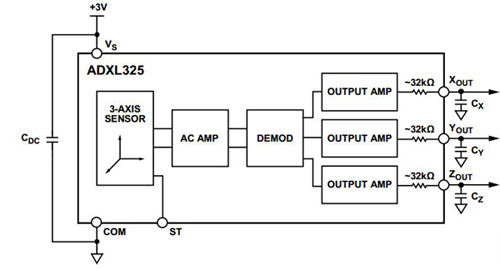 
The sensor is a polysilicon surface micro-machined structure built on top of a silicon wafer. Polysilicon springs suspend the structure over the surface of the wafer and provide a resistance against acceleration forces. Deflection of the structure is measured using a differential capacitor that consists of independent fixed plates and plates attached to the moving mass. The fixed plates are driven by 180° out-of-phase square waves. The acceleration deflects the moving mass and unbalances the differential capacitor resulting in a sensor output whose amplitude is proportional to acceleration.

Phase-sensitive demodulation techniques are then used to determine the magnitude and direction of the acceleration, and this output is amplified and brought off-chip through a 32 kΩ resistor. The user then sets the signal bandwidth of the device by adding a capacitor. This filtering improves measurement resolution and helps prevent aliasing.

The sensor uses this polysilicon surface micro-machined structure and signal conditioning circuitry to implement an open loop acceleration measurement architecture. The output signals are analog voltages that are proportional to acceleration. The accelerometer can measure the static acceleration of gravity in tilt-sensing applications, as well as dynamic acceleration, resulting from motion, shock, or vibration.

Rather than using additional temperature compensation circuitry, innovative design techniques ensure that high performance is built-in to the ADXL325. As a result, there is no quantization error and the temperature hysteresis is very low (typically <3 mg over the −25°C to +70°C temperature range).

Bosch in Germany has been a leading supplier of MEMS accelerometers for automotive systems and this expertise has been opened up for the rest of the industrial market. The BMA220 is a triaxial, low-g differential capacitance-based accelerometer with digital outputs for the consumer market. It includes an ASIC that handles the output conversion and also includes an interrupt controller so that different control modes can be used without having to have a microcontroller. This allows designers the ability to add control features or gestures such as tapping or shaking the unit without adding complexity and cost to the system. It can handle a variable voltage input from 1.6 V to 3.6 V to cover a range of portable designs.

The Kionix KXTC9-2050 is a three-axis, silicon micro-machined accelerometer with a full-scale output range of +/-2 g (19.6 m/s/s) built with a plasma etching process rather than the more traditional chemical etching.

The acceleration sensing is based on the principle of a differential capacitance arising from acceleration-induced motion of the sense element, which uses common mode cancellation to decrease errors from process variation, temperature, and environmental stress. The sense element is hermetically sealed at the wafer level by bonding a second silicon lid wafer to the device using a glass frit. A separate ASIC device is packaged with the sense element to provide signal conditioning and self-test.

Despite the many different designs of MEMS sensors there are other options. Piezoelectric crystals can be used for low cost accelerometers in asset monitoring, data loggers, impact monitoring, machine health monitoring, system wake-up switches and other embedded applications in aerospace and military segments, engine and vehicle designs, medical systems and consumer equipment.

The Model 832 from Measurement Specialties is a low-cost board-mountable triaxial accelerometer. Featuring stable piezo-ceramic crystals, the accelerometer incorporates full power and signal conditioning with a maximum current consumption of 4 μA. The model 832 is available in ±25 g to ±500 g ranges and provides a flat frequency response up to 2 kHz, while the 832M1 provides an extended frequency range to 6 kHz. 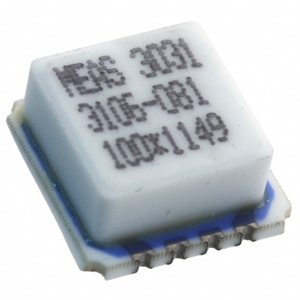 The wide range of capacitive MEMS accelerometers provides the engineer with a highly flexible design space. Being able to monitor the movement of equipment – whether fixed or portable – provides valuable data and can be used to protect sensitive electronics in the event that a unit is jarred or dropped. The integration of additional features such as wake-on-signal allows the sensor to be used in the lowest power modes in portable equipment. But they are not the only options, and piezo sensors – both charge and resistive and with triaxial capabilities – can have a key role to play in system monitoring. Moving from single- to three-axis capability is bringing the piezo technology into more applications just as improvements in process technology and the integrated electronics is enhancing the use of MEMS devices in more applications.