Even well before the onset of autonomous vehicles there is no doubt that advanced automotive applications are taking motoring out of the hands of the driver—especially when sensor-based systems determine that a high-speed collision is imminent.  One area in particular where automotive manufacturers are increasingly trying to mitigate potentially fatal crashes is with automatic-braking systems.

Studies show that nearly half of all drivers do not step on the brake quickly and strongly enough to stop the vehicle in case of an emergency.  As a result, automatic braking combines advanced driver-assist systems and Electronic Stability Control (ESC) to slow the vehicle and reduce the severity of an impact when a collision is unavoidable.  Automatic braking works with or without driver intervention by combining data from forward-looking radar and video systems to provide a complete, accurate, and real-time image of the road ahead.  When this data suggests an impact will be forthcoming and if a driver’s steering and braking intervention is not enough to avoid a collision, brake pressure is applied automatically providing maximum brake boost immediately once the driver does engage the brakes. This final action is realized as full ABS braking, and it ensures maximum speed reduction.

Recently in the news1 is a new “crash-proof car” that’s in the works at BMW. The car features Active Assist, a braking system that allows the vehicle to get within a certain range of another vehicle, and then takes over the braking for the driver automatically.  Using laser sensors, the system effectively scans 360-degrees around the vehicle and will automatically and gently brake before a vehicle hits any stationary object.

It works in a manner not unlike cruise-control systems that automatically slow down a vehicle when you close too fast on the car in front: sensors in the BMW test car keep track of walls, columns, and other stationary objects, constantly maintaining and updating a digital map of the surrounding area. The company has demonstrated that if you drive its Active Assist car full throttle at a wall, the system will stop the vehicle inches away from impact without the driver touching the brakes.

BMW now is working on expanding the system to include moving objects, a more difficult task because the algorithms involved must not only show where a pedestrian or car is, but where they will be.

BMW is far from alone. Toyota also just announced expanded availability of its automated braking technology and will provide lower-cost versions of their existing Lexus and SUV models to offer these braking features by the end of 2017. Toyota’s Brake Assist (Figure 1 shows reaction and braking time with and without this feature) detects attempted panic braking based on the force that is applied to the brake pedal and how fast the driver is stepping on the pedal. When the system recognizes sudden braking, it will add additional pressure to the brake. When your foot is released during Brake Assist, braking power lessens and regulates the brakes with ease. 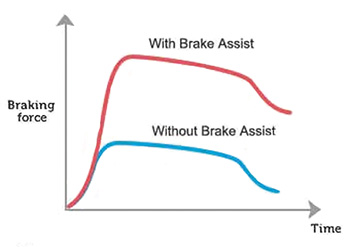 As with most technology, as use goes up, price comes down—expectations are that the system price will drop from a current $2,000 or more on high-end vehicles to between $300 and $650 for the lower-cost version.

Similarly, Mercedes Brake Assist technology senses emergency braking using the speed at which the driver presses the brake pedal and immediately applies maximum available power boost. It can reduce the stopping distance by eliminating the human tendency not to brake hard enough and soon enough. In addition to automated braking, Mercedes’ PRE-SAFE system employs a network of sensors (many of them already serving other safety systems in the vehicle) to detect certain conditions that suggest an accident is about to occur, such as extreme skidding. It then tightens the front seat belts, adjusts the front head restraints and passenger seat, and can even close the windows and sunroof, all to better prepare the occupants for more effective results from the restraint systems.

Currently, most front-crash-prevention systems are available as part of an optional package, but the good news is that availability is growing in the standard equipment category. According to the Highway Loss Data Institute2, more than 20 percent of 2014 models in their vehicle-features database offer a front-crash-prevention system with automatic braking capabilities, doubling the availability just two years earlier. Forward-collision warning is offered as an option on nearly 40 percent of 2014 models and more than 51 percent of 2015 models offer forward-collision warning as standard or optional features, but just 27 percent are combining it with auto-braking.

The technology received a boost when the United Nations Economic Commission for Europe 3 (UNECE) ruled that these systems were mandatory for new heavy vehicles beginning this year.

While many braking technologies exist, they all rely on a form of sensor input. Sensor input from lasers, radar, or video data determines the presence of objects in the vehicle’s path. An essential factor is the speed difference of the vehicle compared with the speed of the object to be avoided. When the speed differential is great, collision is more certain, and these systems will automatically activate the brakes.

The Infineon Technologies TLE4921-5U differential Hall-Effect sensor (Figure 2), for example, provides high sensitivity and superior stability and is particularly suitable for rotational speed detection and timing applications of ferromagnetic-toothed wheels such as anti-lock braking systems. The IC provides a digital-signal output with frequency proportional to the speed of rotation. 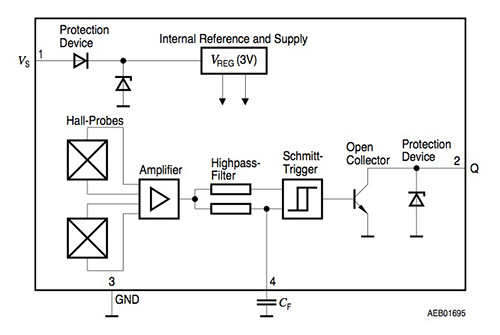 As previously noted, adaptive-cruise-control systems are also beginning to make use of automatic braking. These systems are capable of measuring the speed of a leading vehicle and matching it. They can also reduce speed by cutting the throttle, downshifting, and finally, activating the brakes.

Emergency-braking systems can also be activated with a tire blowout, whereby braking pressure is transferred from a hydraulic power supply to each wheel cylinder. Utilizing the vehicle’s yaw-rate signal, the controller of the emergency-automatic-braking system judges the operational conditions and adjusts the pressure amplitude in each wheel cylinder. In this case, a sensor such as the Analog Devices ADXRS620 yaw rate gyroscope can be used (Figure 3). 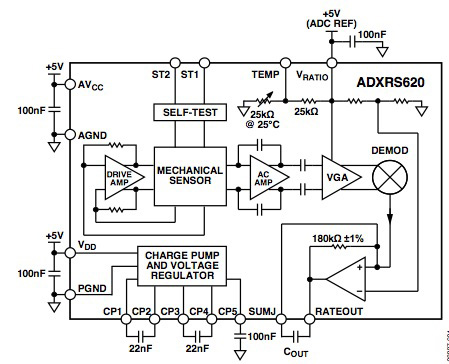 Figure 3: The Analog Devices ADXRS620 specifically addresses automatic braking when a tire blowout occurs—a necessity, especially for what will be a driverless future. (Courtesy of Analog Devices)

The ADXRS620 is an automotive-grade gyroscope that is 100 percent pin, package, temperature, and function compatible to the company’s industrial-grade ADXRS652 gyro. The output signal, RATEOUT, is a voltage that is proportional to angular rate about the axis normal to the top surface of the package. The output is ratiometric, with respect to a provided reference supply. An external capacitor sets the bandwidth. Other external capacitors are required for operation. A temperature output is provided for compensation techniques. Two digital self-test inputs electromechanically excite the sensor to test proper operation of both the sensor and the signal-conditioning circuits. Applications include inertial measurement units for automotive use.

Of course, there are many sensors and sensor types that can be combined to deliver automatic-braking systems. For example, the Analog Devices ADIS16364 inertial system includes a tri-axial gyroscope and tri-axial accelerometer. Each sensor has its own dynamic-compensation formulas that provide accurate sensor measurements. Used in platform stabilization and control and navigation applications, all necessary motion testing and calibration are part of the production process at the factory, reducing system integration time. Tight orthogonal alignment simplifies inertial frame alignment in navigation systems. The SPI and register structures provide a simple interface for data collection and configuration control. This compact module is approximately 23 mm × 23 mm × 23 mm and provides a flexible connector interface that enables multiple mounting-orientation options.

In summary, new technology is being integrated into systems that have been in vehicles for some time. Most automakers currently offer adaptive cruise control or a collision-avoidance system on select models and it’s just a short time before they will be ubiquitous, joining a myriad of technologies designed to save lives by either assisting drivers, or taking the wheel out of the hands of humans completely.