The basics of linear and switching power supplies, along with their benefits, are discussed with emphasis on Semtech products.

In the most basic terms, a step-down regulator takes an input voltage and converts it to a lower voltage required by the load. There are two major types of voltage regulators, linear and switching. A linear regulator works by absorbing the energy difference between the input and the output while a switching regulator chops the input voltage and then averages the chopped voltage to provide the proper output voltage.

A voltage regulator which is placed close to the device or devices for which it is powering is commonly referred to as a point of load regulator. This type of regulator often receives its input from a voltage bus contained on the PCB.

There are several parameters that should be considered when evaluating power supplies for particular applications.

Additionally, as illustrated in Figure 1, several other specifications associated with power supplies affect their operation. 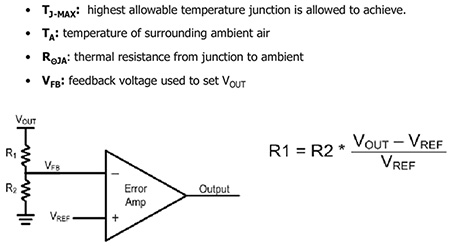 Linear regulators are often used because of their ease of use and typically have a very low component count requirement. This type of regulator is equivalent to an adjustable resistor which drops VIN to VOUT and tries to keep VOUT constant. The following is a list of key parameters to look for in a linear regulator: 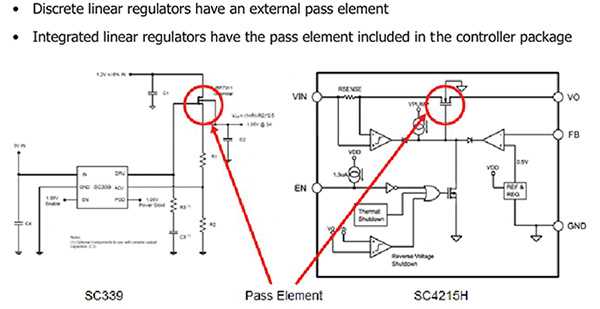 In the example shown in Figure 3, the VIN has been defined to be 3.3 V and VOUT has been defined as 2.5 V. We begin by selecting R2 to be 10 kΩ. From the equation for calculating R1 and using the value of 0.5 V for VREF from the datasheet, we come up with a value of 40 kΩ needed for R1. We have defined the TAMBIENT to be 50°C. From the datasheet, we find the value for TJ-MAX defined as 125°C and RTHETA-JA defined as 36°C/Watt. With those values, we can calculate the maximum available output current, which is 2.6 A. 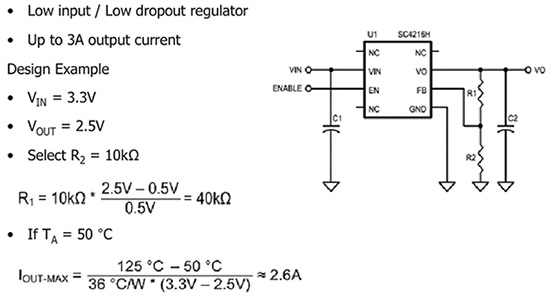 The datasheet states 10 μF per Amp of output current is needed to prevent the input to the regulator from sagging. To support the full current calculated on the previous slide, a minimum of 26 μF is needed. Due to capacitor tolerances, a minimum of 33 μF capacitor should be chosen. In addition to the bulk cap, a 4.7 μF ceramic is recommended to be placed directly next to the VIN pin of the regulator. For the output, the same rule of 10 μF per amp of output current is recommended. This will lead to the same value of 33 μF being used for the output. It is important to watch the ESR of the output capacitor to ensure the regions of instability are not entered.  While a graph is not given for a 33 μF capacitor, we can interpolate between the two graphs given and use a 5 mΩ ESR to maintain stability. It is also recommended to use a 0.1 μF capacitor next to the VOUT pin.

A buck regulator converts a higher VIN to a lower VOUT as shown in Figure 4. The controller opens and closes switch S periodically to connect the phase node between VIN and ground. The waveform seen at the phase node is then filtered through the inductor and capacitor to provide a smooth voltage to the load. 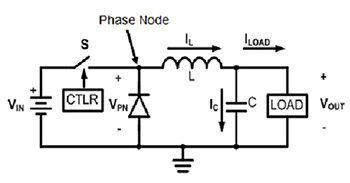 As mentioned previously, the diode becomes forward biased with the collapsing of the magnetic field of the inductor. This occurs without any reference to a clock and is known as an asynchronous regulator. The VF of the diode used represents a significant portion of losses within an asynchronous regulator, especially as the value of VF approaches the value of VOUT. By replacing the diode with another MOSFET, the losses in the system can be reduced. This requires a more complex controller to ensure the MOSFETs are not both turned on at the same time. Since the bottom MOSFET is now controlled, the topology is referred to as a synchronous regulator. S1 is also known as the top FET or the high-side FET. S2 is also known as the bottom FET or the low-side FET. The comparison between the Asynchronous and Synchronous Buck Regulators is shown in Figure 6.

The signal at VPHASE is then filtered to form VOUT. 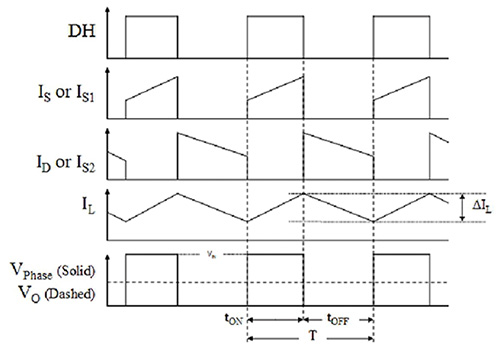 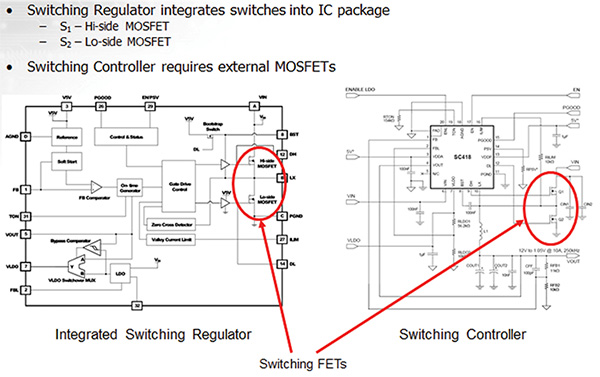 Voltages other than the fixed options provided can be used so long as a feedback network is added to design. It is recommended to use the 1 V SC189 when requiring voltages other than the standard fixed voltages. Due to the internal compensation, the use of a capacitor across the top side of the feedback network is necessary to maintain stability.  The equation for calculating the capacitor was already discussed. VOUT is the desired output voltage and VOSTD is the voltage of SC189 with no feedback network. The feedback resistors are calculated via the formula found on Figure 9. The VREF to be used in the equation is the VOSTD of the part or 1 V when the recommended SC189A is used.