Semiconductor Sales May Be Stronger Than Expected in 2011

Sales revenue in the first quarter for the top 20 semiconductor suppliers grew 11 percent compared to the first quarter of 2011, which could mean that the industry may have another strong year of double-digit sales growth.

Revenue of the top 20 semiconductor companies totaled $54.7 billion, up from $49.4 billion in the first quarter of 2010, according to researcher IC Insights, based in Scottsdale, Ariz.

In its annual forecast, the SIA reported that semiconductor sales would grow six percent in 2011 after growing nearly 32 percent to $298 billion in 2010. Chip industry market researchers had similar forecasts.

However, the better-than-expected sales of semiconductors in the first quarter could mean that chip suppliers will have another year of double-digit growth.

There were several reasons for strong sales in the first quarter, according to Brian Matas, vice president of market research at IC Insights.

"The above-average growth, especially among the top 20 suppliers, can partly be attributed to the quake in Japan," Matas said. There was some panic buying by purchasers at OEMs and electronics manufacturing services providers following the March 11 earthquake.

"Some of the growth was due to the Chinese New Year, some of it to business PC sales, and some was just steady consumer demand, particularly for tablet PCs and smartphones," noted Matas. 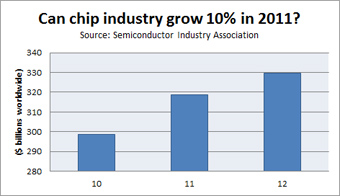 "First quarter growth was 0.4 percent compared to the fourth quarter," said Matas. "While that doesn't sound great, the average first quarter growth over the past 28 years has been -1.2 percent, so the industry was actually a little ahead of average."

Matas added that the strong first growth was significant for another reason. Over the past 28 years, there have been 14 years in which first quarter growth was positive compared to the fourth quarter of the previous year.

"In 13 of those 14 years, the full-year sales gain for the IC market was at least 11 percent. If long-term industry trends are any indication, we're likely in for a double-digit year of growth," Matas said. IC insights had earlier forecast 10 percent growth for the industry in 2011.

Toshiba grew its revenue 10 percent to $3.55 billion and was the third largest chipmaker in the first quarter. In 2010, Toshiba was the fifth ranked semiconductor company based on annual sales.