Semiconductor Market Will Grow 2.6 Percent in 2012 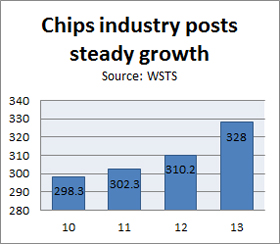 The semiconductor industry will post single-digit growth for the next two years.The global semiconductor market will end 2011 growing 1.3 percent to $302.3 billion and chip revenue will rise 2.6 percent in 2012 to $310.2 billion, according to the annual forecast of World Semiconductor Trade Statistics (WSTS).

The WSTS forecast, endorsed by the Semiconductor Industry Association (SIA), indicated that revenue will grow another 5.8 percent in 2013 as the total semiconductor market surpasses $328 billion.

The SIA reported that semiconductor revenue in 2011 will pass the $300 billion mark the first time in industry history.

The combination of record-breaking sales in 2010 coupled with this year’s forecast topping $300 billion for the first time is “welcome news for both the semiconductor industry and the entire economy,” said Brian Toohey, SIA president.

“Despite a challenging global economic environment this year and the natural disasters that have impacted production in Asia, the semiconductor industry has demonstrated impressive resilience,” Toohey noted.

He added that the growing level of semiconductor content in a wide range of consumer, industrial, business and government applications points to continued growth in 2012 and 2013.

The decline in memory sales is due to oversupply and overall sluggish demand, caused in part by a slowdown in DRAM bit growth in computers.