The increase in chip stockpiles help the industry cope with the disruption of semiconductor production caused by the earthquake in Japan.

Days of inventory (DOI) among semiconductor suppliers increased 1.1 percent in the first quarter from the fourth quarter of last year, which helped reduce the severity of parts shortages caused by the March 11 earthquake in Japan, according to researcher IHS iSuppli. 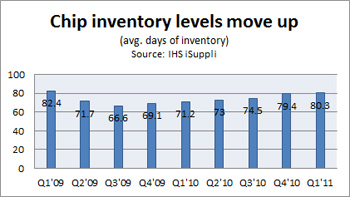 "Efforts by suppliers to build inventory during the seasonally slow period from the fourth quarter of 2010 through the first quarter of 2011 proved to be fortuitous," said Sharon Stiefel, analyst for semiconductor market intelligence at IHS iSuppli. The efforts resulted in a two- to-four-week cushion of raw materials, work-in-process goods and finished products.

High semiconductor inventory levels usually result in falling prices and reduce profits. However, first quarter high inventory levels this year proved to be a positive development, as it helped the industry contend with production disruption of chips and other materials right after the quake.

Stiefel went on to say that many fabs damaged or shut down because of lack of electricity have returned to Rome operations. In cases where damage to fabs was severe, chipmakers have transferred production to other company fabs and to foundries.

Inventory levels at semiconductor suppliers are expected to continue to rise in the second quarter, according to IHS iSuppli. Chipmakers are preparing for increased demand in the second and third quarters, not necessarily because of concern about shortages. However, because of the quake, some chipmakers are reconsidering their inventory policies concerning just-in-time deliveries.