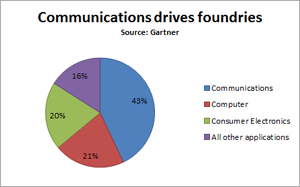 Strong sales of media tablets and mobile phones prevented a slide in semiconductor demand and foundry revenue, noted Samuel Tuan Wang, research director at Gartner. Compared to 2010 when foundry revenue grew 40.5 percent from 2009, the foundry market in 2011 was "relatively flat.”

Wang also said the growth rate for foundry business slowed in 2011 because of weak PC demand and a reduction of inventory at OEMs that started mid-2011. Oversupply was also a factor in slower revenue growth for foundries in 2011.

“Given the aggressive capital spending by large foundries during 2010 and 2011, the oversupply of foundry capacity was inevitable," said Wang. With oversupply, foundry utilization rates declined from 91 percent in 2010 to 81 percent in 2011.

The semiconductor foundry business in 2011 was dominated by the top five foundry players including TSMC, UMC, GlobalFoundries, SMIC, and TowerJazz. Those five companies accounted for 80 percent of global foundry revenue, Gartner reported.

TSMC, the largest foundry, grew its revenue 9 percent to $13.3 billion. UMC's sales declined 5.8 percent, but with $3.6 billion in revenue, the company maintained its number two position in foundry sales.

By region, the Americas generated 62.8 percent of foundry revenue; Asia-Pacific, 22.2 percent; Europe, 10 percent; and Japan, 4.9 percent, according to Gartner.