Semiconductor suppliers will spend more than $41 billion on fab equipment this year.

Spending by semiconductor companies on fab equipment will increase 23 percent to a record $41.1 billion, which should result in more chip capacity, according to trade association SEMI.

SEMI said while equipment shipments were strong in the first quarter, they declined about 1 percent in the second to $11.9 billion. New orders for semiconductor equipment decreased 3 percent to $10.76 billion in the second quarter compared to the first.

“The poor economy is definitely having an impact on planned capital expenditures,” said Matas. He noted that chipmakers were investing in new equipment earlier in the year, but then “uncertainty over the US economy and the debt ceiling crisis made companies sit back and wait to see what would happen.” He added while the debt ceiling crisis has passed, many companies still are not confident that the economy will grow and have scaled back capital spending. 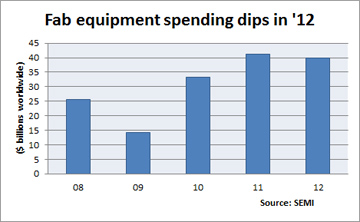 While semiconductor equipment spending increased to a record $41 billion in 2011, it will dip about 3 percent in 2012.Chipmakers may be also impacted by consumers who are also reducing their spending.

“Slower PC sales, and consequently less DRAM demand from the computer segment, have cut into spending plans among DRAM makers,” said Matas. He added that foundries “had big plans to expand at the beginning of this year,” but those plans were scaled back as foundries determined they had plenty of capacity to meet current demand.

The overall economic slowdown will impact semiconductor capital limit spending in 2012, as well as equipment spending, resulting in a decline of 3 percent to $40 billion, reported SEMI.

The association conducted a study and counted the spending for semiconductor equipment at 223 facilities. Of these projects, 77 were for light emitting diode facilities.

The highest spending for equipment in 2011 will occur in the Americas, as about $10 billion of equipment will be purchased through the year. Intel, based in Santa Clara, Calif., will have about $10.1 billion in capital expenditures this year and about 75 percent of that will be for equipment, according to IC Insights. In addition, Samsung is spending about $2.5 to $3 billion at its Austin, Texas fab.

Chipmakers is Taiwan will spend the second most on fab equipment purchasing about $9 billion of equipment in 2011, reported SEMI.

SEMI noted that it takes about 1.5 years from the time construction of a fab begins to when it reaches volume production.

SEMI is the global industry association serving the manufacturing supply chains for the microelectronic, display, and photovoltaic industries.