Chipmakers are ordering less equipment because of weaker demand for semiconductors. 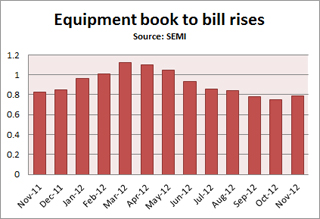 The chip equipment book-to-bill ratio for November was 0.79, up from 0.75 in October. A ratio of 0.79 means semiconductor equipment manufacturers received $79 in new orders for every $100 of equipment they shipped in the month.

A poor economy, high semiconductor inventory levels and sluggish computer sales are “tempering chip makers’ investment in additional manufacturing capacity,” said Denny McGuirk, president and CEO of SEMI. “Softening in the market for new semiconductor manufacturing equipment has persisted through the second half of 2012 and the November equipment billings are at a three-year low,” he said.