Equipment manufacturers received more orders for equipment than they did in February. 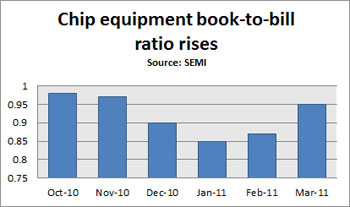 For the third consecutive month, the semiconductor equipment book to bill ratio increased.The three-month average of worldwide billings in March 2011 was $1.70 billion, about 7.6 percent less than the final February 2011 level of $1.84 billion, reported SEMI. However, the March billings figure was 54.4 percent more than the March 2010 billings level of $1.10 billion.

"Orders are over 20 percent higher than one year ago and we see industry investments remaining steady," said Stanley T. Myers, president and CEO of SEMI.