Selecting the Right Voltage Converter Is Not Just About Peak Efficiency

Switching DC/DC voltage converters are popular because they provide efficient power conversion that can exceed 90 percent.


Switching DC/DC voltage converters are popular because they provide efficient power conversion that can exceed 90 percent. That is an advantage both when input power is at a premium and when it is difficult to get the heat out (common challenges for engineers designing compact portable products).

With key power component manufacturers offering products that appear virtually identical on the specification sheet, it is tempting for an engineer to just pick a switching converter with the highest peak efficiency from a shortlist that meets their product’s general requirements. However, that would be a mistake because apparently identical converters can offer markedly different performance.

This article considers the major implications for power dissipation and associated heat rise that just a few percentage points difference in efficiency can make. The article then leads on to discuss how, depending on the load pattern, a converter with lower peak efficiency, but a flatter efficiency curve, could well be the better choice for a particular application.

Beware of the power loss

Efficient voltage converters are topical in electronics design circles because of the pressure on designers to minimize power consumption. For the designer of a battery-powered device, the challenge is obvious: maximizing battery life while providing good functionality. Less obvious, but still a major concern, is the requirement for designers of mains-powered equipment to meet various national and international regulations that mandate minimum supply efficiency.

The good news is that, due to increasingly clever design and the high performance of the switching and magnetic components of modern converters (see the TechZone article “The Inductor’s Role in Completing a Power Module-Based Solution”), it is not difficult to locate a converter that offers a peak efficiency of 85 to 95 percent. That is a considerable improvement over the linear regulators of yesteryear that could only deliver perhaps 60 percent of the input power to their output terminals (although contemporary low-dropout (LDO) products perform much better – see the TechZone article “Understanding the Advantages and Disadvantages of Linear Regulators”).

With impressive performance from a wide range of power supplies from multiple silicon vendors, it seems churlish to quibble over a few percentage points of efficiency. However, while specifying a less expensive converter with slightly lower efficiency may look like a good decision, the purchase price is only part of the cost-of-ownership. While the manufacturer does not have to cover these running costs, a product that eats batteries at an alarming rate is hardly going to enhance the maker’s reputation in the eyes of the customer.

To illustrate just how important a few percentage points of efficiency can be, consider two voltage converters with efficiencies of 90 percent and 85 percent, respectively.

The formula for the efficiency of a voltage converter is:

The power loss of the voltage converter is:

The power loss for this device is:

Compare this with an identical voltage converter under the same operating conditions but with an efficiency of 85 percent:

A small difference in efficiency between two otherwise similar voltage converters adds up to a significant additional power loss. While it may seem that just 5 percent difference will have negligible effect on performance, the reality is very different. The less efficient converter will constantly require more input power to maintain the same output as the alternative device. Over time, that constant additional current adds up to a lot of expensive energy. Tens of milliwatts of power loss can result in more than a few degrees Celsius (Figure 1) of temperature rise. Heat is the biggest killer of silicon chips, and an increase of just 10oC can potentially halve the mean time between failures (MTBF). 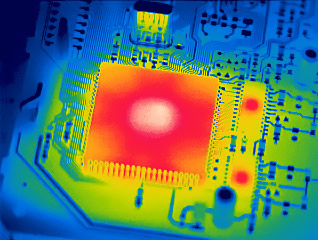 
So it would seem that a good point to start in the switching DC/DC voltage converter selection process is to shortlist devices with the highest efficiency that can be afforded within the bill-of-materials (BOM). But this is far from the complete story.

The efficiency curve for a switching voltage converter is not flat, rather it tails off markedly at low- and high-loads. Figure 2 shows how the typical efficiency curve of a switching converter can be generally divided into three regions. (A previous TechZone article “Techniques to Limit Switching DC/DC Converter Inefficiency During Low Loads” explains the reasons why efficiency varies across the load range.) 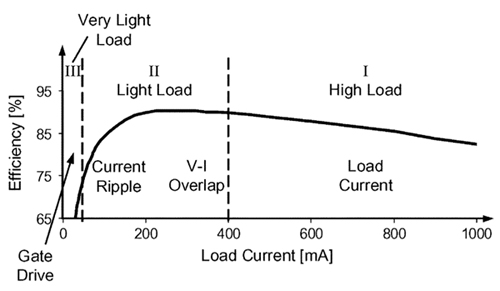 
Because switching DC/DC converters are all manufactured using similar topologies, Metal Oxide Semiconductor Field Effect Transistors (MOSFET) for the switching operation and compact magnetics for energy storage, the efficiency curve for most modern devices has a similar shape.

Reputable power chip vendors provide efficiency vs. load graphs for their products at varying input- and output-voltages. Silicon Point-of-Load (PoL) voltage converters usually have an efficiency “sweet spot” at around 50 to 70 percent of their full current rating.

For example, Fig. 3 shows the load current vs. efficiency graph for Fairchild Semiconductor’s FAN4860 step-up (‘boost’) switching DC/DC voltage converter. The device is a 3 MHz synchronous chip that can operate from an input voltage of 2.3 to 4.5 V and deliver a fixed output of either 3.3 or 5 V. Maximum load current (VIN = 3.3 V, VOUT = 5 V) is 300 mA. From Fig. 3, it can be seen that the optimum load for this chip under these operating conditions is around 200 mA, where efficiency peaks at around 88 percent. With the input voltage boosted to 4.5 V, the efficiency rises to around 94 percent. 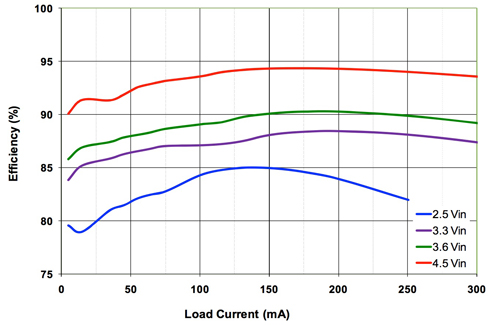 The example described above would be a good solution for a product demanding a constant 200 mA at 5 V. However, in practice, products very rarely run at constant load. When selecting a voltage regulator, it is important the designer examine how the product’s power demands change the point-of-operation on the load curve.

Consider the following comparison. Figure 4 shows the efficiency curve for an ON Semiconductor NCP1421 1.2 MHz boost voltage converter capable of delivering up to 600 mA (VIN = 2.5 V, VOUT =3.3 V). Similarly, Fig. 5 illustrates the efficiency curves for a Linear Technology LTC3526 1 MHz boost voltage converter, which is capable of providing 550 mA from a 2.4 V input and up to 5.25 V output. (In this case, the output voltage is also 3.3 V.) 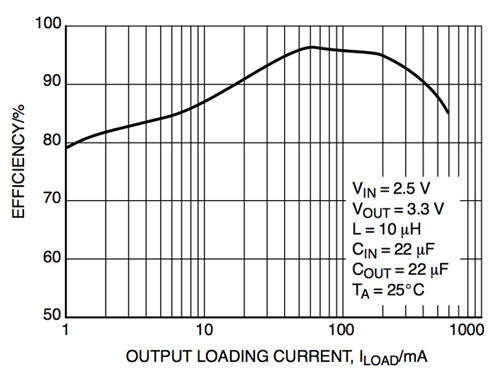 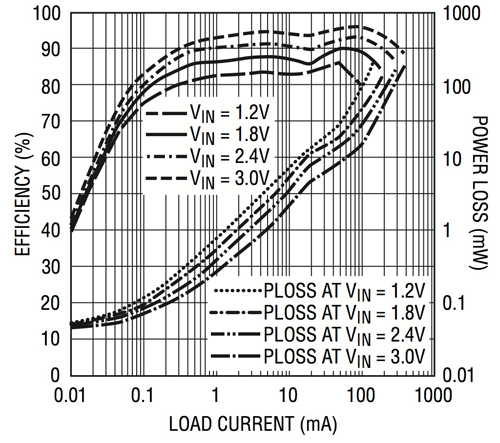 
Let us assume that the designer wants to choose the best voltage converter for an application that requires a 3.3 V output using a 2.4 to 2.5 V input. The ON Semiconductor device offers a peak efficiency of 95 percent (at a load of 60 mA) under these operating conditions, with the Linear Technology chip peaking at 93 percent (at a load of 90 mA). The former would appear to be the best choice for an application drawing a constant 60 mA, but for a product demanding a variable load things are less clear-cut. For example, under a 10 mA load the LTC3526 operates at over 90 percent efficiency while the NCP1421 has dropped to 87 percent. Yet under high loads, for example, 300 mA, the NCP1421 is operating at 92 percent efficiency while the LTC3526 is working at 87 percent efficiency.

The correct choice of voltage regulator for this application would depend on the end product’s load pattern. For a product spending much of its time under high loads (above 70 mA), the LTC3526 would be the best option, as it is more efficient in this operating region. However, if the duty cycle determines that the application will spend lot of time under low load (below 20 mA), then the NCP1421 would probably be the better choice.

Portable equipment designers in particular should pay close attention to the voltage converter’s performance at low loads because many battery-powered devices spend a lot of time in standby or sleep modes to save power when not in use. At these low currents, a switching converter is relatively inefficient and can negate some of the power savings the designer was hoping to achieve by switching the product to a low-power mode when not in use.

Determining the application’s load pattern in typical usage is particularly important when the budget is tight because a product with higher peak efficiency is usually more expensive. But if the voltage converter rarely or never operates near its peak efficiency, then the extra cost could be money down the drain.

For similar reasons, the designer should not be tempted to over-specify the voltage converter with the intention of gaining greater efficiency. For example, if the designer requires a converter that can deliver 500 mA, it is sensible to look for a device that can manage up to 700 mA to provide some safety margin. The designer might be tempted to select a 1 W voltage converter, based on the assumption that it can meet the specification but provide even greater safety margin. However, the product’s operating loads would cause the higher-rated voltage converter to function in the lower regions of its efficiency curve where the performance tails off. Not only would the engineer have paid more for the voltage converter, but he would have also saddled the consumer with an inferior end product.

There is an ever-increasing range of switching converters suitable for PoL applications. While this eases supply and brings down costs, such a wide choice can make it confusing when trying to select the best device for a particular application. It is sensible to aim for the most efficient voltage converter for the application – because this saves power and limits temperature rise – but it is important not to become fixated on peak efficiency. Applications very rarely operate under a constant load, and virtually never at the point that coincides with the peak performance of the power supply.

A better approach is to match the likely operational loads and duty cycle to a shortlist’s efficiency curve. A product with a flatter and wider curve is often a better choice than one that exhibits superior peak efficiency. The former product may well prove to be the best choice because lower peak efficiency is more than made up for by gains at high and low loads.

Moreover, the designer should not be tempted to “over-specify” the voltage regulator in an attempt to add more safety margin. This will increase the initial cost, and the device will likely operate in a region where it has relatively poor efficiency.

Finally, if the application demands only low output currents – an operating region where inductor-based switching voltage converters exhibit relatively poor efficiency – it is worth considering a switched capacitor or “charge pump” device. This is a voltage converter that uses capacitors instead of an inductor as the energy storage component with the result that efficiency is better at low loads. (See the TechZone articles “Charge Pumps Cut Switched Converter Costs” and “Selecting the Correct Regulator for Your Application.”)

For more information on the switching DC/DC voltage converters mentioned in this article, use the links provided to access product pages on the Hotenda website.