Discover how a primary battery can be used to supplement an energy harvesting, energy storage subsystem to create a longer power lifetime for an IoT product.


The Internet of Things (IoT) relies on the use of autonomous, wirelessly connected sensors to relay data about changing environmental conditions at often remote, difficult-to-reach locations. As a result, IoT sensor nodes need to be able to provide their own power over many years.

Although IoT sensor nodes may make use of energy harvesting to provide electrical power, the amounts of energy available are small and often unreliable. The sensor node generally needs some way of storing energy temporarily so that it is ready when a reading has to be taken or a message sent wirelessly. One option is to provide a small rechargeable battery or storage capacitor. However, these storage mechanisms have their own drawbacks that can limit their usefulness: rechargeable batteries wear out after a few hundred charge-discharge cycles and need to be replaced, and supercapacitors will not just change their characteristics over time but will self-discharge rapidly. The self-discharge can be as much as 20 percent per day, causing much of the converted energy to be wasted.

To ensure that power can be supplied over the lifetime of the IoT product, a primary battery may be needed although it could be supplemented by the combination of an energy harvesting and storage subsystem. Through the use of harvesting, it is possible to extend the usable lifetime of the sensor node before its primary battery is exhausted and needs to be replaced or the node itself is disposed.

The power consumption profile of a sensor node tends to follow a model through which the activity of the node is mainly confined to short bursts, typically to take a sensor reading and, if the reading is outside the expected range, send an alert over a wireless link. At all other times, most of the electronics will be in a low-power sleep mode. As a result, the power consumption will be exhibited as a series of pulses, perhaps with different heights and duration depending on how much of the circuitry is active at any one time.

Battery chemistry is a key consideration for the primary power source of an IoT-based system, as this will interact strongly with the mode of use and the overall circuit design. Some chemistries provide long-term energy storage but are adversely affected by large peaks in demand, although this issue can be addressed through the use of supercapacitors to provide a buffer between the primary battery and the circuit’s demands. Other chemistries can provide sudden bursts of energy to help drive longer-distance RF transmissions but which do not provide such a long storage lifetime, thus limiting the useful life of the sensor node. The discharge voltage is also an important consideration – it will fall to be lower than the nominal voltage, something that has to be handled by the circuit design.

For example, a cell may exhibit a nominal output of 1.5 V and dropping below 0.9 V when almost fully discharged. If the circuitry cannot operate below 1 V, then the battery will fail to provide its maximum rated energy as the final reservoir cannot be used. For most chemistries, the falloff is typically more rapid towards the end of the discharge curve such that 90 percent of the energy might usefully be extracted. However, it is important to check the discharge curve as lithium batteries typically hold a higher voltage over time than alkaline. Using a battery with a higher voltage towards the end of its life or assuming that 10 to 20 percent of the capacity may be wasted may present a sensible tradeoff against the loss in efficiency of using a boost converter to make it possible to extract almost all available energy.

Primary battery chemistries separate into two broad classes, those based on lithium and those based on zinc, although subclasses within them can have quite different properties. There are three main types of zinc-based chemistry in production today. Zinc-air batteries will generally be ruled out despite their good energy density of almost 1.7 MJ/kg because of their high self-discharge rate. Typically, cells are good for only a matter of months. As a result, alkaline batteries based on the combination of manganese dioxide and zinc powder provide a more attractive option. The alkaline battery technology is already in widespread use in low duty-cycle applications with similar properties to IoT sensor nodes such as smoke detectors. The nominal voltage of a single cell is 1.5 V, dropping below 0.9 V when close to full discharge. Akaline batteries in a variety of form factors are made by Energizer and Panasonic. 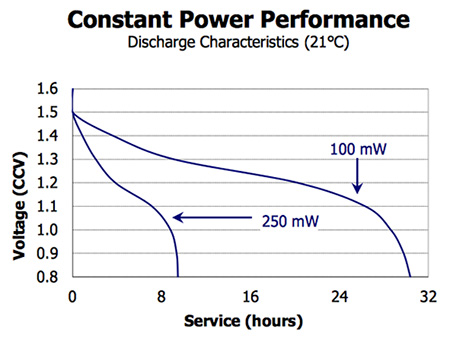 An alternative to alkaline is the older zinc-carbon technology. However, this offers lower performance and is typically only a consideration when cost is the primary challenge as the energy density is a third that of alkaline. As with the alkaline chemistry, zinc-carbon tends to have a low self-discharge rate, allowing use over a period of up to ten years.

A further variant, although potentially costly in larger sizes because of the precious metal it uses, is silver oxide, which is based on an alkaline chemistry that employs silver oxide in the cathode. The self-discharge rate is 5 percent per year, providing a reasonably long storage life. An advantage of the chemistry is its very flat discharge curve and its ability to provide high peak power levels to be drawn without adversely affecting effective capacity. Energy density is typically about 15 percent higher than that of alkaline cells. Energizer provides a variety of silver oxide batteries in button form.

Lithium batteries come in a variety of form-factors, but most commonly in button or coin cell format for use in IoT-type applications. The BR-form cells are typically made from a carbon mono-fluoride gel and a lithium alloy. These offer very-low self-discharge characteristics and, as such, are used in applications requiring very long service intervals with relatively low power requirements such as metering systems. The nominal voltage of this type of cell is 3.0 V dropping below 2.2 V when almost fully discharged. Panasonic offers lithium BR cells with capacities ranging from less than 50 mAh to 500 mAh or more.

The CR form of lithium cell replaces the BR’s cathode with a manganese dioxide material. This material has the advantage of reducing the internal impedance of the battery. This results in the CR cell supplying higher pulse currents than its BR counterpart at the expense of a slightly higher self-discharge rate and lower performance at high temperatures. Lithium CR cells are made in coin and other form-factors that were originally designed for use in portable cameras by suppliers such as Energizer, FDK and Panasonic.

A further variant on the lithium cell is the lithium thionyl chloride chemistry. These cells have been introduced more recently than other lithium chemistries and offer extremely-low self-discharge rates, enabling a battery life of 20 years or more. Manufacturer Tadiran has claimed a lifetime of up to 40 years in some circumstances for high-endurance products. Batteries employing the chemistry benefit from a very flat discharge profile over time so that the terminal voltage stays relatively constant over their entire service life. The nominal voltage of this type of cell is 3.6 V with a fully-discharged voltage of 2.2 V, although this is only encountered at the very end of the cell’s service life. Cells are available in coin/wafer or cylindrical form, with the latter typically providing higher energy density. 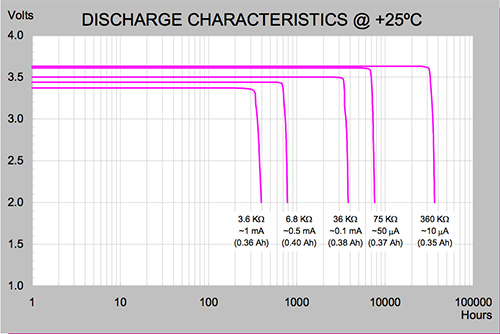 Figure 2: Discharge characteristics of the Tadiran TL-5186, a battery that uses a lithium thionyl chloride composition.

The wide choice of primary batteries available to IoT sensor node developers makes it possible to tune the chemistry to the required properties of lifetime, burst-current capabilities, and cost. As research looks at further enhancement to zinc and lithium-based chemistries, further improvements, particularly in lifetime and self-discharge properties, can be expected.