Selecting and Applying MCUs in Extended- and High-Temperature Applications

Electronic controls are invading mechanical systems in applications ranging from automotive to industrial to military and aerospace.


Electronic controls are invading mechanical systems in applications ranging from automotive to industrial to military and aerospace. The move to electromechanical systems means that microcontrollers (MCUs), the workhorses of electronic systems, must serve in decidedly difficult environments. An examination of select high- and extended-temperature MCU offerings from leading vendors will illustrate the design options available to embedded system developers. Moreover, this article will discuss the separate, but intertwined issues of high-temperature operation and automotive qualification.

First we should define in general what qualifies as extended and high temperatures, and be forewarned that there is little consistency in the industry. A number of IC vendors use the term “high temperature” to describe a product that operates in ambient temperatures as high as 125°C. Other companies call that “extended temperature,” reserving the “high” moniker for 150°C.

IC makers may use the term “automotive grade” to describe a product. That may or may not imply high-temperature capability. Certainly automotive applications in the engine compartment require electronics with a tolerance for high temperatures. But automotive-grade or automotive-qualified ICs are generally those that have been tested to the AEC-Q100 set of standards.

The AEC-Q100 qualification documents include some items that apply only to specific types of ICs. For example, Q100-005 is specifically focused on the endurance of nonvolatile memory in terms of write/erase cycles. Clearly that document would apply to a flash-based MCU, but not too many other ICs. Other Q100 documents apply broadly such as the Q100-001 shear test for wire bonds. Other specific documents address tolerance to electrostatic discharge, solder-ball shear, and many other potential failure modes.

Still, IC makers can have a component tested to AEC-Q100 at lower temperature ranges while offering high-temperature components that are not qualified to AEC-Q100. Let's consider Texas Instruments (TI) and the company's widely used 16-bit MSP430 MCU family that is targeted at low-power applications.

Figure 1 depicts a typical product in the MSP430F20x branch of the family. As you can see, the MCUs integrate a typical peripheral set including an eight-channel, 10-bit A/D converter. And the CPU operates at 16 MHz. 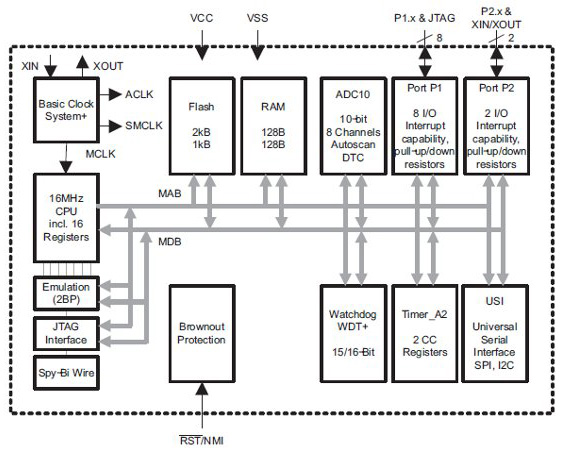 TI offers the MSP430F20x MCUs specified for operation at a maximum of 85° or 105° C. TI recently announced, however, that it is qualifying quite a long list of MSP430F2x and MSP430G2x MCUs to AEC-Q100. Still, that qualification will only be to the 105°C temperature level identified in AEC-Q100 as Grade 2. That means that you won't find the MCUs in the engine compartment. But the MCUs will be used in cabin applications ranging from lighting control to HVAC control to remote keyless entry systems.

Before we move on from the subject of AEC-Q100, you may find that specifying qualified parts is a good way to go even if you are not working in the automotive space, but your application needs high reliability and tolerance for a challenging environment. For example, qualified components are tolerant of vibration. Moreover, other industries are beginning to rely on the automotive-centric standard rather than developing their own requirements from scratch. We will also continue to discuss automotive applications through the remainder of this article because it serves as a perfect canvas to illustrate high-temperature issues.

Getting back to TI, the company has two other MCU families in which it offers high-temperature support. The TMS570 MCU family is rated for operation at 125°C and specifically targets automotive and transportations applications where safety is also a critical concern. Indeed the TMS570 integrates dual cores based on ARM's Cortex-R4F architecture (Figure 2). The cores can operate in what's called “lock-step mode,” where both cores perform identical operations in parallel and results are compared in real time to detect any faults. The MCU would be a good choice in any application with requirements for high temperature and mission-critical safety. 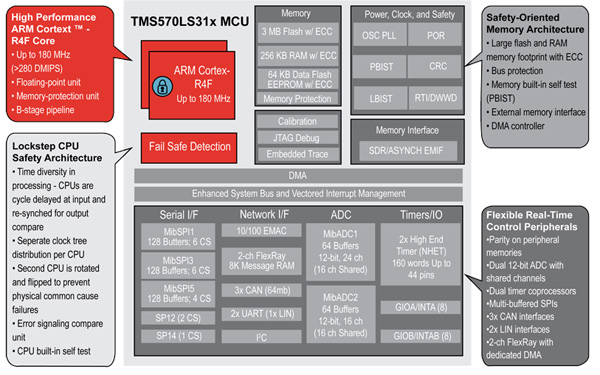 There is also a broad array of industrial applications where extended temperature support is a requirement. Examples include motor control and industrial drive control. TI targets those applications with the TMS320F282x fixed-point MCUs and the TMS320F280x Piccolo MCUs, both of which are rated to 125°C. These products are part of the company's DSP-oriented product line and are sometimes called digital signal controllers (DSCs).

At this point, it is fair to ask why you need to go beyond 125°C. And the answer is a complicated one.

Dan Termer, vice president of vertical markets at Microchip Technology, used the Arizona desert, where his company is based, to explain why support for 150°C is important. Termer described a scenario of an auto driving up the local South Mountain on a summer day. While the car is operating, there are generally cooling systems in place to control the maximum ambient temperature. Even MCUs mounted in a fuel or oil pump, or on the exhaust manifold might not rise above the 125°C level while the car is running.

But consider what happens when you park and kill the engine. Temperatures in the engine compartment will escalate to higher levels than normal operating conditions with cooling systems off. When the engine is first restarted, the MCU may be operating in an environment well above typical until the cooling systems stabilize the temperature.

Termer said that it was customer demand that drove Microchip to support 150°C operation over a fairly broad set of products. Indeed there are 8-bit PIC12 and PIC16 MCUs readily available from stock that are rated to 150°C and qualified to AEC-Q100 at that temperature — called Grade 0 qualification. Figure 3 depicts the PIC12F615 MCU that packs an extensive feature set into an 8-pin package including 1.75 Kbytes of flash, multiple timers, and a four-channel, 10-bit A/D converter. 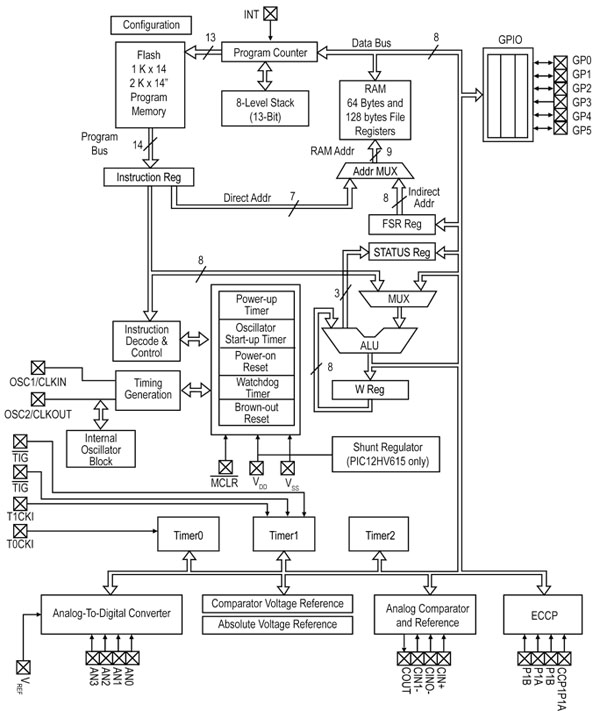 Figure 3: Microchip offers both 150°C support and qualification to AEC-Q100 Grade 0 in a number of its MCUs, including the PIC12F615 depicted here.

Back to the high-temperature end of the spectrum. It was a complicated process to develop 150°C support, according to Microchip’s Termer. He said that while customers asked for such parts, "we didn't have the data." He also said that the company had to first go through a lengthy characterization process.

Supporting 150°C requires qualifying the manufacturing process and specifically the ICs that will be rated for the high temperature. Termer said Microchip runs test structures through the process qualification, but quickly moves to running real MCUs on the process.

There are a number of key concerns about high-temperature operation with MCUs that do not exist for less-complex ICs. Termer said that accurate data retention in flash is an especially difficult problem at high temperature. Likewise, supporting a large number of flash write/erase cycles is tougher at high temperature. A fault in either of those areas would result in absolute system failure.

There are also issues getting some analog peripheral functions to operate correctly at high temperature. The integrated oscillators, for example, are susceptible to temperature. And A/D converters are susceptible as well. In the analog area, however, the failure mode is more likely loss of fidelity than complete failure. Both the chip-design and process-qualification elements must be optimized for reliable high-temperature operation.

Indeed, it is important to ensure that when you evaluate extended- or high-temperature MCUs, you consider a data sheet specific to the higher temperature parts. In some cases, the MCU makers derate certain specification at higher temperatures. If you are working with a low-temperature spec sheet, you may be in for an unpleasant surprise when you test your design at temperature.

Let’s now contemplate the types of applications that might require an MCU to function in the temperature ranges that we have discussed. Bill Hutchings, product marketing manager at Microchip, said that 105°C MCUs are being widely used in renewable-energy applications. For example, power inverters and control-system displays for solar systems must operate over long periods in direct sunlight.

Sangmin Chon, C2000 marketing manager at TI, sees the industrial space as the prime target for 125°C products. Specific applications include power conversion and such temperatures can also be required in big data center applications. Chon also sees the 125°C MCUs serving a big slice of the automotive market where the 125°C-rated, AEC-Q100-qualified products are referred to as Grade 1.

The market segment for 150°C MCUs is admittedly narrow, although with automotive as a key consumer, the market is big in terms of volume. But there are other 150°C applications. Microchip's Termer identified various drilling applications in the oil and gas industry. He said that an MCU is often mounted on the drill bit to capture and preprocess data that is subsequently sent to the surface.

The range of available MCUs rated at 125° and 150°C is most likely broader than you think. So if you have a question about whether temperature could be an issue in a design, don't hesitate to specify a high-temperature MCU; while such products cost a bit more, they are more affordable than you would probably first guess.

Atmel, for example, offers 150°C MCUs in their ATtiny and ATmega families (Figure 4). The products are based on the 8-bit AVR processor architecture. Top clock speed is 16 MHz. You can choose among products with flash memory ranging from 2 to 64 Kbytes. Figure 4 includes a block diagram of the ATmega MCUs. 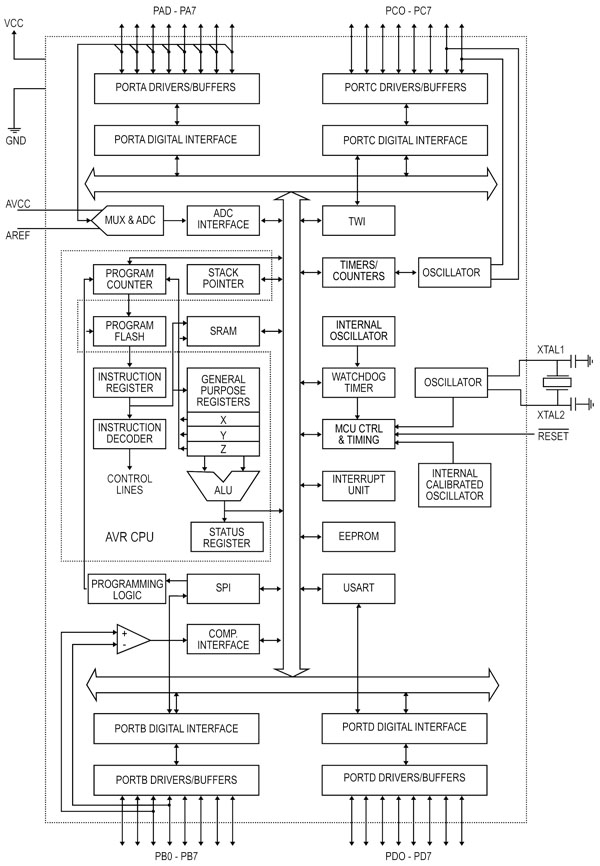 Figure 4: In the 8-bit ATmega and ATtiny MCU families, Atmel offers support for 150°C operation and an AVR CPU core.

The one challenge that you may face in terms of searching for MCUs that can operate at higher temperatures is a generally inconsistent way in which that capability is denoted in the part number. It's usually not simple to go on the IC vendors' websites and search for extended- or high-temperature MCUs, and the inconsistent product numbers don't help.

Your best approach is simply to use the Hotenda website and part-sorting tool as way to see which MCUs are readily available with elevated temperature support. For example, let's consider Freescale, which has a wide selection of MCUs available with 125°C capability. If you use the Hotenda keyword search and enter the terms "Freescale MCU" you get an extremely long list of products. But if you scroll to the right you can select an operating temperature range to 125°C, click the "in stock" box, and then click the "apply filters" button and you will see the product families with readily-available stock.

With high-temperature MCUs available from multiple manufacturers at relatively affordable prices, electronic control will continue to pervade mechanical systems even in the toughest environments. The MCU is the tough part of the equation because of the complexity of the IC, and the MCU makers are solving that problem for the industry. Just ensure that you accurately discern the real maximum temperature at which your product will operate. Don't forget that in some applications, such as our desert automotive example, the problematic temperature rise may come when your system is powered off. But you will most likely find that an MCU architecture with which you are already familiar can handle your high-temperature requirements.