Selecting an RF Connector for your Wireless System

The explosive growth of "wireless" systems has led to a simultaneous expansion in the use of RF connectors and their associated cables.


The explosive growth of "wireless" systems has led to a simultaneous expansion in the use of RF connectors and their associated cables. These assemblies are increasingly vital links between multiple circuit boards, between antennas and front ends, and between power amplifiers (PAs) and antennas. They are instrumental to the operation of such wireless devices and systems as cellular telephones, wireless data networks and advanced radar and electronic-warfare (EW) systems.

Connectors for RF systems have the simple yet critical task of transferring signals from one location to another, with little or no change to the signal (although in reality even with high quality RF cable between the antenna connector and the antenna engineers often factor in a 0.2 dB loss per coaxial connector in addition to the cable attenuation itself).

There are a variety of connectors that are used for RF applications. Among the parameters that determine the best type for a given application are frequency range, Impedance, physical size, power handling, and cost. Recently, long-established connector types, such as the venerable BNC and the SO-239/PL-259, are being supplanted by connectors tuned to the priority characteristics of the latest wireless mass-market designs: smaller, designed only for low power, and providing excellent performance at 1 GHz+. The older connectors are not obsolete: they still are used in test equipment, rack and chassis designs, and installed base/legacy products.

An RF connector is a precision-machined mechanical design and corresponding assembly which is actually quite complex, even if its outward appearance is simple. Consistent performance requires properly calculated dimensions, tight tolerances, quality surface plating/finish, and proper choice of materials.

Connectors have two general physical configurations: one which mounts on the PC board, the other for the mating cable (of course, there are also cable-cable pairings). The board-mounted connector is usually female, while the cable connector is generally male, although there are exceptions: you can purchase female body connectors with male center pins, and male body connectors with female inner sleeve (called reverse polarity connectors); this is an on-going source of user confusion. Nearly all connectors come as male/female gender mating pairs; there are a few hermaphroditic RF-connector styles available, but these are fairly rare in practice.

Key specifications used to assess an RF connector include:

Impedance: Nearly all RF connectors and cables are standardized for 50 Ω impedance. The only widespread exception is the 75 Ω system commonly used for cable TV installations. It is also important that RF coaxial cable connectors have a characteristic impedance that matches that of the cable. If not, a discontinuity is introduced and losses may result.

VSWR (Voltage Standing Wave Ratio): Ideally should be unity, and good designs and implementations can keep VSWR below 1.2 over the range of interest.

Frequency Range: Most RF work is now in the 1-to-10 GHz range, so the connector must have low loss in this region. For situations above 10 GHz – and there is a lot of work going on now in the 10-to-40 GHz range – there are newer connectors among which to choose. They are expensive, as are the cables themselves.

Insertion Loss: This is the connector loss in the frequency range of interest. Loss is typically between 0.1 and 0.3 dB. Given how critical every watt (or fractional watt) is in most designs, even such small losses must be minimized and factored into the link loss budget. It's especially critical in low-noise front ends, where both signal strength and SNR are low.

Mating Cycles: How many connect/disconnect cycles can the connector withstand and still meet its specifications? This is often under 500 or 1000 cycles. For threaded connectors, the vendor-specified tightening torque is a critical factor in maintaining performance and reliability.

Power Handling: Power handling is determined by both resistive loss (heating) and dielectric breakdown. Although designs of even a few decades ago predominantly handled tens of watts and more, today's design world focuses on low-power devices such as handsets, picocells and femtocells, video interfaces, and RF gadgets. These are in the sub-1W range, so connectors can be much smaller and their power rating is less of a constraint.

RF connectors come in a bewildering array of types, with no consistency or pattern to their nomenclature. Most are informally standardized in the industry and available from multiple sources, but there are a few that are vendor-proprietary, such as those with extra ruggedness or special locking retention.

In addition to the BNC and SO-239/PL-259, there are many other choices. The following are just a few of the many available connector types. Most were developed in the 1960s and have a meaningful track record.

A Type F connector, such as the Emerson 25-7034 (Fig. 1), is standard for cable TV installations and is one of the highest-volume, lowest-cost connectors. It is available in both threaded and push-on versions. However, its performance (1 to 2 GHz) is just "adequate" in many ways. Therefore, it is rarely used outside of this market niche. Due to its 75 Ω impedance, it is not compatible with many RF signal paths, which are matched to 50 Ω. 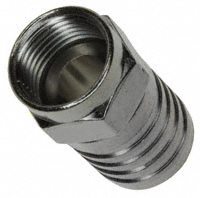 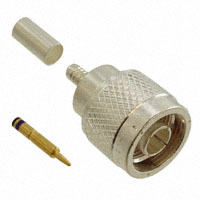 Type TNC, such as the TE Connectivity 228179-3 (Fig. 3), is a threaded version of the BNC connector. Like the Type N, it is designed for DC to approximately 11 GHz. 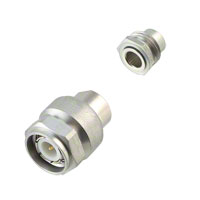 Figure 3: TE Connectivity's Type TNC is similar to the long-established BNC, but has a threaded fitting rather than a bayonet.

SMA (subminiature version A) connectors such as the Amphenol 132255-12 (Fig. 4) use a screw-thread connection with a 1/4"-36 thread and PTFE dielectric. Standard versions are rated to 18 GHz. Variations of the SMA connector include the 3.5 mm connector (34 GHz), and the 2.92 mm version (46 GHz). They have the same outside thread as the SMA, but use an air dielectric. Some versions can be cross-mated, and some cannot. While convenient, this is an area of confusion and can lead to potential problems and even damage. 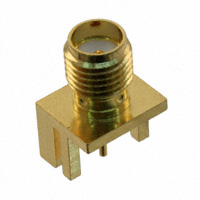 Figure 4: The SMA connector (here, a jack from Amphenol) extends frequency to 18 GHz, and comes in several variations with subtle differences.

The TE Connectivity 5414338-1 is a good example of the SMB (subminiature version B) type. Smaller than SMA, it has a snap-on coupling. Most versions are rated to 4 GHz, and impedance can be 50 Ω or 75 Ω. The SMB is offered for two coaxial cable sizes: 3 mm outer/1.7 mm inner diameter and 2.2 mm outer/1 mm inner diameter.

PCB mount connectors require little or no special handling, as they are soldered directly to the lands on the board. With a few exceptions you should not plan to make your own RF-cable assembly, as properly stripping a coaxial cable and joining it to the connector requires special fixtures and skills. Any deviation from near perfect will undoubtedly yield a cable with key parameters out of specification. Instead, purchase pre-built cables with chosen connectors in the lengths needed from a reliable specialty vendor who verifies and certifies key performance.

Note that even though connectors with the same designation should be mechanically interchangeable, their electrical specifications will vary from vendor to vendor, as will their quality and finish. For this reason, it is important to specify not only the connector type on the bill of materials, but also approved vendors and their model number for that connector. Even a slight shift in a critical parameter may adversely affect the performance of your design.

Be sure the vendor can provide Spice models and Smith charts so you can factor the connector performance details into your design simulation. Even slight perturbations and anomalies in connector parameters can cause a circuit to behave in unexpected and often undesirable ways. The vendor should also have CAD files of the connector's mechanical design (Fig. 5), so you can incorporate those parameters into your PC board layout as needed (copper lands, mounting holes, overall clearance, and height). 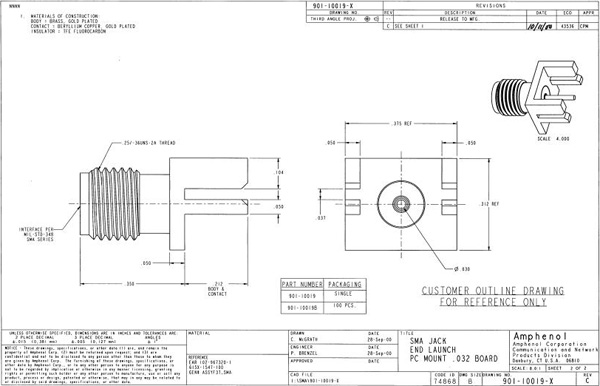 Figure 5: The mechanical drawing, along with its CAD-file equivalent, is vital for proper PC board placement, layout, and clearance of connectors. This is for the SMA jack of Figure 4.

Connectors and associated cables often don’t get the attention they deserve except perhaps in the RF world where they are critical (albeit passive) components in the signal and interconnect chain. This article has reviewed key RF connector parameters, as well as provided a selection of connector types well-suited to today's compact, low-power, 1 to 10 GHz applications. For more information on the products mentioned here, use the links provided to access product pages on the Hotenda website.