MCU manufacturers, such as Texas Instruments and Renesas, have built in numerous features which often can detect and respond to device failure.


In medical and military applications in particular, data security and the continued safe operation of the device are critically important. MCU manufacturers have built-in numerous features which, if used properly, often can detect and respond to device failure, as well as the presence of unauthorized code. This article will examine some of the hardware security features used by leading semiconductor vendors and their strategies for detecting and responding to abnormalities. 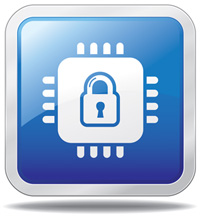 A secure system is basically one that cannot be copied, corrupted, or taken over by unauthorized parties. While this is usually thought of as a firewall or software problem, MCU manufacturers are increasingly building-in hardware safeguards that can help you prevent, detect, or at worst recover from attacks on your embedded system. Three aspects to security need to be considered in embedded designs: Secure startup

Virtually all MCUs at least check their operating integrity when first initialized or when recovering from a low-voltage condition. These checks occur during a power-on reset (POR) or brownout reset (BOR), though resets may also be triggered by access violations during normal operation. Some MCUs may do further system checks when starting up.

Texas Instruments’ MSP430 MCUs were one of the first to go for the ultra-low-power mantle. While not designed for heavily networked applications, the MSP430G2230IDR contains dedicated security features. The MSP430’s Flash-memory controller reports an access violation in response to any erroneous attempts to write to Flash. In addition, any write to an FCTLx register with any value other than 0A5h in the upper byte is reported as a security key violation. The same holds true for the Watchdog Timer. When the MSP430 is first powered up, or when VCC comes back up after a brownout event, a Power-On Reset (POR) signal is generated, which in turn generates a Power-Up Clear (PUC) signal. If the PUC results from a POR then the chip starts to initialize normally, activating the CPU and peripherals. However, if the PUC signal is generated by the Watchdog Timer or Flash-memory controller reporting a security key violation (Fig. 1), then the device is held in the reset state until the issue is addressed. 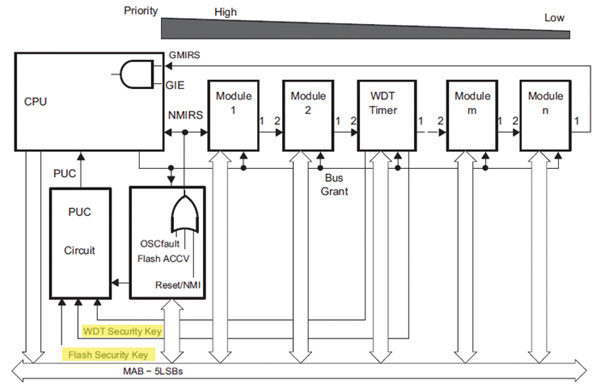 Detecting attempts to tamper with the Watchdog Timer or the contents of Flash memory is key toward preventing the takeover of an embedded system, or at least heading off data corruption. However, it is also possible to simply prevent attackers from gaining access to your boot code in the first place. The MSP430 contains a security fuse that protects code programmed into Flash memory.

If third parties cannot read or write to the embedded Flash memory on an MCU, they are effectively prevented from tampering with the device. The Renesas RX631 provides multiple protection settings to prevent access to on-chip Flash memory by third parties (Fig. 2). They provide three types of protection: The various protection functions are enabled by assigning a control code, an ID code, or a ROM code. The control code and ID code are assigned to 0xFFFFFFA0 and the ROM code to 0xFFFFFF9C. ID authentication is performed when a connection is attempted; if authentication fails the connection is not allowed, preventing reading, programming, or erasing the on-chip Flash memory. 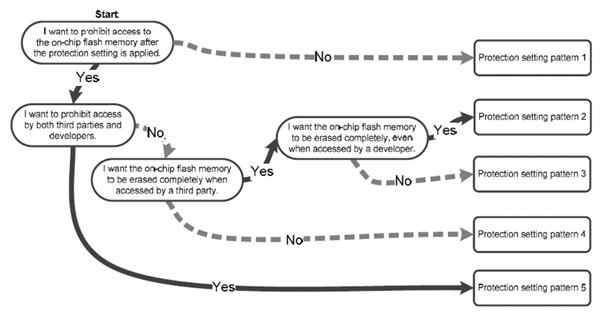 
Embedded developers need to develop a strategy to detect code that attempts to write to unallocated portions of memory. One approach involves filling in blank memory with undefined instructions. When illegal code attempts to access this memory it would then generate an Undefined Instruction Interrupt, alerting the CPU to take corrective action.

A high percentage of MCUs are based on ARM cores, which provide various hardware security features upon which chip vendors can build.

Larger MCUs may use the ARM® Cortex™-A-series processors, which include TrustZone security extensions. The TrustZone hardware architecture (Fig. 3) partitions both hardware and software resources so that they exist in two domains: the so-called Secure World for sensitive resources and the Normal World for all others. The two worlds communicate via the TrustZone-enabled AMBA3-AXI bus fabric, which creates a strong perimeter boundary between the two domains, ensuring that no Secure World resources can be accessed by the Normal World components. 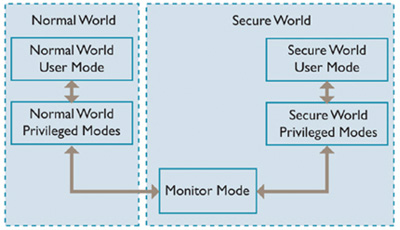 
The TrustZone architecture enables a single core to run two virtual processors, one in each domain, via a context switch called Monitor Mode, access to which is tightly controlled to ensure the security of both domains. You can run a separate, secure operating system in the Secure World or just place a synchronous library of code there. It is also possible to implement a secure kernel that can run multiple, simultaneous Secure World applications, independent of what is happening in the Normal World.

Cortex-M4 processors (Fig. 4) are the largest of the M-series line. For security, they provide an optional 8-region MPU. If access is made to an area of memory without the required permissions, a permission fault is raised, triggering a non-maskable interrupt (NMI) that initiates protective action by the RTOS or application code. The MPU is especially helpful for applications where some critical or certified code has to be protected against the misbehavior of other tasks. 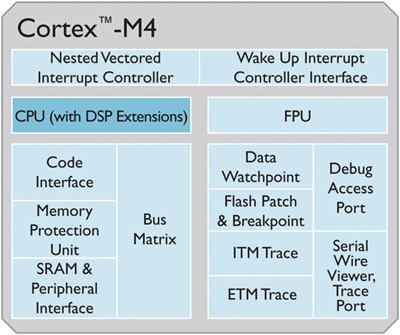 
In addition to an MPU, STMicroelectronics’ Cortex-M4-based STM32F2 MCU features a CRC calculation unit to verify data transmission or storage integrity. The CRC calculation unit helps compute a software signature during runtime, to be compared with a reference signature generated at link-time and stored at a given memory location.

Silicon Labs’ Cortex-M3-based SiM3C167 Precision32 MCUs have a register lock-and-key mechanism that prevents any undesired accesses of the peripherals from firmware (Fig. 5). A key sequence must be written in order for the KEY register to modify any of the bits in PERIPHLOCKx. Any subsequent write to KEY will then inhibit any accesses of PERIPHLOCKx until it is unlocked again through KEY. If a peripheral’s registers are locked, all writes will be ignored. The registers can always be read, regardless of the peripheral’s lock state. The Product Training Module “Precision32 ARM Cortex-M3 MCU Introduction” provides more insight into the product. 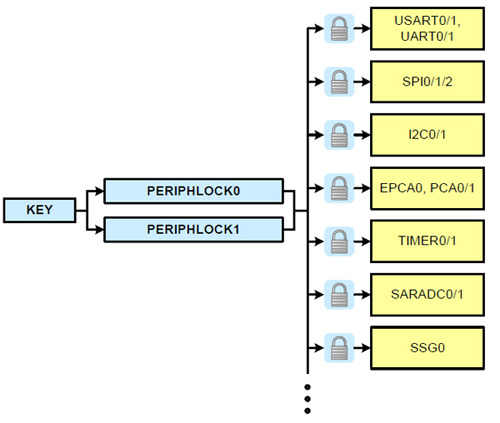 NXP’s LPC4350 includes a Cortex-M4 processor and a Cortex-M0 coprocessor on a single chip. While the tiny Cortex-M0 is lacking in security features, the larger core takes up the slack. In addition to the MPU, the LPC4350 offers hardware to protect stored data content and to accelerate processing for data decryption, data integrity, and proof of origin. Its AES engine supports 128-bit ECB/CBC decode and CMAC hash calculation.

Device security is both a software and hardware problem, though one made easier by the presence of various MCU safety features. Taking advantage of them can result in safe operation in otherwise risky environments. For more information on the products discussed in this article, use the links provided to access product pages on the Hotenda website.