Surface acoustic wave (SAW) filters offer an optimal combination of performance, cost, and size and are used in a variety of wireless applications.

Filters have always been an essential component in the RF signal path. In the past, engineers had to become skilled in the complexities of filter-design theory and practice in order to create real filters based on discrete components. However, for today’s wireless devices and applications, the required filter specifications are increasingly difficult to meet using this approach as the RF spectrum gets more crowded and is sliced into smaller slivers, while operating frequencies increase well beyond the GHz threshold. The reality is that filters using discrete components cannot meet the performance, consistency (due to parasitics), size, and cost needs of many of today’s RF products.

Fortunately, monolithic-like devices such as surface acoustic wave (SAW) filters were developed over the last decades, and these provide the needed functions and features. With SAW filters, engineers are primarily concerned with selection of the filter as a single complete entity, instead of filter design. SAW filters offer a favorable combination of performance, size and cost, and are used extensively in applications embodying Wi-Fi, LTE, GSM, Bluetooth, and many other wireless standards.

A multiband smartphone can have ten or more SAW filters, fulfilling many roles: wideband, narrowband, passband, low pass, and high pass, at both the system-level, as well as in highly localized sub-circuits (Figure 1). As a result, the filter-related activity of engineers has shifted from working through a complex design and associated test/debug to, instead, the selection of a suitable, available filter (which is a good thing, to most engineers). 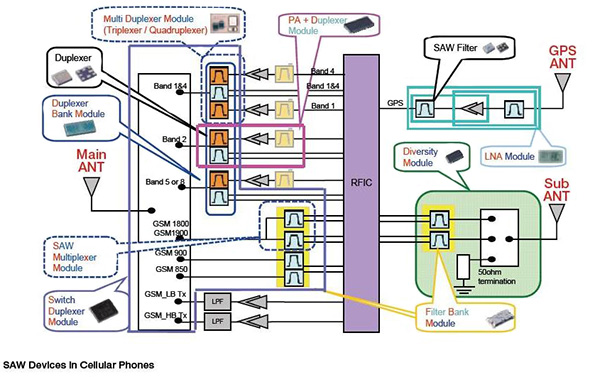 Figure 1: SAW filters are used in quantity in wireless devices, for front-end filtering, narrow multiband filtering, and eliminating specific interference sources; they can be narrow or wide, with band-pass, low-pass, and high-pass FIR characteristics. (Courtesy of Taiyo Yuden)

A SAW device transforms the electronic RF-signal energy to mechanical energy in the acoustic domain. The filter is based on a piezoelectric material used as a substrate, such as quartz, lithium niobate, lithium tantalate, or lanthanum gallium silicate. Both ends of this substrate are capped with a sculpted metal layer as the electro-acoustic transducer, formed from comb-like fingers as an interdigital transducer (IDT), as illustrated in Figure 2.

Figure 2: Comb-like interdigital transducers at each end of the piezoelectric substrate convert impinging electrical energy to acoustic-mechanical energy, the energy wave then travels across the surface, where it is converted back to electrical energy by an IDT at the receiving end. (Courtesy of the University of South Florida)

The electrical signal is applied to one end of the device, converted to acoustic energy by the source IDT and launched across the piezo material’s surface, where it travels as surface-acoustic wave (called Rayleigh waves after Lord Rayleigh, who analyzed them in detail). The energy is then converted back to an electronic signal at the far end by a similar though not identical IDT, designed to capture the energy. Fortunately, the overall electrical/acoustic and complementary acoustic/electrical conversion processes are highly-efficient, reaching 99% or better; this helps maintain SNR and signal integrity.

The SAW filtering results from constructive and destructive interference, due to the wave delays which occur as the wave travels across the surface at between 3000 and 12,000 meters/second (depending on substrate material). The delayed outputs at the receiving end combine, yielding a finite-impulse-response (FIR) filter response. The acoustic energy’s propagation speed is far, far slower than electrical propagation, and thus has mechanically viable dimensions. By adjusting the travel distance and dimensions of the IDT fingers, and thus their impulse response, the standing-wave interference pattern of the SAW device establishes a desired filter center frequency, bandwidth, type, and other factors.

Note that the SAW is completely different in fundamental concept and implementation than a traditional all-electronic, RLC-based filter; it is not just an integrated-circuit, monolithic re-creation of the RLC-type filter. However, the fabrication process is similar in many ways to standard ICs, so SAW devices leverage that well-established technology, investment, and manufacturing expertise. Like an RLC filter, it is a passive device and requires no power supply.

The bulk-acoustic-wave (BAW) filter and FBAR (film-bulk acoustic resonator) are similar at first appearance to the SAW device, but with some major differences. In a BAW device, the acoustic energy travels through the piezoelectric substrate to set up standing waves, rather than across the surface as in a SAW filter. The FBAR is a variation of the BAW approach; it uses etched cavities with suspended membranes within the structure to achieve desired resonances and thus, filtering. In general, SAW devices are at best suited only into the single-digit gigahertz range, while BAW devices are a better choice at several GHz and higher.

Although standard SAW (and BAW) devices are fixed-frequency devices, work is being done to make them perform as tunable filters along with acceptable performance; some of this work leverages MEMS technology. In this way, a single device could be instructed to change its operating frequency “on the fly” to serve several bands, with obvious advantages in cost and space savings.

The primary parameters of interest when selecting SAW filters are similar to those for conventional filters (Figure 3). These include center frequency, bandwidth, insertion loss, attenuation, power handling, and temperature stability. Due to their reasonably good performance, low cost, and small size, billions of these devices are produced annually by dozens of vendors (many of whom are high-volume suppliers but whose names are not generally well known), with tens of thousands of unique model numbers. 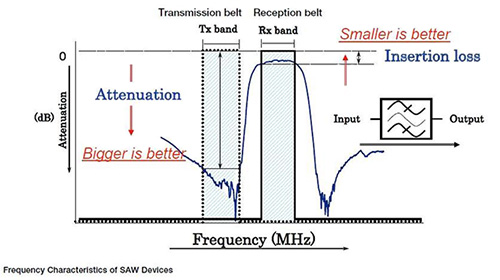 As a result, it is difficult to cite typical SAW specifications, as each available device has trade-offs such as narrower bandwidth but greater loss; there is no SAW device which has the “best” specifications across all parameters. SAW center frequencies span about 50 MHz to several GHz, with bandwidths between one and 10% of center frequency. Insertion loss is between 3 and 30 dB, and return loss can be between 10 and 30 dB.

In general, SAW devices are not intended as filters for high-power signals, but they can usually handle 10 to 30 dBm signals. Of great concern to many designers is their frequency temperature coefficient (tempco), which can be a problem in many situations. A SAW device has a typical tempco of -50 ppm/⁰C. There are also more advanced (and thus more costly) temperature-compensated SAW configurations, which have tempcos as low as -15 to -25 ppm/⁰C.

Two examples of SAW filters used in common applications, each tailored to a specific application niche, show the diversity among the thousands of available units. The F6QA1G585M2AT from Taiyo Yuden is a 50 Ω, single-ended device designed for GPS/GLONASS satellite receivers, with a 1565.42 to 1605.886 MHz passband. Insertion loss is between 1 and 2 dB within this passband, (Figure 4), increasing sharply to better than 30 dB outside the passband. This filter is housed in a 1.1 × 0.9 × 0.5 mm-thick package. 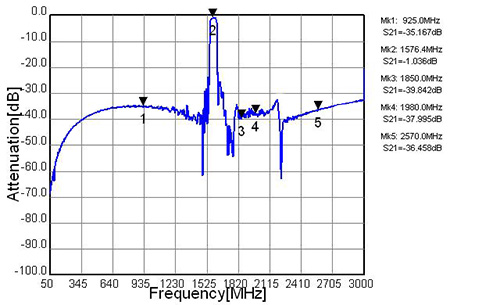 Figure 4: The F6QA1G585M2AT SAW filter from Taiyo Yuden is optimized for use in GPS/GLONASS receivers, with a 40 MHz passband centered at 1585.653 MHz and a sharp drop-off outside the passband.

Also of interest to RF designers are the input and output impedances as shown on the Smith chart, (Figure 5 and Figure 6), needed for impedance matching with circuitry on either side of the SAW filter to minimize standing waves (VSWR) and reflections. 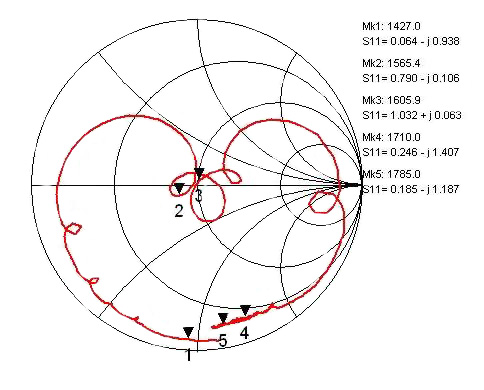 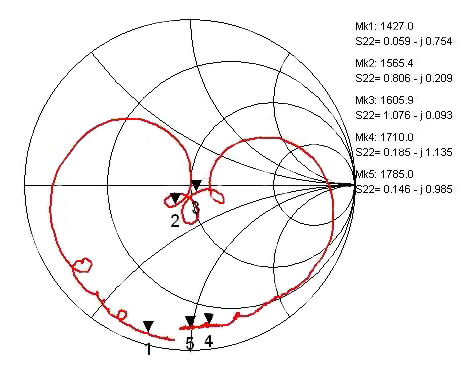 Figure 6: Also critical is the Smith chart of the F6QA1G585M2AT output impedance.

For much lower frequencies, such as used in point-to-point short-distance radio links, the RF2040E from Murata RF Monolithics is centered at 910.0 MHz, targeting bandpass operation between 902.0 and 928.0 MHz. Its 1 dB bandwidth is 31 MHz, while insertion loss is 2.0 dB (typical) and 3.0 dB (maximum). Attenuation close to the passband is 37 dB (Figure 7), increasing to 48 dB further from the passband (Figure 8). Note that this filter is relatively flat in the passband, with about 0.7 dB typical ripple (Figure 9). 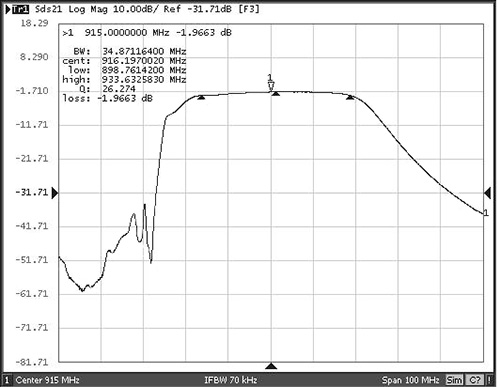 Figure 7: The Murata RF Monolithics RF2040E SAW filter response from 865.0 to 965.0 MHz shows the 1 dB bandwidth along with the asymmetrical response on either side of the passband. 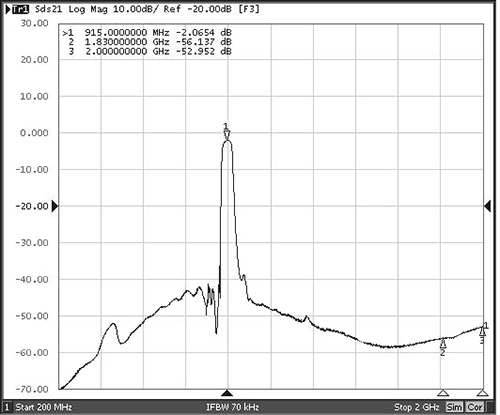 Figure 8: Moving further away from the passband, the attenuation of the RF2040E over the 200 to 2000 MHz range increases by another 20 to 30 dB, as compared to close to the passband. 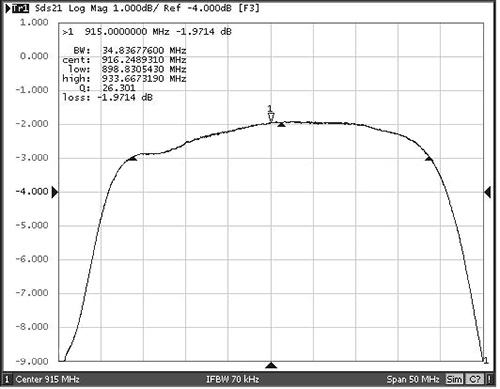 Figure 9: Ripple within the passband is a tight 1.0 dB, which keeps amplitude distortion low and simplifies signal processing. 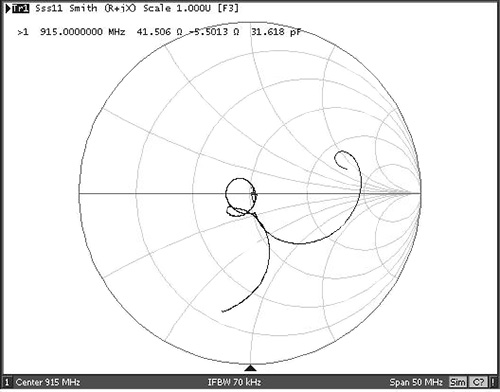 Figure 10: The Smith chart of the RF2040E input is critical when matching to minimize loss and reflections between front-end input amplifier and the SAW filter input. 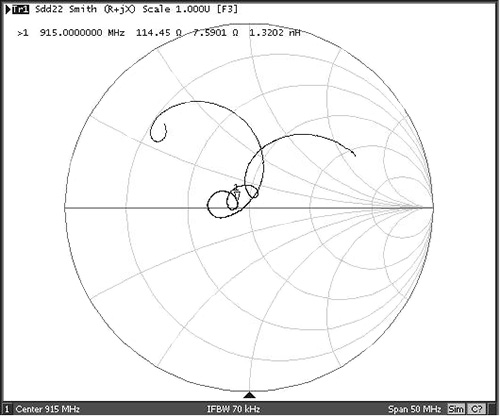 Figure 11: While the RF2040E has a 50 Ω nominal input impedance, the output impedance is 130 Ω; designers must take this into account for the subsequent matching stage.

Filters are critical in all wireless and wired signal-processing systems. If filters had to be built from discrete resistors, capacitors and inductors, today’s high-performance and function-packed RF designs would not be possible due to the size, cost and, most important, the adverse and unpredictable impact of parasitics on the physical filter implementation. Fortunately, acoustic/electronic filters using surface waves on piezoelectric materials—SAW filters—allow IC design and fabrication techniques to be used to design high-performance passive monolithic filters which are tiny, predictable, very low cost, and tailored to meet specific applications requirements. As a result, the engineering task of filter design for RF applications has been changed into one of filter selection, a far easier and faster process.