RTDs, PTCs, and NTCs: How to Effectively Decipher This Alphabet Soup of Temperature Sensors

Need a temperature sensor for your next application? You'll first need to sort through the three-letter acronyms before arriving at any BOMs.


Need a temperature sensor for your next application? You’ll first need to sort through the three letter acronyms before arriving at any BOMs.

This article describes two types of commonly used passive temperature sensors – resistance temperature detectors (RTDs) and thermistors. It aims to help the designer make a proper choice when to use one or the other and shows how to effectively interface these devices to analog signal conditioning circuitry.

Temperature control is fundamental – and may be critical – in many of the various systems that designers are improving or innovating using electronic feedback methods. Let’s start with the amazing detectors first and then move on to the amplifiers.

RTDs operate on the principle of changes in electrical resistance of pure metals, and are characterized by a linear positive change in resistance with changing temperature. Platinum (Pt) is by far the most common element used for RTDs because of its wide temperature range, accuracy, and stability. RTDs also exhibit the most linear signal with respect to temperature of any electronic temperature sensor. Figure 1 shows the excellent linearity of these RTD beasts over temperature. 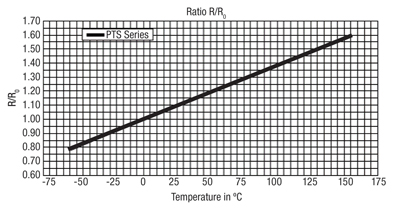 Figure 1: A chart showing the normalized resistance with respect to nominal resistance value at zero degrees Celsius for the Vishay PTS series, a very linear relationship to temperature exhibited by all RTDs. (Courtesy of Vishay).

Equation 1 below shows the widely used third order mathematical approximation of the RTD’s relationship between resistance and temperature – the Callendar-Van Dusen equation. The RTD is more linear than the thermocouple, but still requires curve-fitting over a fairly wide temperature range.

a fourth order polynomial is used.

a quadratically approximated formula is used.

Equation 1: The Callendar-Van Dusen equation has been reliably used for years to approximate the RTD resistance/temperature curve over a wide temperature span.

The Callendar-Van Dusen equation has been around for 100 years, and even though it is not the best fit for platinum RTDs, it is widely used today. Callendar and Van Dusen performed their work well before the advent of modern digital computers. They could not use much more than a third order equation since they had to solve the equation by hand. They used an equation that was reasonably accurate and could be solved in a human lifetime.

In 1968, the International Electrotechnical Commission recognized the shortcomings of the Callendar-Van Dusen equation and defined a 20-term polynomial equation for the resistance versus temperature curve for 100 Ω platinum RTDs (for 1,000 Ω RTDs just multiply by 10). In Callendar and Van Dusen’s day, a 20-term polynomial would have taken several days to solve per temperature point. The arrival of the digital computer made solving such an equation trivial.

Equation 2: The linear equation which approximates the RTD resistance/temperature curve over a narrow temperature span.

Be very cautious to use the proper coefficients corresponding to the standard referenced in the manufacturer’s data sheet to calculate temperature. As seen previously, Vishay’s PTS series uses the IEC 60751 standard with one set of coefficients, but some RTDs might use other standards of calibration, such as ITS-90 or DIN 43760 standards (see Table 1).

Other sources of errors of which the designer needs to be aware are stability, or drift over time, rise time of the sensor to reach some percentage of final resistance with a step change in temperature, and self-heating, which will occur with a current through the RTD device. Heat generated in this way causes the temperature of the RTD to rise and create a false temperature that adds to the actual temperature being measured, thus causing errors. Finally, if the RTD has lead wires connected to it, the resistance of even 5 Ω for the lead wires can add to RTD resistance creating another error source. In this case, if the error is not tolerable, you can help nullify the error in a front-end bridge configuration (see Figure 2).

Figure 2: How to help eliminate lead wire resistance errors in an RTD using a bridge configuration.

An excellent choice as a front-end amplifier would be the Texas Instruments (TI) XTR105 (see Figure 3). This amplifier helps solve the many error problems mentioned before, has current source drive to power the RTD, and even has internal linearization circuitry to improve linearity by a 40:1 margin. An added benefit is the 4 to 20 mA twisted-pair output configuration, which is excellent in a noisy industrial environment. 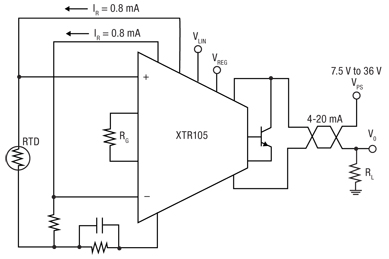 Figure 3: XTR105 with current source drive for the RTD in a two-wire input configuration with 4 to 20 mA twisted-pair output. (Courtesy of Texas Instruments).

The schematic symbol for the RTD is a resistor with an arrow through it indicating a variable resistance and is shown in Figure 4.

Thermistors are thermally-sensitive resistors and are similar to RTDs in that they are electrical resistors in which resistance changes with temperature.

Thermistors have a very high sensitivity, and therefore are very responsive to changes in temperature with faster response times than RTDs, but have a smaller temperature range than RTDs.

Figure 5: Resistance versus temperature for a typical thermistor and RTD. (Courtesy of National Instruments).

Let’s look at some pros and cons of the RTD versus the thermistor in Table 2.


Table 2: Pros and cons of RTDs versus thermistors.

Thermistors, like RTDs, being resistive devices, need an excitation current. The designer must be aware of self-heating just like in the RTD, which is a cause of errors. Lead wire resistance can have the same effect of causing errors in a thermistor as it does in an RTD. Again, a bridge configuration can help solve this problem.

By the 1960s, thermistors were mainstream sensors. Steinhart and Hart, two researchers at the Woods Hole Oceanographic Institute, published a paper defining a temperature versus resistance formula for thermistors. The Steinhart-Hart equation has become the industry standard equation for thermistors.

The classic Steinhart-Hart equation is seen in Equation 3.

In practice, three thermistor resistance measurements at three defined temperatures are made. These temperatures are usually the two endpoints and the center point of the temperature range of interest. The equation hits these three points directly and has a small error over the range.[1]

Since the thermistors’ temperature coefficient creates significant non-linearity contributing to error, this will limit useful applications to very narrow temperature ranges unless linearization techniques are used.

The thermistor can be used over a wider range of temperatures if the designer can tolerate the trade-off of lower sensitivity to achieve improved linearity. One such approach is to simply shunt the thermistor with a fixed resistor. As shown in Figure 6, the parallel combination exhibits a more linear variation with temperature as compared to the thermistor by itself. 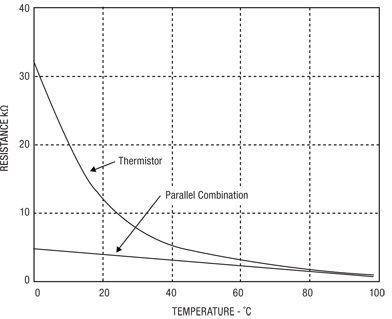 The value of the fixed resistor can be calculated from Equation 4.

Equation 4: Equation to calculate a linearizing shunt resistor for a thermistor.

The schematic symbol for the thermistor is shown in Figure 7.

All things being equal, the choice of a temperature sensor depends on the application.
I hope this brief tutorial will enable you, the designer, to make a robust and fully functional design using the alphabet soup “decoder ring” provided in this article.