The white LED - emitting "white" light from an yttrium aluminum garnet (YAG) phosphor working in conjunction with a blue LED - is an established technology at the heart of many lighting fixtures.


The white LED – emitting “white” light from an yttrium aluminum garnet (YAG) phosphor working in conjunction with a blue LED – is an established technology at the heart of many lighting fixtures. However, an alternative technology called remote phosphor is making inroads because it offers higher efficacy.

Similar to white LEDs, this technology uses a royal blue LED as a photon pump, but instead of combining the LED and phosphor into a single package, the device gains its advantage by separating these two key components.

This does complicate the design process somewhat because instead of specifying an integrated LED/phosphor package from a single supplier for a luminaire, the engineer now to has to consider two distinct parts.

Furthermore, engineers familiar with white LEDs are used to drawing comparisons between devices by considering parameters such as luminous flux (in lumens — lm) and efficacy (lumens/watt — lm/W). Nevertheless, comparing discrete royal blue LEDs is different; manufacturers have historically specified the LEDs’ radiant flux (in milliwatts — mW) instead of luminosity, and efficacy has given way to efficiency (in milliwatts/W —mW/W).

This article decodes the datasheet for royal blue LEDs by explaining the key parameters that should be considered when choosing an LED for a remote phosphor application.

According to findings by the British Library and other august institutions, there is no word for “blue” in Classical Greek literature. Grecian authors tended to describe the sea as a dark (red) wine color and the sky as white. Scholars tend to think the Greeks never identified blue as a separate color because it is relatively rare in nature. Consequently, they just did not recognize blue even when the azure Mediterranean was staring them in the face.

Judging by their contribution to science, math, architecture, and democracy, the Greeks were no fools. Moreover, it turns out that they were not alone in overlooking blue because humans in general have been short-changed by nature when it comes to perceiving the color.

Figure 1 shows how the eye responds to different wavelengths in the visible part of the electromagnetic spectrum. The color-sensing cones in the retina are most sensitive to light of a wavelength of 555 nm (green). The sensitivity of these special cells tails off rapidly towards the blue (and red) part of the spectrum. The cones’ sensitivity to blue light at 472 nm, for example, is just 10 percent of that to 555 nm green. 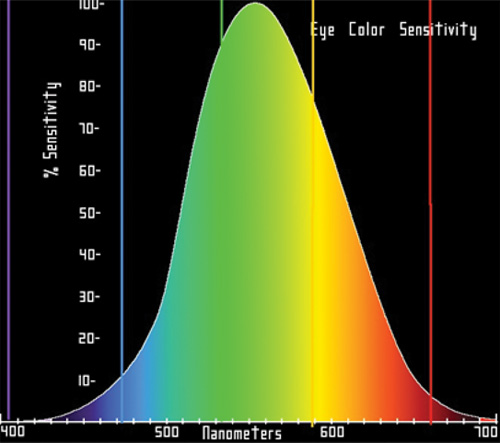 Figure 1: The human eye’s sensitivity as a function of electromagnetic radiation wavelength.

High-brightness LED makers take the human eye’s response into major consideration when designing their products. They appreciate that it is of little use if a device is turning electrical power into wavelengths of light that are barely visible. That is why white LEDs absorb blue light from the central blue device and then re-emit it across a broad range of visible wavelengths comprising some green and red, and a lot of yellow.

Figure 2 shows the spectrum from a high-performance white LED – in this case an OSRAM OSLON SSL device – superimposed on the human eye’s sensitivity function (Vλ). Note the peak at 442 nm that corresponds to light directly emitted by the blue LED that hasn’t been subject to Stokes shifting by the phosphor (see TechZone article “Whiter, Brighter LEDs”).

This peak occurs at a point where the human eye’s sensitivity is poor, so it fails to contribute significantly to the device’s apparent “brightness”. For today’s high-efficacy LEDs, this “wasted” light is not a big problem because they produce a secondary peak centered on 555 nm – right where the eye’s sensitivity is highest. (This isn’t just a happy coincidence; manufacturers have spent a lot of research dollars “tuning” their phosphors to ensure the light emissions occur at this optimum point.) 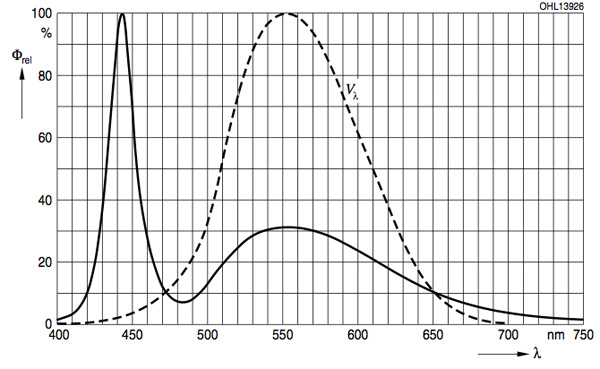 The key parameters of white LEDs

Engineers are spoiled for choice when it comes to choosing a high-performance white LED for their lighting projects. Companies such as Cree, OSRAM, and Seoul Semiconductor produce highly-efficient devices at prices that continue to drop.

The manufacturers have also made comparing devices simple. Checking the datasheet reveals key facts such as the luminous flux (in lumens) and efficacy (in lumens/watt). The luminous flux is a measure of the visible energy or apparent brightness of a light source and as such takes into consideration the sensitivity function of the eye. (Luminous flux differs from radiant flux, which is a measure of the total power of the electromagnetic radiation emitted from the light source, including infrared, visible light, and ultraviolet.)

From a purely scientific consideration, there are several ways to measure the luminous “efficacy” (i.e., the ability to achieve the desired result) of a light source. However, as we are concerned with mainstream lighting here, the most useful definition from an engineering perspective is the ratio of luminous flux (lm) emitted to the electrical power used to power the light source (W).

Luminous efficacy (lm/W) is a key parameter for LEDs because it allows a direct (and typically flattering) comparison with other forms of lighting such as incandescent and fluorescent bulbs (see TechZone article “Material and Manufacturing Improvements Enhance LED Efficiency”). The measure also takes into account how much power is wasted generating heat and nonvisible electromagnetic radiation rather than visible light.

Armed with such information, an engineer is able to select a white LED to suit almost any application.

Cree’s XLamp® XP-G2, for example, is typical of the remarkable devices now at the lighting engineer’s disposal. Using a drive current of 350 mA, the XP-G2 can produce 122 lm and an efficacy of 124 lm/W. OSRAM and Seoul Semiconductor manufacture similarly impressive devices. It is no surprise that LEDs with an efficacy in excess of 120 lm/W are making rapid inroads into the mainstream lighting market. Traditional incandescent bulbs are hard pressed to reach an efficacy of 10 to 18 lm/W. LEDs also perform a little better than compact fluorescent lights (CFLs) (35 to 60 lm/W), and on a par with fluorescent tubes (80 to 100 lm/W).1

LEDs are a fledgling technology and the market is highly competitive, so chip vendors are falling over each other to announce technological improvements that increase the efficacy of their LEDs (see the TechZone article “LED Efficacy Improvement Shows No Signs of Slowing”).

Nevertheless, there is still plenty that can be done. It turns out that the theoretical limit for white LEDs is around 263 lm/W.2 (Incidentally, the highest possible efficacy of any light source is 555 nm green light – the wavelength to which the human eye is most sensitive – which can reach 683 lm/W.3)

Remote phosphor is one technology that is gaining in popularity. The technique builds on research by Rensselaer Polytechnic Institute that revealed moving the phosphor away from the blue die improves efficacy by up to 30 percent (see TechZone article “Remote Phosphor Offers Alternative to White LEDs”). Commercial solutions are available to put the concept into practice in the form of phosphor discs or spheres. One such product is ChromaLit from Intematix.

The phosphor disc must be used with a royal blue LED that acts as a source of photons. There are plenty to choose from, but things can get confusing for a designer who is only familiar with white LEDs.

Royal blue LEDs are highly efficient – approximately 50 percent of the input power is converted to photons – but, as noted above, the human eye just does not see most of the emitted radiation. Consequently, the luminosity is very low, of the order of 10 to 15 lm, and efficacy (in terms of production of visible light per watt of electrical energy) is similarly limited.

However, the poor luminosity of royal blue LEDs, used in both conventional white LEDs and remote phosphor designs, is of minor consequence as the device itself contributes little to the overall illumination of the lighting fixture. Rather, the LED acts as a photon pump, emitting a stream of radiation that is absorbed by the phosphor and re-emitted at wavelengths to which the human eye is most sensitive. It is the luminosity of the phosphor that is most important, not that of the LED photon pump.

The datasheet for a device such as Cree’s royal blue XLamp XT-E LED (Figure 3) does not include a figure for luminous flux. Instead, the output is defined as a radiant flux of 475 mW and there is no mention of efficacy; rather, the manufacturer cites an efficiency of 501 mW/W. Similarly, OSRAM’s royal blue OSLON SSX LED, is rated with a radiant flux of 160 mW and an efficiency of 346 mW/W. (Note that efficiency here is a dimensionless (percentage) measure of power in over power out.) 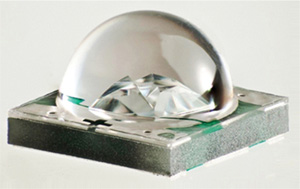 Stating the radiant flux and efficiency for royal blue LEDs – rather than luminous flux and efficacy – is not sleight of hand on the part of the LED suppliers, more a case of accepted convention.

The radiant flux determines the number of photons available for conversion by the phosphor. The efficiency is a measure of how effectively the royal blue LED converts electrical energy into this radiant flux and determines power consumption for a given output.

The phosphors used for both white LEDs and remote phosphor lights are specially designed to emit light around the human eye’s “sweet spot.” However, they can only do this if the incoming photons available for conversion comprise a very narrow band of wavelengths matching the excitation frequency of the phosphor. 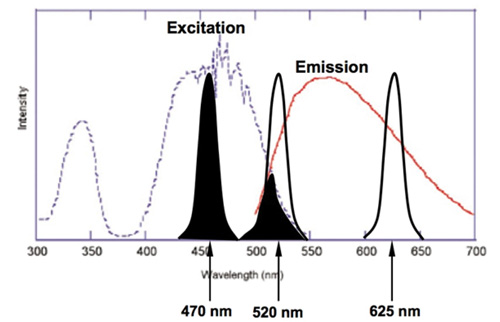 It can be seen that the excitation intensity (and subsequent emission intensity) of the YAG phosphor strongly correlates to the wavelength of the incident photons. Unfortunately, the junction temperature of the photon-pumping royal blue LED does affect the wavelength of the emitted photons. (Note that temperature also has other adverse effects on both the LED’s and phosphor’s conversion efficiencies.)

Figure 5 shows how a temperature increase shifts the primary wavelength of photons emitted by blue, green, and red LEDs. The important fact for the engineer to note is the temperature at which the manufacturer has specified the dominant wavelength of the selected royal blue LED (typically 80 to 90oC) and design the fixture to ensure the die does not heat up beyond this point (see the TechZone article “ABCs of LED Thermal Management”). Otherwise the output of the end design will be adversely affected. 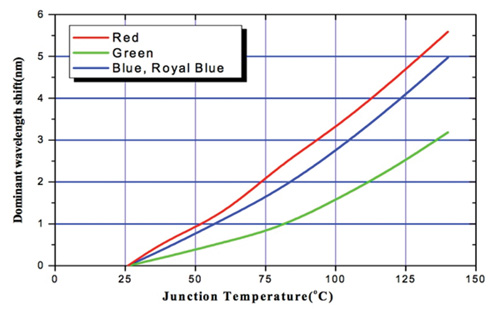 White LEDs are an established and popular technology, but solid-state lighting continues to develop rapidly and alternatives techniques for mainstream lighting are appearing. The promoters of remote phosphor claim that it offers improvements in efficacy of 15 to 30 percent compared with white LEDs running at the same forward current. That has piqued the interest of some designers.

Those designers need to be aware that the convenience of a single LED/phosphor package is replaced with a separate royal blue LED and shaped phosphor disc. A number of commercial LEDs are available for remote phosphor designs, but familiarity with the spec sheet for white LEDs is of little help in specifying a suitable royal blue device for a particular application.

Instead, engineers need to compare radiant flux, efficiency, and temperature stability of their shortlisted LEDs to decide on the best chip for the intended purpose. An informed choice will result in a superior design in a rapidly expanding sector.