Role of BLE in Wearable Technology

Adopting of Bluetooth Smart Ready in portable devices has led to BLE as a popular choice for wearable products which need controllers such as Cypress’s PSoC®4.

The high penetration of smartphones in many mature markets, combined with the wide availability of lower cost MEMS sensors, has lead to the rise of new category of electronics known as wearable devices. A wearable device is a highly portable device that is worn or otherwise attached to the body, and is capable of measuring/capturing information via one or more sensors. Figure 1 shows a generic information flow diagram of a wearable device. 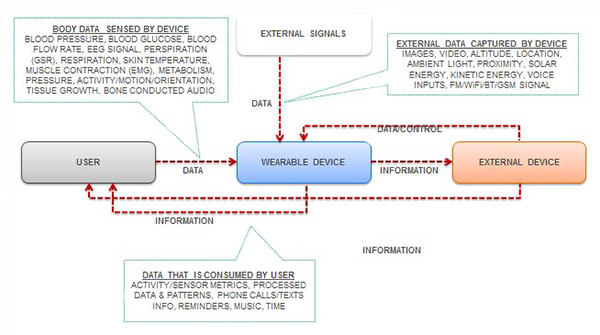 Wearable devices can be broadly classified based on the market segment they serve or the body part on which they are intended to be worn. Table 1 shows the common classifications of wearable devices and their typical use cases.

Most wearable devices are equipped with one or more sensor(s), a processor, storage, connectivity link (i.e., radio controller), display, and battery. Figure 2 shows a block diagram for an activity monitor. 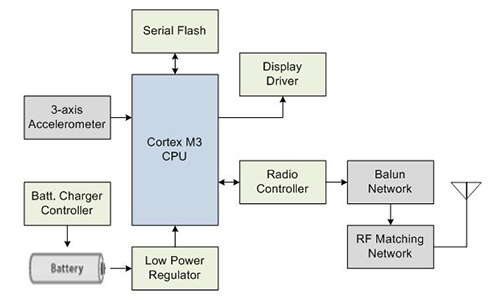 Since these devices are to be worn on the body, there are additional aspects that must be considered which govern the acceptance of these devices:

These aspects are discussed in detail in the next few sections.

To address the limitations, the Bluetooth Special Interest Group (SIG) has introduced Bluetooth Low Energy (BLE) specifically designed to achieve the lowest possible power for short-range communication. Just like Bluetooth classic, BLE continues to operate in 2.4 GHz ISM band with a bandwidth of 1 Mbps. Some of the salient features of BLE are:

A BLE device is not compatible with standard Bluetooth radio as it is a different technology. However, Bluetooth dual-mode devices do support both BLE and classic Bluetooth. Due to the adoption of Bluetooth Smart Ready host (dual-mode devices), BLE eliminates the need for a dongle for its operation as compared to proprietary protocols.

The BLE protocol is a perfect fit for wearable devices for the following reasons:

However, the communication protocol is only one part of the wearable devices. Wearable devices includes many other blocks like sensors, an analog front-end to process sensor signals, digital signal processing to filter out any noise picked up from the environment, storage in which to log information, a processor to implement high-level system-related functionalities, a battery charger, and other subsystems.

Figure 3 shows a typical implementation of an optical heart rate monitor wristband. An optical heart rate monitor works on the principle of PPG where an optical technique is used to detect the change in volume of blood. In this technique, an LED is used to illuminate the tissue and the reflected signal, which carries information related to the change in volume of blood, is measured using a photo diode. 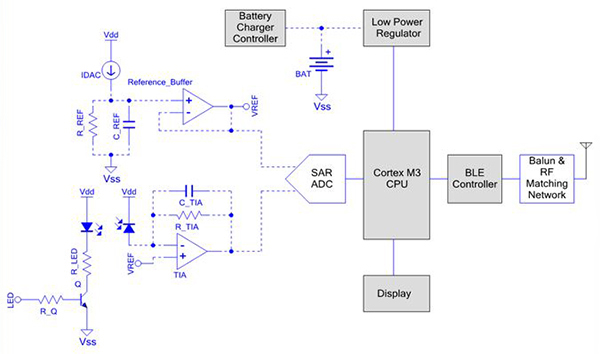 A Trans-Impedance Amplifier (TIA) is used to convert the photo current into a voltage. This voltage signal is then converted into a digital signal using an ADC. This digital signal is then processed in firmware to remove DC offset and high-frequency noise and thus detect heartbeats. Filtering can also be performed in the analog domain using active filters.

Heartbeat information is sent to the BLE controller and then transmitted to a BLE-enabled device using a Bluetooth link. In some optical heart rate monitors, an independent controller is used to perform heart rate processing before communicating this data to the main processor via an I2C/SPI/IART interface.

In such systems, the use of multiple discrete components makes system design more complex in terms of the different parts being electrically compliant with each other and increasing testing complexity. In addition, there is a significant impact on power consumption (due to lack of control over the AFE when it is not in use), BOM cost, and the size of the PCB.

To address these issues, multiple vendors have released devices based on a System-on-Chip (SoC) architecture. These devices not only have a controller but also integrate analog and digital subsystems which can be used to implement the basic analog front end and other digital functionality. One such controller is the PSoC 4 BLE based on Cypress’ Programmable System-on-Chip (PSoC) architecture. This SoC has been designed for the wearables market and includes a 48 MHz Cortex-M0 CPU, configurable analog and digital resources, and a built-in BLE PRoC (programmable radio-on-chip) subsystem. Figure 4 shows the architecture of the PSoC 4 BLE controller. 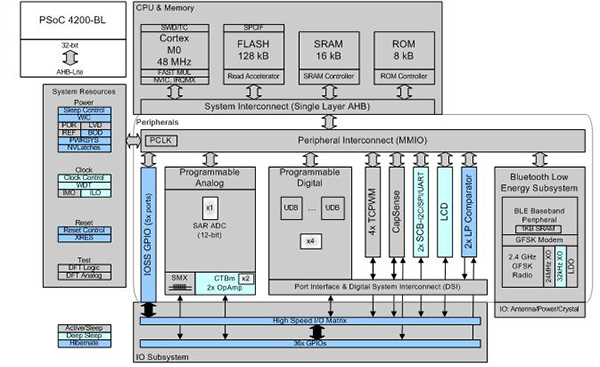 In the analog front, this device has four unconfigured OpAmps, two Low-Power Comparators, one high-speed SAR ADC, and a dedicated capacitive sensing block for enabling advanced touch-based user interfaces. On the digital side, it has two Serial Communication Blocks (SCBs) which can be used to implement I2C/UART/SPI protocols, four 16-bit hardware Timer Counter PWMs (TCPWM), and four Universal Digital Blocks (UDB) for use in implementing digital logic in hardware just like an FPGA.

Figure 5 shows the implementation of the wristband discussed above using a PSoC 4 BLE device. 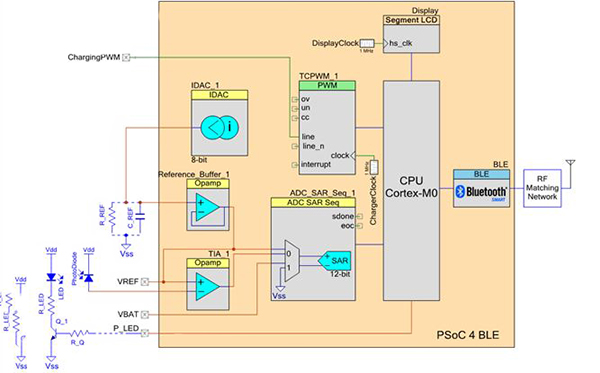 In this implementation, the PSoC 4 BLE device implements all functionality required using its internal resources. The only components required outside the controller are a few passive components and a transistor for driving the LED, and those required as part of the RF matching network. With this integrated approach, developers have control over the power consumption of the AFE and can disable it when it is not in use, thus reducing the system BOM and PCB size. In addition, using an integrated SoC architecture helps reduce time to market:

For some wearables designs, a Cortex-M0 core may not provide sufficient processing power to meet application requirements. For these applications, an M3 core can be used to handle system-related functions while a separate BLE-based SoC like the PSoC 4 BLE controls the Bluetooth interface along with the AFE and digital logic.

Increasing adoption of Bluetooth Smart Ready in devices like smartphones, tablets, and other portable devices has led to Bluetooth Low Energy as a popular choice for the communication protocol in wearable products. To support the power requirements of these applications, various silicon vendors have developed BLE controllers and SoCs supporting BLE. SoCs with BLE helps to reduce system power consumption, BOM, and size of products to make the wearables market even more attractive and promising.