Inductive charging evaluation kit from Cymbet is evaluated and actual performance is discussed.


Wireless transmission of power has come a long way since Tesla’s ill-fated attempt in 1901 to transmit power across the Atlantic. Today you can toss your cell phone onto a ‘charging pad’ and charge it up wirelessly. Tesla would be disappointed that this only works over a few centimeters and not a few thousand miles. But, unlike his tower of power, it works, and works well.

At first glance, inductive charging may seem like a wasteful way to eliminate wires. But with inductively coupled resonant systems achieving efficiencies of over 90 percent, inductive charging has found wide acceptance in commercial, industrial, and even automotive applications. Cymbet’s CBC-EVAL-11 RF Inductive Charging Evaluation Kit (see Figure 1) demonstrates how easily you can utilize this source of energy for RFID, sensor, and wireless network applications. This article will introduce the kit and evaluate its operation. 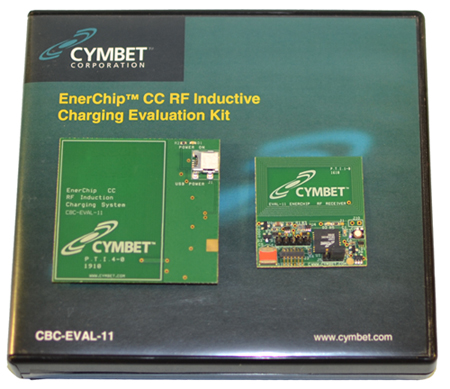 The Cymbet kit consists of an inductive wireless transmitter board operating at 13.56 MHz and an inductive wireless receiver module which charges a thin-film storage battery. Both boards include large printed planar inductors as well as variable capacitors that form resonant tank circuits. The transmitter board is USB powered, while the receiver board contains an EnerChip™ CBC3150 3.3 V/50 µA thin-film battery with integrated power management.

Cymbet’s charging system relies on the magnetic component of an RF field to couple energy, so coupling any a significant amount of power is necessarily a near-field phenomenon. Instead of tightly coupling two coils over an iron or ferrite core, Cymbet's system allows for the separation of two coils that are part of parallel tuned circuits. The efficiency of energy transfer is highly dependent on the design of the coils and is also inversely proportional to the square of the distance between them. Because these variables can be difficult to quantify in practice, Cymbet does not state an efficiency factor for energy transfer, though tightly coupled tuned tank circuits like these are highly efficient over short distances.

Cymbet’s transmitter board is pretty straightforward, but its receiver is quite interesting (see Figure 2). The output of the tank circuit feeds into a full-wave rectifier, the output of which goes through Texas Instruments’ TPS780330220 LDO regulator on the way to becoming VIN for the CBC3150. When VIN is greater than 3.0 V, the CBC3150 routes the harvested power directly to the energy harvesting connector J3 (pin 5). At this point, CBC3150’s RESET line (pin 8) goes HIGH; the receiver’s LED turns on; and the CHARGE indicator on the energy harvesting connector goes low. The EnerChip thin-film battery in the CBC3150 now starts charging; it can go from a completely depleted state to 80 percent of full charge within 30 minutes as long as VIN stays at greater than 3.0 V. The output of the CBC3150 (VOUT) is filtered by a 1,000 µF capacitor to be able to handle high pulse currents when a connected wireless device, for example, may transmit a burst of data.

Figure 2: Schematic of the CBC-EVAL-11 receiver board (Courtesy of Cymbet).


Once the receiver board is removed from the transmitter's magnetic field, VIN immediately drops below 3.0 V; the RESET line goes low; the LED turns off; the charge indicator goes HIGH; and the CBC3150 takes over powering any devices connected to J3. Note that while the CBC3150 takes care of charging its internal battery, on the output side an ON Semiconductor MAX810TTRG reset monitor protects against fast transient glitches.

The CBC3150 (see Figure 3) contains an EnerChip thin-film battery (VBAT, pin 1) as well as a charge pump and charge control circuitry (VCHG, pin 4). The voltage from VIN is applied to the charge pump when it drops below a level required by the load on J3. 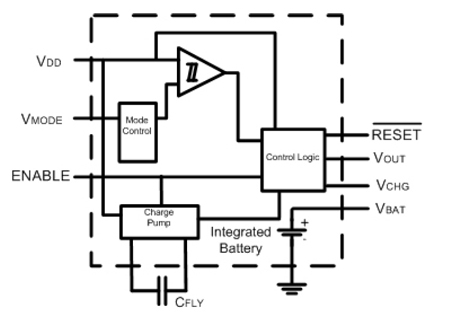 
VMODE in this case is tied to ground. The ENABLE pin turns off the charge pump when low. VOUT is supplied by either VIN or the EnerChip battery. RESET is a digital output (rather than an input) that goes high when VOUT is sourced by VIN and low when it is sourced by the battery.

Both J3 and J4 enable connected devices to have some degree of control over their energy harvesting power source. When the BATOFF line goes high, the ENABLE pin on the CBC3150 goes low, disabling the charging circuits for the EnerChip battery when the battery is fully charged. This prolongs the life of the battery, since its rate of self-discharge is quite low. It is not necessary to keep it topped up when it is not in use.

The CHARGE line, mentioned earlier, is also tied to both jacks and indicates to connected devices the state of the RESET line. On the Texas Instruments EZ430-2500T target board – one of the wireless devices that can plug into J3 – pins 1 and 6 are general purpose digital I/O pins that transmit and receive data, respectively, in UART mode or can act as slave in/master out (pin 1) or slave out/master in (pin 6) in SPI mode.

Thin-film batteries have a number of advantages for energy harvesting applications, though they also have some limitations. The EnerChip battery in the CBC3150 has a self discharge rate of only 1.5 percent per year and can be recharged over 5,000 times in less than 20 minutes from a 10 percent state of charge; given sufficient ambient energy sources, EnerChip batteries can theoretically last indefinitely in ultra-low-power designs. Finally, EnerChip thin-film batteries have a relatively flat discharge curve, similar to coin cells, alleviating the need for external charge pumps in battery-powered, MCU-controlled devices.

On the other hand, the CBC3150 contains a very small battery, so wireless sensor pulse currents in the range of 10 to 30 mA can present a problem. If these pulses are short – in the 5 to 50 msec range – the 1,000 µF capacitor can handle the surge if allowed a minute or so to recharge; however, prolonged high discharge rates can damage the battery. You need to look at your overall power budget if you intend to recharge inductively and consider just how and how often you can affect that charge. 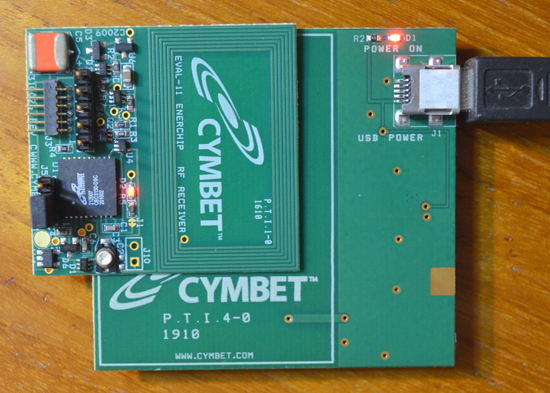 Having looked at the supply side, I was curious how well the board could handle a load. Cymbet specs the CBC3150 at 50 µAh with a relatively constant output voltage up to the point where it falls off a cliff (see Figure 5). To check this out I connected a variable resistor between VOUT and ground (pins 5 and 6 of J4) using the complex test setup shown in Figure 6 to connect an ammeter and DVM. I adjusted the load for 50 µA and went about my business. The CBC3150 did indeed hold up for almost an hour before being fully discharged. 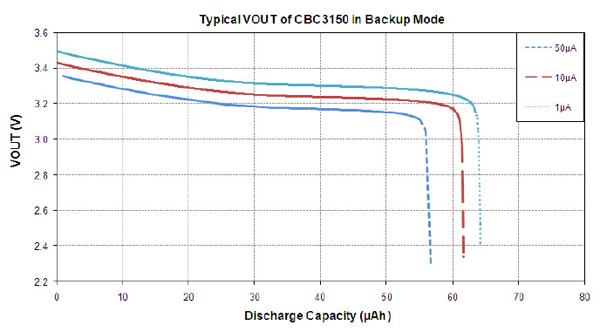 Charging the board up again for 20 minutes, I slowly increased the load until the protective circuits cut out. The voltage did not come back up automatically as it reportedly does when a current pulse is short enough that the large output capacitor can handle it – a ZigBee transmit burst, for example. However, when moving the transmitter board back under the receiver, as soon as the LED lit up – indicating that the RESET line had gone high – VOUT shot back up again, demonstrating that there was still plenty of life left in the battery. 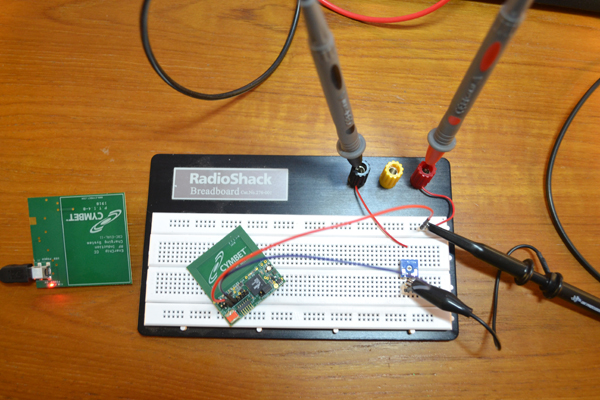 The Cymbet CBC3150, with its integrated EnerChip thin-film battery, forms a very capable power supply for ultra-low-power applications such as wireless sensor nodes. In fact, the circuit shown in Figure 2 would work equally well with other energy scavenging sources, enabling designs that are not dependent on just one ambient power source. If your target application is one that can take advantage of RF inductive charging, Cymbet’s approach deserves serious consideration.